Giant leap for mankind? Or just going over old tracks? Spend enough time in Canberra, and you’ll see every fashion come, go and come back again. The ABC is reporting today that, as part of a review of Australia’s space sector, announced by Industry Minister Arthur Sinodinos, an Australian space agency will be considered. More accurately, that should be reconsidered. For we used to have a space agency — it was called the Australian Space Office, and it was part of the Industry portfolio. It was established by the Hawke government, along with a Space Council, with funding for (inevitably) a Space Program. What happened to the Space Office? Well, Sinodinos would know, because he was an adviser to John Howard when Howard abolished it and the council in 1996. By 2008, rather pathetically, Australia’s entire space function outside defence was reduced to a single mid-level public servant in Industry who had, he told a Senate committee, “one and half people” to help him.

Immigration considers investigating Hun leak. In May, the Herald Sun reported it had obtained documents relating to the case of six Iranian asylum seekers who went on holiday back to Iran despite claiming refugee status. Their visas were cancelled by the department, but this decision was overturned by the AAT. It was part of the flurry of reporting critical of AAT decisions before Attorney-General George Brandis overhauled the decision-making body last month, as first reported by Crikey.

The AAT decisions were reported to be not public at the time, leading to questions over where the leak to the Hun came from. In response to a question on notice, the Department of Immigration and Border Protection said it was currently considering whether to refer the leak to the AFP for investigation. Similarly, the department seems reluctant to investigate what information Andrew Bolt was given about the Manus Island Good Friday incident. The department said it was “unaware” of any leak of CCTV footage of a boy entering the detention centre in the weeks leading up to the incident”, and referred to the matter as a “purported disclosure” that would need “particular facts” in order to be a breach of the Border Force Act.

Plutus payroll scandal widens in PM&C. The scale of the impact of the Plutus payroll scandal is bigger in PM&C than originally reported. In May the Department of Prime Minister and Cabinet suggested just 11 contractors working for the department had been using Plutus Payroll — the company that allegedly defrauded the ATO to the tune of $165 million. After a wider search, PM&C now reports that 23 contractors working for the department were using Plutus Payroll, including Programmed Professionals, First People Recruitment, Dynamo IT, Hays Recruitment, Clicks & Programmed and Horizon One. It has already been stated that the department paid over $1 million through these recruitment contractors to Plutus Payroll.

Bad IT at VCCC? What is going on at the Victorian Comprehensive Cancer Centre? We hear the Peter MacCallum Cancer Centre at the brand-new cancer care and research facility is having problems with its IT network and with NEC, the contractor hired to take care of it. According to a tipster: “Apparently NEC aren’t answering the phone anymore, no changes to the network or firewalls have happened in 6 weeks. The Peter MacCallum Cancer Centre can’t get it’s firewall fixed”.

We asked both the centre and NEC about these issues. The Peter MacCallum Cancer Centre said in a statement: “The firewall is operating normally and there are no operating issues with it”. NEC told us: “NEC has an active working relationship with Peter MacCallum Cancer Centre’s technology department, and is in regular communications with the team and the senior management team to serve their information technology needs.”

Where’s Gladys? Last night’s State of Origin result wasn’t a highlight for New South Wales, conceding yet another series to the Queenslanders. It would have been a difficult night for NSW Premier Gladys Berejiklian, who had a bet riding on the result with her Queensland counterpart Annastacia Palaszczuk — the NSW Parliament building will be lit up in maroon lights following the loss. Ms Tips was a bit confused by the photos Berejiklian uploaded to Facebook before the match — it seemed the premier was not keen to show her face in posts pledging her support. 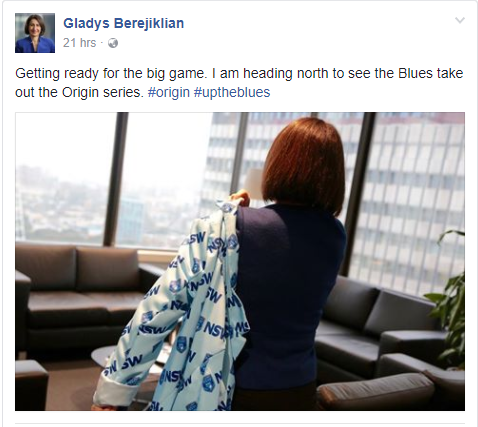 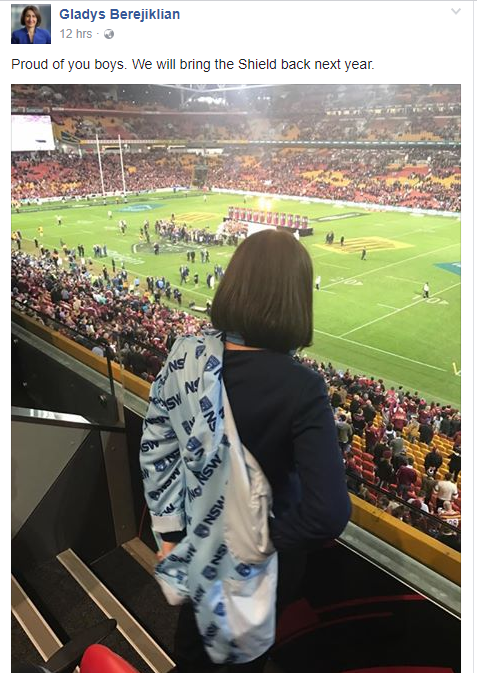 Is Berejiklian a dentist, so she couldn’t show us her face? Was it a body-double? We did some investigating to see if the premier was actually at the game — and it was a post from Queensland Treasurer Curtis Pitt that showed she was actually there: 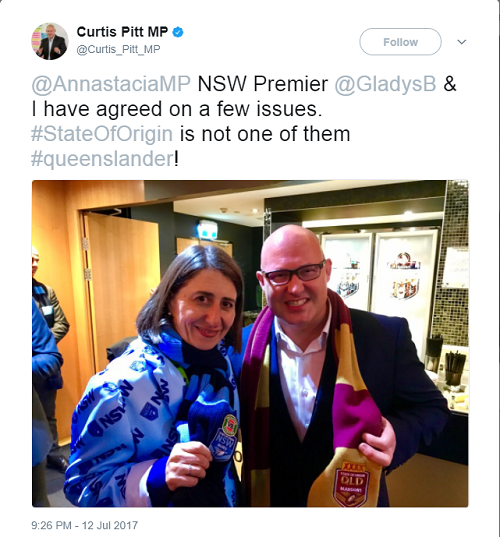 and looking at the pictures, was Gladys only half committed as she couldn’t work out to wear the jacket?
The Origin side had better watch out, she will look for a way to outsource it…

The Hawke government also had a Future Commission but Lyingg ‘back tot he 50s’ Rodent quashed that as well. Future? pfft!
As to “purported disclosures” re Dunnuttin’s Manus paedo claims, there is nothing purported about it – Blot crowed about having been ‘given access to the video evidence’ of a 5yr old boy (PNG sources say 10yr) being “taken by two detainees into their living quarters” when indulging in his regular tongue bath with his Hobbsean (nasty, brutish & short) mate, the Poison Dwarf.
As the Praetorian Guard is well known for being unable to find its collective fat arse with both hands, the evidence is available on the 2GB site as an audio download – surely there is someone sufficiently tekky in the shiny new HQ to manage that?