The Walkley Board has put its foot down over the controversy about the axing of the international award. And other media tidbits of the day.

Today in Media Files, the Walkley Foundation has put its foot down, saying it will not reinstate the international Walkley award category despite protests from the industry, as its arts award finalists have come under fire.

Take a Walkley. The Walkleys Board has put its foot down despite the outcry over its axing of the international Walkley category. Journalists union the Media, Entertainment and Arts Alliance yesterday published a motion saying that although it respected the Walkleys’ independence, MEAA called on the Walkleys board to reconsider the decision. The motion comes after a petition with nearly 500 signatures was handed to the board asking it to reinstate the international category. In changes to the structure of the awards, the international, interview, journalism leadership and artwork categories were cut, and the headlines category was expanded to include tweets and Instagram posts.

But the Walkley Foundation has tweeted this morning the decision was final:

The board has said, and repeated in another tweet, that international awards can and have been entered in all categories, but it would review the decision after the 2017 awards.

Arts award controversy paints a hostile picture. The Walkleys have come under fire from another direction on Twitter, too, after announcing finalists for its arts awards. Media journalist Michael Bodey attacked the shortlist yesterday after his wife, arts reporter at The Australian Michaela Boland, missed out on a nod for her work on stolen antiquities in the last two years.

The finalists were the ABC’s Virginia Trioli and Gus Goswell for a piece on Bill Henson, John Shand for his Sydney Morning Herald piece “Meaning it: Truth, Trump University and Cultural Amnesia”, and Daily Review‘s John Kelly for “Roslyn Oxley9 Gallery and its 33-year winning streak of artists at the Venice Biennale”.

“Walkley noms do arts no favours by doing same old arts thing, boost the nice … cos really, the Oz arts is lovely, innit? No place for investigation, criticism, debate. Four stars all round. Soft,” Bodey said over a series of tweets.

Boland responded by tweeting she was a “bit embarrassed”, but her work might have been “too sleuthy” for the Walkleys. 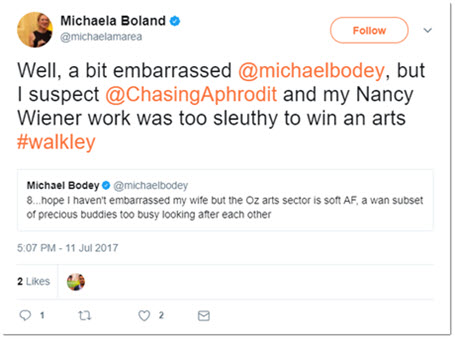 State of Origin tips depend on the paper. Tonight is the State of Origin decider match, so the tabloids in Sydney and Brisbane have gone all-out. The Daily Telegraph has a four-page wrap-around and nine pages of sport dedicated to tonight’s match, while The Courier-Mail has opted for the front page plus an eight-page liftout (including a poster of the team) and another four pages of the sport section. Both papers are, of course, backing their own states’ teams, but the Tele is not holding back in telling the Blues on its front page: “Don’t stuff it up”. 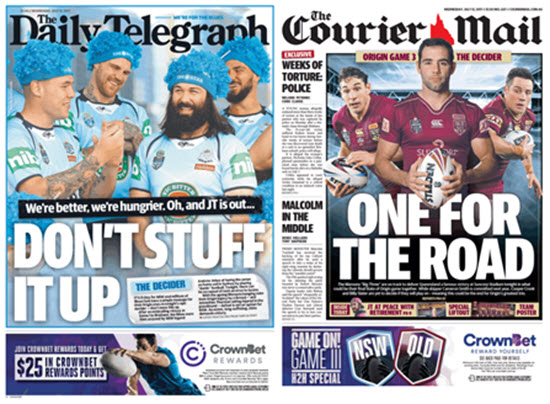 The Sydney paper has even dedicated part of its editorial to the match:

“It is something of a sports cliche to claim that a given contest has everything riding on it, but in this case it is true … For NSW luck should have nothing to do with it. A task awaits completion. Get it done.”

For the record, betting ads don’t discriminate between the Blues and the Maroons — both papers are carrying ads for CrownBet on the front and back page.

Murdoch’s Dow Jones introduces staff quotas, pay rise. The Wall Street Journal must be a rough place to work at the moment. The bean counters are slashing costs by cutting staff numbers, scaling back publishing in Europe, closing half a dozen blogs, and looking to outsource the paper’s Asian printing and publishing business. There is also continuing unease among staff about a perceived pro-Trump stance among the paper’s management (and, of course, owner Rupert Murdoch). Senior staff have left, some for the Journal’s bitter rival The New York Times, and there have been reports of lingering concerns about the paper’s approach to women.

Well, that has now hit the fan with Will Lewis, CEO of Dow Jones, which owns the Journal, issuing a memo to all staff on Monday pledging to improve the company’s performance on gender issues, introduce a 40% quota for female executives across the entire company and give pay rises to men and women to achieve a better balance in pay equality. His memo was reported on the Talking Biz News website.

In terms of News Corp dogma, quotas are a no-no in Australia. But could this target become company wide, in News Corp Australia and News UK? It must be an issue generating a lot of pressures in the Journal because the cost-cutting campaign will not stop to allow for the 2% pay rises or new management program. So the fact that the papers in Australia and the UK are facing cost-cutting efforts can’t be used an excuse for inaction on these points — if it is good enough for the Dow Jones Co, it should be good enough for Australia and the UK. — Glenn Dyer

Glenn Dyer’s TV ratings. A big night for Nine. Australian Ninja Warrior, a win for the news in the metros, and tonight, thanks to Origin game three, they will win again. The Ninjas grabbed 2.13 million, down from Sunday’s 2.32 million debut. The metro audience of 1.47 million was off by around 150,000. With solid wins in the metros by Nine News from 6 to 7pm (but the usual loss to Seven nationally) it was easily Nine’s night.

Seven will not want to talk about last night and the way that Behave Yourself  flopped last night (724,000 nationally), and the way the grubby Yummy Mummies bombed on its second outing (516,000 nationally against 1.2 million on Sunday night after House Rules wrapped up). It meant Seven ran third or fourth from 7.30pm to 9.30pm. All in all, a very bad night for Seven and if the kids program Little Big Shots next Sunday night doesn’t do well (and it will be up against Ninjas) then questions will be asked about Seven’s direction. The network this morning started promoting Blue Murder – The Killer Cop, its long awaited Roger Rogerson telemovie. Is that a sign that it is being rushed into the schedule sooner than later to try and arrest the drop?

State of Origin game three tonight. It’s a big game, it should rate OK. For an NRL follower, it’s the chance to see a couple of the best players ever (although there’s sadness at not seeing perhaps the best ever in Jonathan Thurston). Even a NSW supporter like me relishes the chance to see Cooper Cronk, Billy “The Kid” Slater and Cameron Smith grace the State of Origin for perhaps the last time. These players have been a joy to watch. And will this be the last Origin called by the great Ray Warren for Nine?  — Read the rest on the Crikey website

Given the continuing seemingly immovable gender inequality, especially for executive pay rates globally, the WSJ’s decision to introduce a 40% quota could be seen as a cost cutting measure too