Prime Minister Malcolm Turnbull's London speech about the Liberal Party is still making waves, and Cricket Australia could be ready to compromise on its contract spat with players. It's the news you need to know, by Emily Watkins and Max Chalmers.

Prime Minister Malcolm Turnbull‘s London speech is still dominating the news, with The Australian reporting that it has backfired. The speech, in which he said the Liberal Party was not conservative, is now being used by Cory Bernardi‘s Australian Conservative movement and One Nation as a recruitment tool. Fairfax reports that the federal cabinet has rallied around the PM on his comments, but political consultant Lynton Crosby has said the party should focus on values and policies rather than internal politics. Former Victorian premier Jeff Kennett has said the speech showed “appalling lack of political judgement”, The Sydney Morning Herald reports.

Turnbull has also met Queen Elizabeth while in London. The former head of the republican movement in Australia declared himself an “Elizabethan” ahead of the meeting, Fairfax’s James Massola reports from London.

Donald Trump Jr has given critics their greatest evidence yet that his father’s campaign colluded with Russia in its efforts to defeat Hillary Clinton.

On the weekend, The New York Times reported that Trump’s eldest son had joined Jared Kushner and former campaign chair Paul Manafort in a previously undisclosed meeting with Kremlin-linked lawyer Natalia Veselnitskaya. The story evolved from there when sources told the Times that the meeting had been premised on providing damaging information about Clinton. Today, Trump Jr took things into his own hands, tweeting copies of the email exchange in which the June 2016 meeting was set up after learning the Times was about to publish their content.

In one email, Trump Jr is told by publicist Rob Goldstone that a Russian prosecutor had offered to provide dirt on Clinton “as part of Russia and its government’s support for Mr. Trump”. Trump Jr wrote back: “If it’s what you say I love it…”. Democrats smell blood and have now called for Trump Jr to testify before an open hearing as part of the Senate’s investigation.

In response to the growing focus on his son, Donald Trump praised Trump Jr via a spokeswoman as “a high-quality person”.

At the very least, the email makes it look as though the Trumps would have colluded, even if they did not. But it could be worse than that. Vox asked 17 legal experts for their opinions: 12 said the case for collusion was now close to conclusive.

Cricket Australia is losing its battle with the Australian Cricketers’ Association over a contract dispute, The Australian reports. CA board member and former captain Mark Taylor has weighed in, urging a compromise, as has Turnbull from London. Taylor said the board wanted a quick end to the dispute, and that both sides needed to compromise. Players are now unemployed, and the Australia A tour of South Africa was cancelled over the dispute.

It’s the battle of the exclusives between the Australian Financial Review and The Daily Telegraph today (a small story is also in The Australian, but they didn’t break out the red ink). Both reported on government modelling for a plan to increase the cost of selling high-emission cars so the government can meet its obligations under the Paris climate change commitments. Many of Australia’s most popular cars would be taxed. The Fin‘s industry sources says the scheme, if it goes ahead, would be stricter than planned European standards because there would not be a broader carbon credit exchange allowed to offset cars falling above the threshold. The Infrastructure Department has told both newspapers the proposal is still out for consultation. 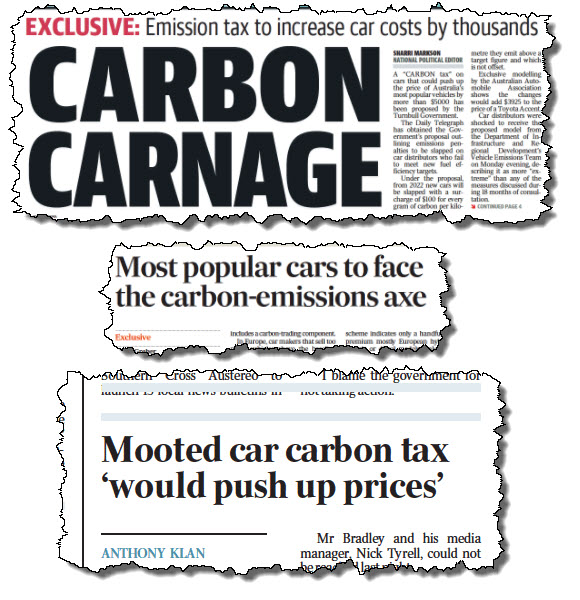 Centrist message right, but Turnbull loses on philosophy — Paul Kelly (The Australian $): “The key to Turnbull is that he is a pragmatic policy centrist but not a cultural conservative.”

David Gonski’s next task is to work out how to spend schools money effectively — Ross Gittins (The Age): “Because the act will unwind the special deals the previous Labor government did with particular state- and private-school systems, moving federal funding on to a uniform basis across the country, it produces both winners and losers among the states and religious school systems.”

China will block the use of virtual private networks (VPNs) that allow citizens to re-route traffic and access websites banned in the country. Sources told Bloomberg the directive to Chinese-run telcos would come into effect in February next year. — Bloomberg

The Syrian Observatory for Human Rights says it has confirmed that Islamic State leader Abu Bakr al-Baghdadi is dead, although the US and other groups on the ground in Syria have not been able to confirm the claim. — Reuters

The Islamic State is not dead yet (New York Times): “While the Trump administration will be right to celebrate the end of the caliphate as we know it, it is far too soon to feel comfortable, especially in the absence of a strategy for the day after Daesh. Even when the Islamic State is defeated militarily, the political and economic conditions that facilitated its rise — unleashed in part by the 2003 invasion — will continue to fester.”

China cracks down on video games (Bloomberg): “For the Chinese government, the perceived isolation and distraction of its youth is viewed as an increasingly urgent social problem. Immersive role-playing games, popular among students at ubiquitous internet cafes, are seen as a particular threat. As far back as 2004, state media reported that 90 percent of juvenile crimes were related to excessive internet use.”

Australia’s refusal to join nuclear arms ban treaty “gutting” to Aboriginal victims (BuzzFeed): “Not only did Aboriginal people near Maralinga and Emu Field suffer health problems following the nuclear tests, but they were also left dispossessed of their traditional lands. Many still fear it is unsafe to traverse their country despite clean-up efforts.”

Paying professors: inside Google’s academic influence campaign (Wall Street Journal): “Some researchers share their papers before publication and let Google give suggestions, according to thousands of pages of emails obtained by the Journal in public-records requests of more than a dozen university professors. The professors don’t always reveal Google’s backing in their research, and few disclosed the financial ties in subsequent articles on the same or similar topics, the Journal found.”

What happened when Walmart left (The Guardian): “There are some rays of hope piercing through the dense ancient forest of McDowell County. Some families are trying to avoid the long drive to alternative outlets and the heavy prices by growing their own food.”

A riptide swept away a Florida family. Then beachgoers formed a human chain. (Washington Post): “There was no lifeguard on duty, and law enforcement on the scene had opted to wait for a rescue boat. People on the beach had no rescue equipment, only boogie boards, surf boards and their arms and legs. “Form a human chain!” they started shouting.”

Sydney: Reserve Bank of Australia to release credit and debit card data for May

Sydney: Public hearing as part of Parliament’s Inquiry into the Use and Marketing of Electronic Cigarettes and Personal Vaporisers in Australia

Canberra: The protesters who glued themselves to the railing of the public gallery in Federal Parliament will face court.

Bristol, UK: ICC Women’s World Cup, Australia v India. The Aussies will play be playing for a guaranteed spot in the semi-finals.