Why the F-35s are asphyxiating pilots. We can add a little more detail to the most recent entry in the encyclopedia of problems with the “flying heap of crap” F-35 stealth fighter jets Australia seems bizarrely intent spending billions acquiring (though as a reader recently suggested, we might not want to call them flying heaps of crap, as they cannot fly). We hear that the recent problems with the Australian F-35 testing — that pilots were blacking out in the cockpit due to oxygen deprivation (or hypoxia) — are due to jets flying in close formation, with following jets sucking fumes in from leading jets’ exhaust.

Beam us back down. You might have seen on social media today the remarkable headline “First object teleported to Earth’s orbit” from the BBC , and various other, slightly less inaccurate headlines, like “Scientists teleport photon from Earth to orbit“. In fact — as the BBC report actually makes clear — no object of any kind was “teleported”, not even a photon. Teleporting objects doesn’t exist outside science fiction; any journalist or subeditor claiming it does is welcome to step into the first transporter and give it a whirl.

What has happened is that a Chinese experiment to test quantum entanglement — in which pairs or groups of particles share a state such that any effect on one particle has an effect on both or the whole, even if the particles are separated by a large distance — has reached its next stage. Last month, it was reported the Chinese had succeeded in firing a stream of “entangled photons” at a satellite orbiting at least 500km above the Earth. The next stage was to test whether the phenomenon of entanglement — or what an alarmed Einstein called “spooky action at a distance” — still applied to the photons that had been received by the satellite. We now know at least one photon on the satellite remains entangled, and thus will react to forces applied to its counterpart on earth. Nothing has been “teleported” except information.

So what’s the big deal, given we can already transmit to satellites very quickly anyway? It’s a very big deal: if you can instantaneously transmit information from the Earth to a satellite, you can do the same to and from an interstellar spacecraft — potentially ending one of the key problems of interplanetary exploration, the inability to communicate in real time with spacecraft. Indeed, as NASA’s Badri Younes told Crikey in 2015, NASA has been working on quantum entanglement as a solution to their communications problem for some time. It also offers a new horizon in cryptography, because you would no longer have to transmit information — when it can be intercepted — but use quantum entanglement instead. If anyone “intercepts” the entangled particles, the entanglement is destroyed. Scientists have entangled over long distances before, but this is a new record, and the first time outside the Earth’s atmosphere.

Qatar picks up Singh’s bill. The issues of travel expenses, Qatar and Labor policy toward Israel and Palestine have all been in the news lately — and certainly Ms Tips raised an eyebrow while looking through Tasmanian Labor Senator Lisa Singh’s current interests register. She recently spoke about her parliamentary visit to Palestine and Israel during April and May of this year. Her declaration revealed that her trip was paid for by the Palestinian Authority (their role in organising the trip is mentioned in her speech) and none other than the Qatar government. While there’s no suggestion of impropriety, we did wonder what Australia’s best buds Saudi Arabia would make of that, given current tensions with the tiny Gulf state. 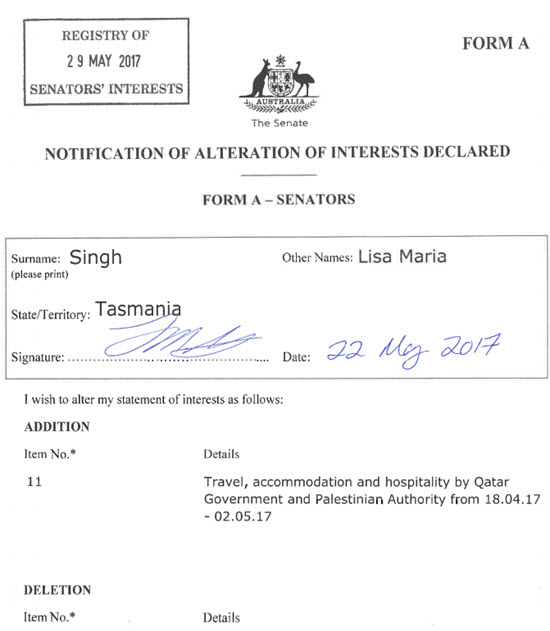 Impact of speedily imposed speed limits limited. Amply making the case for taking things slow, the enforcement of the new speed limit around emergency vehicles in Victoria — recently rushed through by the Andrews government  — has run into trouble. From July 1, drivers have to slow to 40km/h while passing emergency vehicles with flashing lights. However, the Victorian Police have confirmed to 3AW’s Rumour File that an “administrative error” meant they could not issue infringement notices (and had to withdraw existing ones — although they will be held over and might be reissued). This is because the new penalty code book does not yet have a code number for the new offence.  “It appears the error was made when assigning an offence code to the new rule in the Road Safety General Regulations,” Victoria Police said in a statement.

Don’t get the impression this administrative issue gives you carte blanche to careen around emergency vehicles, though: “Motorists are reminded that the legislation came into effect on July 1 and is still enforceable with police able to proceed with the offence by way of summons.”

The Australian connection. We hear from a tipster that Rob Goldstone — the former tabloid journo who says he set up the controversial meeting between Donald Trump Jr and Kremlin-linked lawyer Natalia Veselnitskaya during the Trump election campaign — used to work for AAP out of Sydney in the 1980s. Know more? Send us an email.

Slow down, you move too fast. As part of the campaign around the NBN reaching the halfway point in number of Australian households (5.7 million to be exact) able to connect, NBN Co has released an ad as a moment of self-congratulations. Tech site Gizmodo pointed out, however, that it might not be the best advertisement for the service. In one grab of a speed test taking place on screen, it shows a download speed of 22Mbps and a ping (response time for a computer to talk to another computer via an NBN connection) of 598 milliseconds. The speed is good, but the response time is atrocious. Generally for gamers, you want a ping in double digits for no lag. Close to 600ms is going to be seriously awful. It’s possible here that NBN was showing off its satellite services (where ping is likely to be much higher), but that wasn’t clear from the ad. Maybe One Nation senator Pauline Hanson will have something to say about this? She is keen to improve gaming. 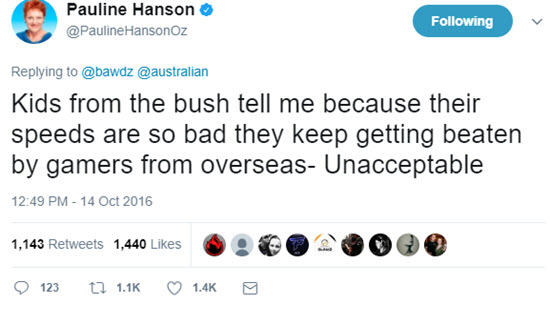 “Qatar picks up Singh’s bill.” C’mon Crikey!! If I wanted to read that kind of putdown I’d buy one of Murdoch’s rags. I expect better from you.

Just a (sad) confirmation that the NBN promo speed test screenshot is exactly what mine looks like on a good day. Alas the bloody laws of physics refuse to allow ping times below about 590 milliseconds using the Sky Muster satellite.
Of course, should you try using a VPN on an NBN satellite connection… ping times can regularly reach 1000+ milliseconds!

Re the Singh/Qatar snark – as that great philosopher Seinfeld “not that there’s anything wrong with that”.
In which case, why tsk-tsk over it without showing the junkets & endowments lavished on the Member for Haifa Ports?

I hate myself for saying this, but good on Pauline for standing up for gamers! I’m a proud member of ToG (The Older Gamers).
It’s a real shame Malcolm sold his soul to the devil to make such a crappy NBN, it could have provided a lot of benefits to Australians in a lot of areas, including (but not limited to) health, small business, education and social links (especially for older Aussies). NBNCo really need to look at their business model, especially the whole AVC/CVC thing.