BAE builds fences. Eight companies have been contracted to build the new fence around Parliament House, and it seems the government is going all out on it. BAE Systems Australia, Lend Lease, Clayton Utz and Sparke Helmore Lawyers are among the companies picked to build what is expected to be a “thermal fence” around the front of Parliament. It’s not quite clear what a company normally associated with building missiles and other defence gear will do in building a fence, as much of the detail around the construction of the fence remains a secret in order to protect it from “vulnerabilities”.

It’s part of a wider overhaul of security in Parliament that will upgrade CCTV cameras and the security systems in and out of the car parks in Parliament. Pictures show the current offering is not that high-tech — but with so many consultants on board, we expect that to change. 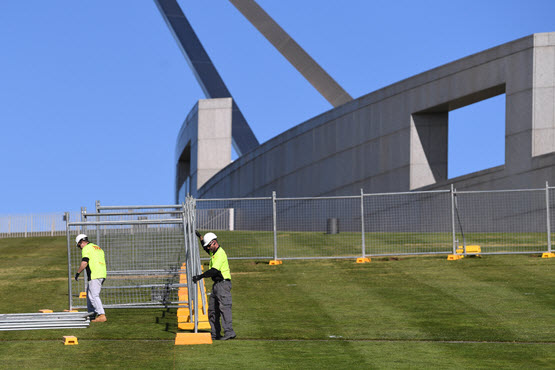 Stop us if you’ve heard this one before. The budget for the F-35 has just blown out again. This morning, Bloomberg in the US reported:

“Total acquisition costs for Lockheed Martin Corp.’s next-generation fighter are expected to rise about 7 percent to at least $406.5 billion, according to figures in a draft document known as a Selected Acquisition Report.”

However, it’s yet to be seen whether all of the increase is because of yet more cost overruns or because the Pentagon has changed its mind about how many planes it wants. The report comes three weeks after the US Air Force allowed the planes back in the air despite not having worked out why some pilots had blacked out due to lack of oxygen while flying them. And for the record, Crikey has checked how much we’ve spent on these flying pieces of garbage so far. According to the Austender website, we’ve coughed up $3.271 billion to Lockheed Martin. No wonder Lockheed’s share price has been routinely setting new record highs over the last two years and has more than doubled the performance of the Nasdaq. In fact, Lockheed’s share price has doubled since December 2013. With mugs like our Defence Department, that’s set to keep going up.

Cherry Bar the place to be. It seems if you’re pro-equality, Cherry Bar in Sydney is the place to go. After gaining notoriety as the venue where Christopher Pyne said marriage equality would happen sooner than everyone thought, the venue will now be the site of the Sydney Swans’ pre-drinks before the upcoming Pride Game against St Kilda.

White suit brigade? The Australian ambassador to the US, our very own cigar-chomping former treasurer Joe Hockey, hosted a party over the weekend in Washington for 400 of his closest American friends, marking 100 years of mateship between the two countries. Of course the party was an Australian barbecue, giving Hockey the chance to serve his guests Australian beef and lamb. And we had to share Hockey’s choice of outfit. Wearing white pants, a light blue paisley shirt and canvas shoes (with no laces), Hockey also sported a panama hat. We wonder if he told the Americans what “slip, slop, slap” means. It isn’t what Ms Tips would call a traditional BBQ outfit — there’s no thongs, shorts or singlet, and no sign that beers were served out of an esky. 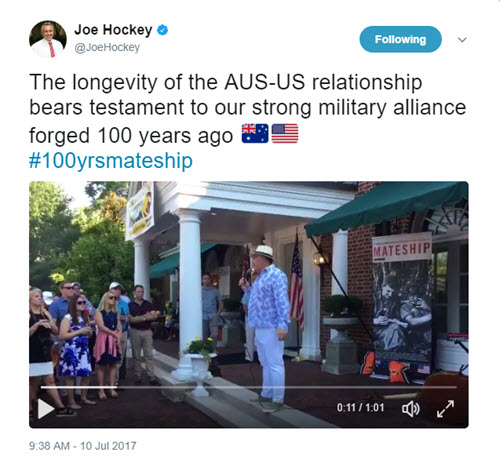 Few comments on the fence.
Lawyers to build a fence! I’ve never known one of those parasites who could even drive a nail into a lump of wood. It’s bound to have lots of loopholes in it.
And why the fence? Did not our FEARLESS (yeah right.) leaders tell us to be a lert not a larmed, to carry on normally, not to let terrorism change our lives and don’t let the terrorists win. Great example they set. Has any other country done something similar, or is it just our pollies who are cowards?
Perhaps it is not fear driven maybe the pollies don’t like us peasants cluttering up their lawn and spoiling the view. Then again, thinking about, it the fence serves both purposes

The fence will also protect the trough. You don’t want the peasants getting their snouts in too, do you?

Thinking about the fence some more, yeah OK I’m a bit slo.
A “Thermal Fence”what the heck is that?
Could it be a large radiant electric heater around the building so the pollies could sit out on their private lawn during a Canberra winter?
Perhaps a continual chain of BBQs, ideal for a sausage sizle to which selected peasants could be invited (outside the ring naturally) so a pollie could show what a nice chap he is.
Or how about a continuous circular trough to prevent the poor pollies getting their snouts cold.
I wondered if perhaps a chain of flame throwers but then remembered the dumb pollies had given all the gas away to Big Oil and there isn’t enough left to run them.
And for a similar reason it can’t be an electric fence.
Perhaps as the JSF 35 cant fly they could be parked at intervals around the building and the jet blast from the engine used as a fence.
I am available as a Consultant if needed.

I hope that the original intent of the design – that the People should be able to take their leisure on the lawns on Their Parliament – doesn’t go down the memory holes.
The last time I saw the history exhibition of the new Parliament House planning that small fact has been disappeared.