With knowing nods, winks and half smiles, Kenny told his exclusive band of viewers of his “Heads Up” segment on Sky News to prepare for something momentous. This was, he told us breathlessly, a “very, very dramatic story” about “serious science”.

“There’s been quite a dramatic paper released by some of the world’s leading climate scientists,” Kenny went on, pausing for effect.

The Nature Geoscience paper is about the difference between observed and modeled temperature rises, analysing “global-mean tropospheric temperatures from satellites and climate model simulations to examine whether warming rate differences over the satellite era can be explained by internal climate variability alone”.

Wrong. There is no global warming pause, as has been widely and repeatedly made clear, for example, here, here and here. Even worse, the paper he referred to said nothing of the sort.

About five seconds into Kenny’s TV, ahem, “report”, he decided to stop being even slightly accurate. “What they’re saying here is that the warming they have on their graphs, on their modelling, is much higher than the warming that has actually occurred.”

The paper didn’t say this either.

Kenny then went on to quote repeatedly and triumphantly from the paper’s abstract, not the paper itself. Which is a bit weird. It’s like quoting from the back cover of a book, not the book itself. (The abstract of academic papers is typically publicly available, whereas the papers themselves are usually restricted to researchers or universities.) For such a huge, serious science story, wouldn’t you cite the actual paper? Unless, of course, you don’t have access to the paper. And if you don’t have access, have you actually read the thing? 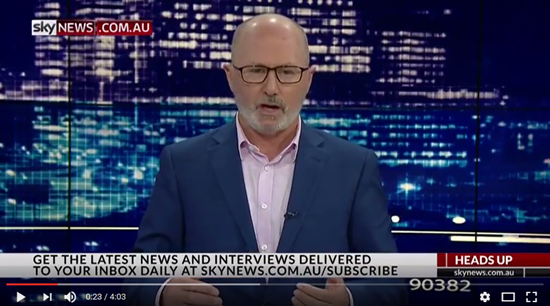 Kenny quoted the last line of the paper’s abstract:

“We conclude that model overestimation of tropospheric warming in the early twenty-first century is partly due to systematic deficiencies in some of the post-2000 external forcings used in the model simulations.”

This, he said, meant that scientists were overstating temperatures. Hence the momentousness of his”story”. Problem is, the paper didn’t say this at all.

If he’d read the last line of the paper itself — and it’s questionable as to whether he read the paper at all — he would have read this:

“Although scientific discussion about the causes of short-term differences between modelled and observed warming rates is likely to continue, this discussion does not cast doubt on the reality of long-term anthropogenic warming.”

Kenny didn’t report this, though. If he had, he wouldn’t have much of a story. However, he did claim that the paper showed that climate scientists’ models were wrong, that temperatures were overstated and therefore climate change wasn’t such a problem.

Kenny is the earthly representative of his spiritual mentor, Andrew Bolt, who misreported the same story, but went one further, saying that the paper’s lead author, “leading alarmist Ben Santer, now admits the world isn’t warming as predicted by global warming models”.

Not only is Bolt’s report as untrue as Kenny’s — if not more so — but Santer has been at pains to make clear the opposite is the case. For example, he published a fact sheet to accompany the paper Kenny and Bolt reported on. Wait a moment, I here you say, there was a fact sheet? Indeed. As Santer explained to me:

Funnily enough, the fact sheet completely contradicts what Kenny and Bolt reported. For example, it says this:

Do the problems in representing these external cooling influences point to systematic errors in how sensitive the models are to human-caused greenhouse gas (GHG) increases?

Answer: No, not at all. We are talking about known, well-studied problems with some of the external, climate-influencing “forcing factors” that were used in the model simulations. These problems have nothing to do with the issue of how sensitive models are to GHG increases.

The fact sheet also discusses cooling and, also rejects the notion that there’s been a pause that Kenny and Bolt reported, saying this:

In a recent paper in Scientific Reports, you find that satellite measurements do not show any signs of “leveling off” of tropospheric warming over the past two decades. Aren’t those findings at odds with the findings of the Nature Geoscience paper?

Answer: No. The findings of the two papers are entirely consistent. The Scientific Reports paper compares the satellite tropospheric temperature trend over the past 20 years with many samples of 20-year trends obtained from model simulations of natural internal climate variability. Even though the most recent 20-year warming trend is smaller than in earlier parts of the satellite record, it is still significantly larger than the range of 20-year trends caused by internal climate variability alone. From our Scientific Reports study, there is no evidence that satellite data show “levelling off” of tropospheric warming in the last two decades.

Despite a fact sheet accompanying the scientific paper they claim to be reporting on, Kenny, Bolt and a bunch of other climate sceptics have reported the exact opposite — Bolt in particular, who is syndicated internationally, especially on a host of foetid climate-denying blogs. His sloppiness — and perhaps dishonesty — in reporting this paper has already been widely disseminated.

This is but one example of what regularly happens if there’s a difference between complex climate models and reality, a difference regularly exploited to suggest climate change isn’t happening or is in doubt.

But take a step back for a moment and think about modelling anything: how you will brush your teeth compared to how you did brush your teeth; modelling economic outcomes versus actual economic outcomes; or modelling visitor numbers compared to actual visitor numbers. There will always be differences because models and reality aren’t the same thing. This is despite the fact that climate models are actually accurate (for example, see this, this and this).

Climate change should be in the headlines every day, and so should all the other problems that constitute the Anthropocene era we’re living in, but they rarely are. The only front page Kenny’s story should be seen on is that of a Press Council adjudication.

A common delusion among the non-modellers is the pervasive belief that there is some sort of restoring force, some mechanism that would somehow bring the excess of CO2 back to the preceding long-term level. Sadly, there is no such force. The past few million years have been remarkably similar because there has been no major perturbations to shift the concentration to some other level. Short term, yes, such as the buffering action of the ocean surface damping out swings in the atmosphere concentration. However, for long-term restoration there is only the slow weathering of rock to be accelerated by the increased heat and CO2. In the absence of grand acts of Nature, into the intervening hundred thousand years or so, we are just going to bake. And even then, we don’t know what the new level would be.

“pervasive belief that there is some sort of restoring force”
Most statistical techniques are based on assuming Gaussian distributions and they do revert to the mean. Reversion to the mean is not nearly so common in nature.

The first sentence of Chris Kenny’s column in the corral for loonies (AKA Inquirer in the Weekend Australian):
‘If there is one economic issue where the ideological prancing and post-material indulgence of the media/political class clashes violently with the daily priorities and pragmatic common sense of the mainstream, it is energy policy.’
How can this man be taken seriously by anyone?

Easy – by mainstream he actually means Bolt, Abbott, himself and others of their kind ie rusted on ideologues. Meanwhile middle Australia rushes on with rooftop solar at a pace faster than that when they took up color TV, and soon will follow up with battery storage and EVs with similar gusto.

I find it incomprehensible why such people with such a demonstrative dearth of comprehension skills are paid to fill such positions of influence – unless they’re there to nurture and cultivate ignorance (remembering that Limited News has a ‘Professional Code of Conduct’).
Blot (perhaps?) watched Monty Python’s The Life of Brian and came out with the perception that “The Life of Brian is a film that mocks Christ as “just a naughty boy””?
He’s a clown – Kenny his apprentice.

“Wait a moment, I here you say, there was a…” SpellChecker but, alas, not a human subbie who might recognise a homophone.
One wonders what exactly Blot & his ilk are going to do when, not if, their unceasing rearguard actions in favour of neolib pollution & profligacy are finally shown to be utterly meretricious mendacity.
The prerogative of the courtesan throughout the ages, power without responsibility, cushioned by a big pile of filthy lucre.

These two professional sycophants are just doing what they are paid to do, pleasing their lord and master by asking “what would Rupert say”