Turns out Ten owes CBS a bundle. And other media tidbits of the day.

Today in Media Files, Ten’s creditors have been revealed, and it looks like the company didn’t have to be pushed into receivership. Plus: the ABC has cut its Radio National religion editor as its local content production slips.

Ten creditors revealed. In what appears to be a scoopette this morning the Fairfax Media tabloids had details of the creditors to the Ten Network, and they make sober reading. It’s clear the company need not have been pushed into administration and, now, receivership. The report reveals that Ten only had $129 million of secured creditors, which in a company with over $600 million a year in revenue seems to be too little to push the company into the corporate knackery.

Accumulated losses of $1.3 billion were declared. Unsecured creditors — mostly production/program suppliers, employees and everyday suppliers — are owed tens of millions of dollars. Endemol Shine Australia, which is 50%-owned by 21st Century Fox, claims to be owed $12.4 million for programs like MasterChef, Survivor, Offspring and Shark Tank. Working Dog Productions, which makes quiz show Have You Been Paying Attention?, claims to be owed $4.9 million, while the creator of Neighbours, Fremantle Media, says it is owed $3.1 million.

If Ten can’t continue paying its share of Neighbours‘ costs then the future of the program will be in doubt because of growing resistance in the UK from Channel 5, where it also appears. Channel 5’s owners, US group Viacom, have struck a deal with Fremantle Media to keep it going for another four years, but that was done in April, well before Ten’s problems. If Fremantle can’t recoup the money owed and can’t get assurances of future payments, then the program’s future will be in real doubt, despite the UK agreement. Ten is not paying the full costs for its rights to the program here in Australia.

ITV Australia is owed $3.5 million for producing I’m a Celebrity … Get Me Out of Here! for Ten. That program finished three months ago and the fact that it is still owed millions confirms reports that Ten had forced its program suppliers to finance much of their productions for themselves while Ten made periodic payment for the programs well after they had finished on TV.

The Fairfax report says Cricket Australia is owed $21.6 million, presumably for the next Big Bash season this summer (which will be the last under this current contract). The biggest claim is from CBS in the US, which claims it is owed more than $840 million under a contract to supply programming for Ten and its digital channels. The Commonwealth Bank claims it is owed $98 million under the $200 million revolving credit with the bank that was due to expire on December 23, 2017. Bruce Gordon, Lachlan Murdoch and James Packer have claimed $11 million each in guarantor fees for that loan. The trio has allowed Ten to draw down another $30 million until August 31. — Glenn Dyer

ABC cuts religion editor in unholy row. The ABC has cut its religion editor as part of changes to Radio National. Editor Jane Jeffes has been made redundant as part of managing director Michelle Guthrie’s plan to flatten the management structure of the public broadcaster. The Australian foreshadowed the changes last week, running with outrage from religious leaders over having someone in charge of religious coverage who was not a specialist. This morning, recently retired media columnist for The Australian Mark Day has opined in an extensive piece in today’s Inquirer that the “unholy row” might be destined to continue for some time, despite the ABC’s Judith Whelan’s assurances that the cuts are to a single management position, not any programs. Day, of course, knows his stuff when it comes to religion. The former editor of Melbourne’s Truth presided over a racy agony aunt column called Health Balm, which then-editor Stanley Cecil (Sol) Chandler reportedly once told a sub, “I don’t care what the letters say, but your answers must sound like an Archbishop”.

Newspaper’s picture balls-up. An Irish newspaper has apologised after using a picture of rapper Stormzy wearing a soccer jersey on its back page to illustrate a story about football player Rumelu Lukaku signing with Manchester United. 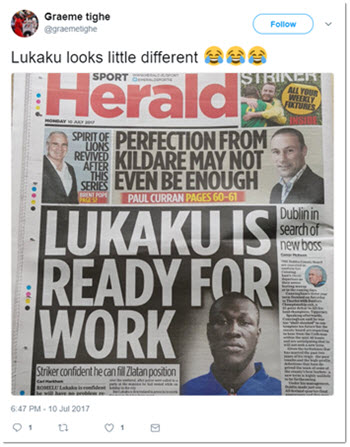 The Herald has apologised for the error in a note from the editor, saying they got it “badly wrong”. “To be honest, we are totally embarrassed and want to say sorry to all involved and our readers for the error. We will keep our eye on the ball in future,” editor Alan Steenson wrote.

Stormzy was understandably upset by the mistake, tweeting that he didn’t find it funny. 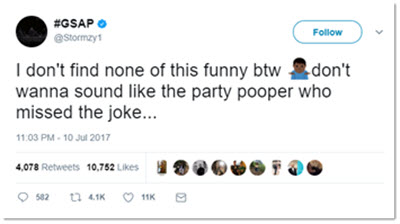 Are bikes ‘Melbourne’s new yellow peril’? Probably not. You can only imagine the subeditor at The Age responsible for this headline, which was also tweeted, yesterday had heard the phrase “yellow peril” without knowing what it usually refers to. Why else would such an old-fashioned racist phrase be used to describe the Singaporean bicycles popping up around Melbourne as part of a new bike-sharing scheme? The story remains, but the headline has now been updated to something less racist. 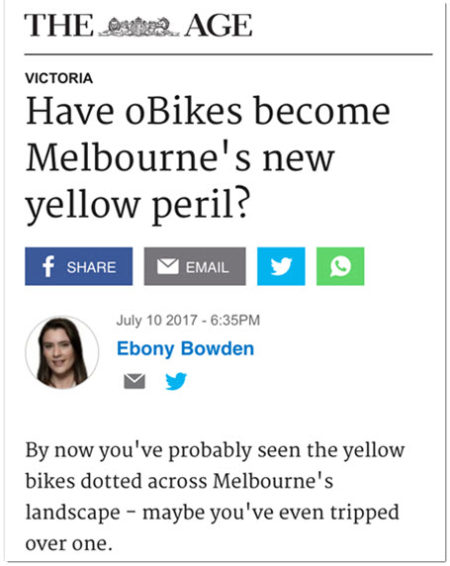 Another Murdoch tech favourite fails. Not even an endorsement from fanboy Rupert Murdoch could save Jawbone from becoming another failed hot tech wannabe. Back in 2013 Rupe was a proud wearer of the device, as he boasted at the start of a speech to the Lowy Institute in Sydney.

“In this country, I have a reputation as a man who occasionally likes to jawbone. In fact, I now wear a Jawbone. This is a bracelet that keeps track of how I sleep, move and eat — transmitting that information to the cloud. It allows me to track and maintain my health much better. It allows my family and I to know more about one another’s health too, which means it encourages more personal and social responsibility instead of just running to the doctor when we don’t feel well.”

Pity that consumers were not listening to Rupe (who was in full strut after separating his empire into two companies, News Corp and 21st Century Fox on July 1). Jawbone was overtaken by Fitbit and a cluster of me-too devices, and it is now in the process of being buried. The News Corp/21st Century Fox co-chair has again showed he has the kiss of death when it comes to all things technology. He was an enthusiastic buyer of MySpace in 2005 for US$580 million — it was sold for US$35 million back to several of its founders and is now buried inside the stumbling Time Inc. And remember Rupe was also a booster of the News Corp tablet paper, The Daily Planet, which lasted just over a year and cost more than US$30 million. And then there was its digital education business that became a company called Amplify. It is no longer a News Corp business, having been sold back to some of the founders. The cost to News, a US$371 million write-down and millions in other costs and losses.

Back in September 2014, Jawbone was valued at US$3.2 billion, but by December 2015 it was worth 69% less, and by the next year its value was down to US$1.5 billion and by last week it was dead. Value destruction, now that is something Rupe knows a lot about. — Glenn Dyer

Glenn Dyer’s TV ratings. Nine Ninja’d its way to the top for a second night in a row, and will be there again tonight and tomorrow night (with the third State of Origin Game). Seven executives and the board might be obsessed with the Amber Harrison court case in Sydney, but in the real battle ground, Nine has the ascendancy and will continue to dominate while Australian Ninja Warrior remains on air — which will then pass the baton to the latest series of The Block. After boasting of winning the first 25 weeks of the 2017 ratings battle, Seven might have to put up with second place for quite a while. Seven will have a miserable tonight with the weak knock off in Behave Yourself at 7.30pm, followed by the appalling (Last Resort appalling) Yummy Mummies at 8.30pm.

I’m sure it’s just some inappropriate spell-check but the Truth’s “reader problems” column was called Heart Balm, not Health Balm.

I did wonder about that – I was only a kid in the 50s but knew there was nothing whatsoever healthy in the Truth.

“Are bikes ‘Melbourne’s new yellow peril’? Probably not.”
Does the writer of this article even come from Melbourne? Probably not.
https://en.wikipedia.org/wiki/Vault_(sculpture)

thanks for saving me the trouble!

The “Yellow Peril” was a famous nickname for an “abstract, minimalist” sculpture that was famously installed and then removed in Melbourne City in 1980. Crikey, seriously. Have you got no cultural memory in your sub-editing pool? Or do articles just get published without any scrutiny? Yesterday’s issue had many Grauniad worthy howlers. Today you’re accusing fellow journal of unconsciously using racial slurs because of a lack of research. Pot, kettle. Lift your game.

I am not religious, but I used to love listening to John Cleary on Sunday nights on ABC radio. That programme got scrapped for no apparent or explained reason, hard to believe any assurances now given about any others not being scrapped.

Those of us not familiar with the cabbage patch state might not have known about the sculpture but as an example of the danger of cliche & common usage being dployed without consciousness of its origins, it’s hard to beat the current pearl clutching in the UK over a tory using the phrase “nigger in the woodpile”.
What next, will “something nasty in the woodshed” (Cold Comfort Farm) being deemed to be child abuse?