How to act presidential. There are some professions and areas of business where accusations of sexism would hinder one’s career aspirations and upward mobility. The Young Liberal movement is not one of those areas. Ms Tips hears that Xavier Boffa, the president of the Melbourne University Liberal Club who told a woman she was not invited to a club event because it would make some of the men uncomfortable, has now been elected president of the Australian Liberal Students Federation. The ALSF is the national body that links university Liberal clubs and counts many prominent MPs among its former members. In April The Age reported one of the women in the Melbourne University Liberal Club said Boffa had sent her a text saying he hadn’t invited her to an event because “a couple of the guys were a bit uncomfortable about inviting a chick”. Boffa confirmed to Fairfax that he had sent the message. Then vice-president of the ALSF Blake Young said “the sort of rubbish we’ve heard from Xavier’s comment is the sort of thing we’ve tried to expunge”. But, as is becoming increasingly obvious, this kind of thing isn’t expunged, and it is no barrier to gaining seniority.

G20 At Bernie’s a hit. While the government and journalists scramble to pretend the G20 meeting actually achieved something, we noted with pleasure that we’re continuing our Weekend At Bernie’s-style effort to claim Australia’s most famous contribution to the annual talkfest is still alive. Back in 2014, when Tony Abbott hosted the G20 in Brisbane (that’s the meeting where Abbott’s promise to “shirtfront” Vladimir Putin never materialised, and people like Barack Obama enraged Abbott by insisting on saying climate change was real), the government boasted about our achievement of obtaining a G20 commitment to 2% growth. This always struck us as reminiscent of governments that, having run out of ideas, go to an election on a campaign slogan like “Go for growth”, as if they normally “go for recession” but had changed tack. The 2% commitment was dead in the water before the leaders had even left Brisbane, but Mathias Cormann is on the waterskis desperately trying to pretend it’s alive, reporting over the weekend that the G20 had achieved a mighty 1.2% growth. Better yet, it was so successful, the G20 has “enthusiastically and unanimously endorsed” a suggestion by Cormann that another growth target be set at next year’s meeting. Some advice for our Finance Minister: Weekend At Bernie’s 2 was a dud.

Ready for his close-up? Prime Minister Malcolm Turnbull has been having a great time posting photos of himself and all his international besties at the G20 forum over the weekend, but we couldn’t help but notice a bit of a pattern. While there’s a photo of him taking a selfie with Canadian PM Justin Trudeau, some happy snaps of Turnbull, his wife, Lucy, and French President Emmanuel Macron and his wife, there’s no such selfie with US President Donald Trump. We know after that phone call, that Turnbull and Trump aren’t great mates, but has the passive aggression been turned up a notch between the two leaders? Whenever Trump features in Turnbull’s pics on social media (generally taken by his official photographer, Sahlan Hayes), he is generally not looking his best. In one photo on Instagram, Trump seems to be in the middle of saying something, while in another posted to Twitter he is also caught mid-sentence. It’s the kind of power play teenage girls would make — is it too much to suspect it of the PM’s social media team? 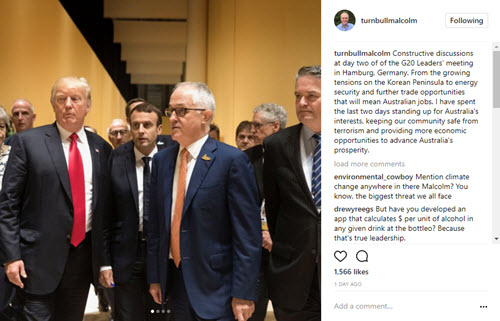 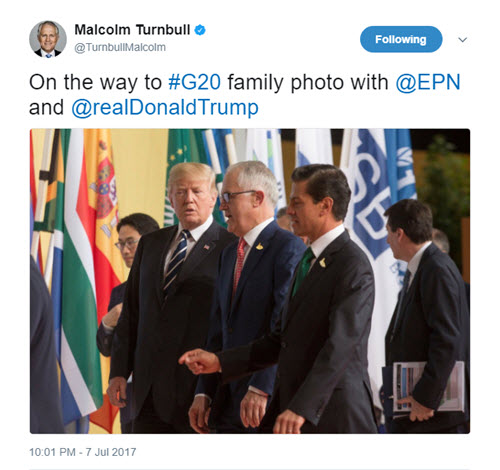 No ‘coal bias’ at your ABC. Won’t somebody please think of the coal? That’s what right-wing backbench Senator Eric Abetz wants to know. In Senate estimates in May, Abetz asked why the ABC had reported “with glee” about the decline in coal prices, but not about the rise in coal prices. In response last week, the ABC stated that a 2016 review found that it is “the ABC’s responsibility to reflect the world as it is” and that coal mining and commodities had been in a downturn.

The ABC then pointed to several news articles since where the public broadcaster had — contrary to Abetz’s claims — reported on the rebound in coal prices. There are more links here, here, here and even here if Abetz is lost.

Retire back into your Tassie hole Abetz. You’re yesterday’s man and no one is listening, regardless of how ‘en pointe’ you think you are.

Most of us really don’t want him down here thank you Barbara. Poor old Erica, he’s so out of touch, he can only get a job with Malcolm and The Mad Monk.

Poor beneficent and omnipotent Erica (“abortions can precipitate breast cancer” Aug; 07 ’14) – so misunderstood – he’s only in government to over look the interests of us serfs. If only we’d stop meddling in that process, in return for that magnanmity.