We will all know less about the world and hear only more Western-centric news if Al Jazeera is forced to close, writes journalist and media-watcher Christopher Warren.

Al Jazeera has always been controversial. But its closure would cost us all nuance and perspective in global news.

First, some quick back story. At the beginning of June, Saudi Arabia, Egypt, Bahrain and the United Arab Emirates all cut diplomatic ties with Qatar. The Saudi-led group claimed Qatar was supporting terrorists and Islamic extremism. The group then imposed a series of demands on Qatar.

Among the demands made was that Al Jazeera’s satellite network and affiliated stations be shut down. The deadline for this ultimatum passed last week. So far, Qatar has refused. US Secretary of State Rex Tillerson is in the Gulf to attempt to mediate. So the fate of Al Jazeera could be known this week.

In much of the West, Al Jazeera is better known for the news it makes than for the news it produces. Most famously in Australia, it’s known for the 2013 arrest of three of its journalists, Peter Greste, Mohamed Fahmy and Baher Mohamed, in Egypt. The three were wrongly charged with falsifying news and supporting the Muslim Brotherhood, which, following the military coup, had gone from holding the presidency of Egypt to being designated a terrorist organisation.

These arrests went to the heart of the question that has been asked since Al Jazeera began as a regional Arab-language broadcaster in 1996. (Its English-language service was launched in 2005): is it a state-run broadcaster, reflecting the politics and views of the Emir of Qatar (and particularly his support of Islamist movements)? Or is it an autonomous public broadcaster committed to principles of editorial independence?

The truth seems to be that the Arab-language service lies on one side of the line, and the English-language service on the other, but both are fluid. And over 20 years, the internal pressures from its own journalists has steadily pushed the network towards greater independence.

The tension between the two poles becomes intense when societies are in conflict. In 2013, about 20 members of the Cairo bureau resigned because of concerns that the network was supporting the Muslim Brotherhood. After Mohamed Fahmy was freed from prison, he sued Al Jazeera for placing him in danger by misleading him over its political role.

[Not to be hyperbolic, but Qatar-Saudi Arabia dispute could boil over into World War III]

On the other hand, alone of the global media voices, Al Jazeera provides independent reporting, covering politics, finance and social movements — even whole countries — that otherwise gets lost in the funneling of our international news through London and New York.

So far, the Qatari government has rejected the demands from the Saudi-led coalition to close Al Jazeera. But the blockade is already having an effect. The Arab nations have blocked its signal and shut its offices. According to the International Federation of Journalists, about 55 Al Jazeera journalists from Gulf countries that are part of the Qatar boycott have been ordered by their governments to return home or risk losing their citizenship. Saudi citizens face fines of A$3700 for watching the broadcaster.

This is not just another story about a media crackdown in a faraway country. Lose Al Jazeera and we’ll lose our own access to news and information. Al Jazeera is the most significant global news entity based outside central London, New York or Washington. The voices coming from these global centres — like The New York Times, The Guardian or The Wall Street Journal — are driving the globalised end of the 21st century news ecosystem.

But they give a very American and British perspective. Right now, it’s Trump and Brexit, Brexit and Trump 24/7. News from outside the centre is only newsworthy when it’s told from the centre’s perspective or when it directly affects the centre. What do we know about this week’s G20? Trump. Oh, and Ivanka.

This reflects a long-term structuring of global news flows through London and New York as a result of the headquartering of wire agencies and the homes of organisations prepared to fund a foreign focus. What’s changed is that the worldwide decline in journalism numbers has tightened the bonds of these chains. Out of Australia, for example, there are fewer foreign correspondents reporting the world’s news for Australians.

Take North Korea. There’s plenty of reporting available about this Trump tweet or that warning from US officials. We even get a pretty good sense about the internal US debates about what to do next. But there’s little reporting about this very regional story from the perspective of, say, China, South Korea, Japan or, to be honest, North Korea itself.

We don’t have to agree with everything Al Jazeera has said or done as it has fought its way up to be a global news source. And, yes, there are steps it should take to entrench greater independence.

But if the Saudi-led coalition is successful in forcing its closure, we will all know less about the world and hear more of what we do hear through the same narrow perspectives. 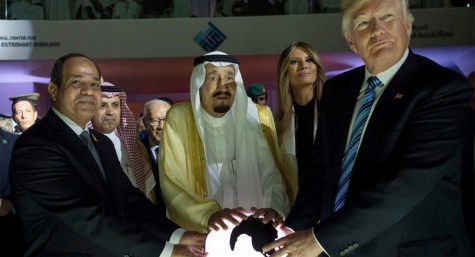 Follow Friday: @courtneyr and @pressfreedom, fighting for Greste and others

I’m a great fan of Al Jazeera and it will be a shame if it goes. It’s only them and the ABC that I rely on for serious TV news (& PBS for US issues).

It’s worth viewing Deutsche Welle English News (Berlin) & France 24 English News (Paris) on SBS in the early mornings – I record them in order to sleep in then watch the replay instead of the (mostly) fatuous local breakfast offerings.

It’s important to get perspective & balance from overseas news sources such as these & Al Jazeera.

Whatever has happened to Peter Greste these days? Why isn’t he out there supporting Al Jazeera anymore?

I heard him on radio recently, I forget where. He left Aljazeera, annoyed at them for not supporting him in Egypt.

Al Jazeera was in one of the first buildings bombed and all occupants killed when US, Britain and Australia invaded Iraq. Hands up those who believe that was an accident.

I can’t understand why Limited News isn’t crusading for the ‘freedom of this press’ ….?

I have a great deal of trouble getting my head around this. 🙂