Is Bret Stephens an appropriate person to deliver the inaugural Mark Colvin Lecture?

Today in Media Files, controversy over the Lowy Institute’s speaker for its newly named lecture in memory of broadcaster Mark Colvin, and The Advertiser breached Australian Press Council guidelines with its description of a poll.

Colvin lecture controversy. A Lowy Institute decision to call in a controversial self-described climate “agnostic” as its inaugural speaker for its Mark Colvin Lecture has caused a stir. The Lowy Institute Media award dinner lecture has been named after the late ABC foreign correspondent and PM presenter, who died in May after suffering from a chronic illness contracted while reporting on the Rwandan genocide. The Lowy Institute announced that the lecture this year would be delivered by conservative New York Times columnist Bret Stephens, who writes on foreign affairs but has called climate change one of liberalism’s “imaginary enemies“.

Colvin’s friend and journalist Jess Hill is among the journalists and friends to criticise the move on Twitter, calling Stephens an “intellectual gnat“: 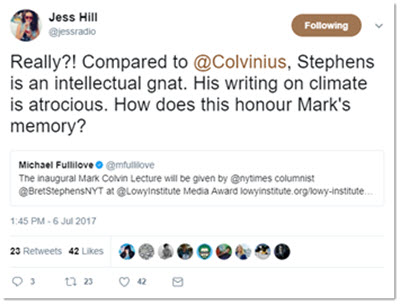 Another of Colvin’s friends, 7.30 host Leigh Sales, also tweeted about the announcement, saying she thought he’d be “chuffed” by the recognition, and later retweeting one of Colvin’s tweets linking to a Stephens column. 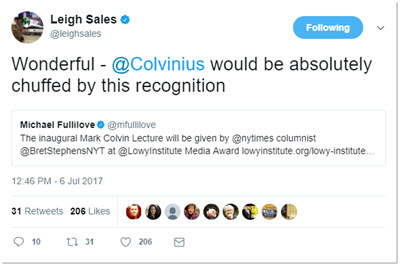 Stephens, a Pulitzer Prize winner, caused controversy when he was hired by The New York Times for his views on climate change.

The Advertiser called out for misleading poll headline. The Advertiser has breached the Australian Press Council standards for publishing a headline in March over an opinion poll stating that South Australians blamed Premier Jay Weatherill for the state’s power crisis. The council found that the front-page headline “Blowing his fuse: Sparks fly as Premier ambushes minister but exclusive polls reveal SA blames Jay for power crisis” suggested the poll was representative of the whole state. However, the Galaxy poll commissioned by the paper, which was printed inside the paper, only surveyed three electorates. In response to a complaint about the story, The Advertiser offered to run a letter to the editor, rather than a correction. The council found that the description of the poll did not sufficiently outweigh how misleading the headline was, so the paper had breached two guidelines: that it should take reasonable steps to make sure its news stories were accurate not misleading, and that it should publish a correction if it had printed information that was significantly inaccurate or misleading. 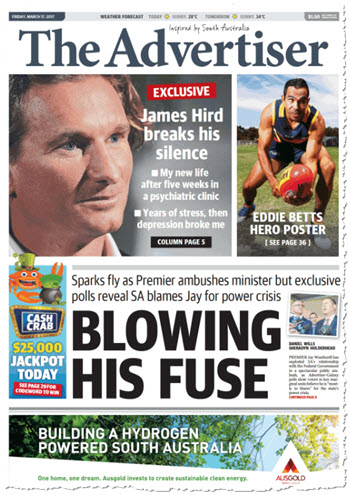 Shopping channels to merge, without free set of steak knives. Is nothing sacred? Home shopping is going backwards, following other legacy media. Old-style retailing is a species endangered by the rise of Amazon and other online operators. Home shopping is no different — it is dominated by QVC and the Home Shopping Network (HSN), which are in turn dominated by John Malone and his Liberty group of companies (centred around Liberty Media inside the US and Liberty Global outside). Now HSN and QVC have hit a rough patch and some tidying up is needed by the Liberty group.

After several years of slowing or static sales, Liberty Interactive (which owns QVC), is bidding for the 61.8% of HSN that it doesn’t own in an all-paper bid worth about US$2.1 billion. The offer values HSN shares at US$40.36, representing a 29% premium to the company’s closing price on Wednesday — a sign the Malone camp wants the deal done. HSN shares jumped more than 26% after the deal was done. That cut the loss in value for the past year to 22.7% — before the offer the shares had fallen more than 34% since July 2016.

While TV-based home shopping doesn’t have the bricks-and-mortar complications of older forms of retailing (such as department stores), it is slap-bang in the way of Amazon and others online. This deal isn’t about expansion — it’s defensive and aimed at cutting costs.

QVC and HSN pioneered televised home shopping in the US in the 1980s (and their channels are cloned or local versions are broadcast here on pay TV and on the digital channels of Seven, Nine and Ten). Now, like department stores, clothing chains, shoe groups and other retailers, these two TV networks are being forced into each other’s arms by Malone’s fears they will be left behind by the continuing rapid growth of Amazon and others.

In 2016, QVC’s revenue was flat at US$8.7 billion while HSN’s revenue dropped 3% cent to $3.5 billion. But wait, there’s more! There’s yet another offer from John Malone on top of the bid.

After the deal completes towards the end of the year, Liberty Interactive says it will spin off its cable-TV operations into an independent company that will be called QVC Group. That unit will include Zulily, a flash-sale site QVC purchased in 2015 for US$2.4 billion, as well as the Cornerstone unit of HSN, which includes brands such as Ballard Designs, Frontgate and Grandin Road. Liberty Interactive claims the deal will make the two businesses more competitive, create “meaningful synergies” through cost reductions and help to optimise programming across five different US TV networks. In other words, costs have to be slashed by combining the two companies, sacking staff, suppliers and and others — just like what the likes of Macy’s, JC Penny, Sears, The Gap, Ralph Lauren and others have been forced to do. — Glenn Dyer

Karl threatens to leave Today every year. Today host Karl Stefanovic has apparently been threatening to walk for years, according to his former colleague Ben Fordham. Fordham, who stepped down in 2014 as the sports presenter on Nine’s breakfast program, told podcast You’ve Gotta Start Somewhere that Stefanovic had tried to get him to stay, saying he only had one more year of the show in him and Fordham could take his place. “He said, ‘mate, I’ll just do one more year and then you’ll take over as host’ … He’s been claiming for about seven years, ‘This is my last year, this is my last year’,” Fordham said. Fordham still fills in for Stefanovic on occasion, and hosts a 2GB program.

Glenn Dyer’s TV ratings. MasterChef was the most watched non-news program, with 1.25 million people nationally — a good result for Ten — on a generally weak night. Not so good was the bombing of Common Sense, the Gogglebox Australia derivative which flopped badly on Foxtel on Wednesday and again on Ten last night. Common Sense managed just 647,000 viewers (including 463,000 in the metros — it’s a program aimed at metro viewers really, so it didn’t click). It followed MasterChef at 8.40pm and was beaten by Janet King on the ABC which wrapped up last night with 787,000 national viewers. That was also more than watched 7.30 an hour earlier (733,000, which used to be a moderately tolerable figure for the program in metro markets).

Seven claimed more viewers in total people, the main channels were almost a draw and SBS had a surge in viewers because of another stage of the Tour de France, which averaged 266,000 from 8.30pm to well past 1am Friday. Everything else was forgettable.

Leigh Sales, Mark Colvin had far more brains than you give him credit for. He knew a fraudster and climate denialist when he saw one. Don’t try to pretend he would be happy to be associated with Bret Stephens.

As for the Advertiser, it’s always been a complete load of Murderoch bollocks.

With her two-speed approach to politics, Sales is little more than a conservative groupie.

LOL I’d really love to hear the bollocking Colvin would deliver to Sales over that particular tweet.
The very best you could say about Bret Stephens delivering a lecture in honour of Mark Colvin…. An epic piece of trolling.

Egad, I’m reeling from the astonishing news that ‘The Advertiser’ published a misleading headline. History has been made! Read all about it!

But why would the Australian Press Council isolate this single headline when The ‘Tiser offers a generous smorgasbord of inaccuracies all year round?

The Advertiser may have been called out for a misleading headline but is unlikely to stop what has become a chronic practice. If you take the publication of the finding it as well hidden with a very drab headline, a repeat of what had happened and it took until over half way into the story to find the negative findings which amounted to two small paras. The final paragraph extolled the lack of a finding for another section and quoted fair behaviour in the finding. So anyone who only read the beginning and the end of the story would have missed the negative findings and there was no hint of an apology.

I always thought that ‘Advertiser headline’ and ‘Misleading’ were synonymous.
The Advertiser is a complete joke.