Next stop on the Sniping and Undermining Tour ... what happened to foreign donations? ... the Green Army is not dead yet ...

Dinosaurs for dinner. In case there was any doubt that former PM Tony Abbott was just getting started on the Sniping and Undermining Tour (Winter 2017), now it can be revealed that he is the star attraction at a fundraiser dinner for fellow conservative Kevin Andrews early next month. An invitation has been sent to members of the Menzies 200 Club, for a dinner on August 3 — the last Thursday before Parliament returns from the winter break on August 8. While Andrews has not been as mouthy as some of his other colleagues on the outer like Eric Abetz, he is a staunch Abbott loyalist and senior delcon. Andrews’ seat of Menzies is right next door to that of Michael Sukkar’s Deakin electorate, where Abbott was recorded telling a branch meeting: “Just at this moment, let me tell you, we’re at a bit of a low ebb.” What analysis of Malcolm Turnbull’s leadership will he-who-must-not-be-named (Turnbull has answered questions relating to Abbott comments by referring to him as “that gentleman”) come up with then? And how long will it take for a recording to leak? Maybe he should just start inviting journalists to cut out the middle men (Crikey volunteers as tribute, so feel free to shoot as an invitation, fellas).

Whatever happened to foreign donations? Notice how — inevitably — the issue of foreign influence via political donations has died down again? Until the next scandal, of course. And there will be another scandal. The legislation to outlaw foreign donations is still being drafted, because it’s no simple matter to define what a foreign donation is, and because the government is keen to bring third-party groups like GetUp within the ambit of the ban. But talk of an inquiry, possibly by the Joint Committee on Intelligence and Security, into foreign attempts to influence Australian political parties has vanished, possibly because of the potential for mutual embarrassment. Nor would such an inquiry have been confined to Chinese influence. There’s a history of efforts by Israeli diplomats to inappropriately involve themselves in the policy and internal processes of the Labor Party, and some in Labor who are happy to collaborate with them. Then there’s the ongoing tendency of politicians on both sides, not to mention senior public servants, to have very close relations with US officials. Any genuine inquiry would see all manner of deeply embarrassing revelations that weren’t confined to the noxious activities of the Butchers of Beijing. No wonder there’s little enthusiasm for it — but the need remains.

Not dead yet. Late last year, Prime Minister Malcolm Turnbull took an axe to one of Tony Abbott’s pet projects, the Green Army. But the army is a long way from defeated.

In a response to a question on notice from Nick Xenophon Team Senator Skye Kakoschke-Moore, the Environment Department said that although the government announced the end of the program last year, there were still 118 Green Army projects yet to commence, which would train around 1180 young Australians. When the program shuts down in June 2018, it will have undertaken 990 projects since the government launched it.

The dystopian future is now. Margaret Atwood’s dystopian novel The Handmaid’s Tale was turned into a television series this year by US streaming giant Hulu, and it will be released locally today by SBS through its On Demand streaming service. To plug the series the broadcaster sent a team of handmaids out into the Sydney streets this morning, taking the train and generally looking a bit creepy. 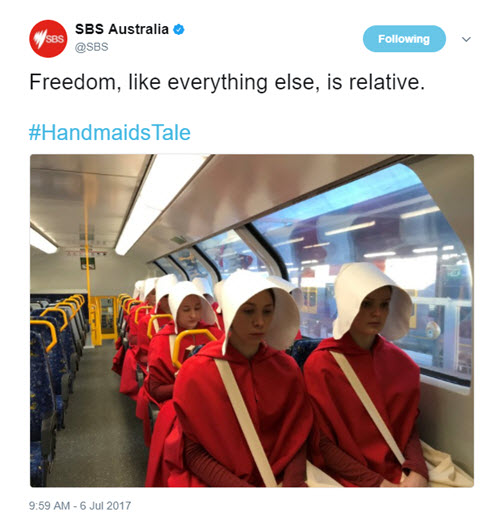 The war of attrition against Abbott’s Green Army

For the sake of accuracy Turnbull must desist from describing Abbott as a ‘gentleman’.

Bring on a Federal ICAC, with all revelations fully disclosed. Funny how none of the pollies seem to support it.

“Foreign donations” :- How do you calculate the monetary value of the positive PR/spin that “Uncle Rupert” Murdoch’s Limited News imparts on their politics, to the benefit of their Limited News Party : and the detriment of those that get in their way?
That Labor and others then have to spend at Limited News (being just a about the only game in town when it comes to hard copy detritus) to buy advertising : to counter their Limited News shower of shite?

Hard to find someone more foreign than mudorc whose interests so inimical to country.
Unless it is the Israelis who sought to inappropriately involve themselves with some in Labor who are happy to collaborate with them – which clearly would not include the Member for Haifa Ports who was on Macquarie this week radio network doing what he always does at the behest of ..umm… who exactly?

… as well as “on Macquarie radio network this week”.

Did you really mean “Crikey volunteers as tribute“?
What, splayed out on an altar for some foam flecked, gore dripping tory to plunge in the knife?
Now, Crikey as a tribune to We, the People, I can applaud.