Seven has apologised for a poll asking its Facebook users whether commentator Yassmin Abdel-Magied should leave the country.

Today in Media Files, Seven has apologised for a poll asking its Facebook users whether commentator Yassmin Abdel-Magied should leave the country, and the Australian Financial Review has canned its letters page today to fit in a two-page ad.

Seven apologises over Abdel-Mageid poll. Yahoo7 has apologised to Yassmin Abdel-Mageid over an online poll asking viewers whether she should leave the country, as she announced she was doing earlier this week. Abdel-Mageid, an ABC presenter, commentator and writer, has been under continued scrutiny by Australian media (and, in particular, The Australian) since she made comments on Q&A at the beginning of the year about Islam being the most feminist religion, and, more recently, over a quickly deleted and apologised-for Facebook post on Anzac Day.

In a statement, Yahoo7 said the online news team had acted “independently of Seven News” in posting the poll on the 7 News Australia Facebook page. “The poll has been removed and an unreserved apology has been issued to Yassmin Abdel-Magied by Yahoo7,” a spokeswoman said in a statement.

Abdel-Mageid responded to the apology with a tweet yesterday, referring to her apology over the Anzac Day post: 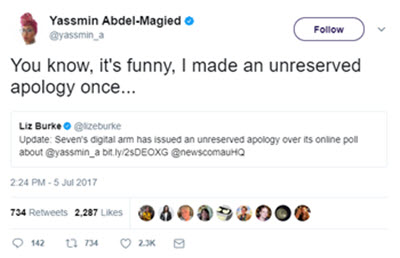 Her plan to leave also received attention from the national broadsheet, earning a front-page pointer in The Australian yesterday, which she responded to on Instagram: 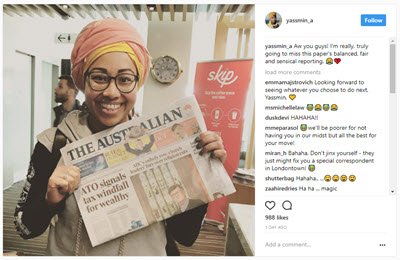 Dear editor. Where were the letters to the editor in this morning’s edition of the Australian Financial Review? Normally in a 48-page paper (it’s the Thursday real estate edition, but down from 56 pages a few months ago), letters to the editor would have been on page 43, but that was filled by the second of a two-page advertiser-sponsored “feature” on global battery demand. 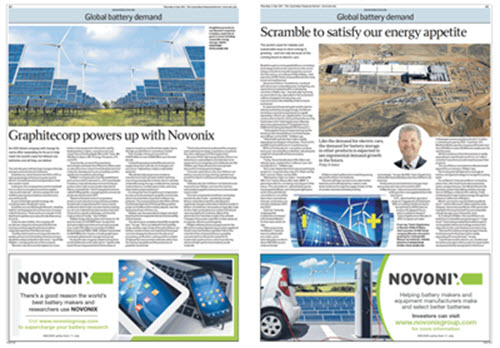 So perhaps the letters have been “stored” for the Friday edition? There were only four letters in Wednesday’s 40-page (advertising-light) edition, which could mean the paper didn’t have any letters worth publishing today and the feature on global battery demand was in fact a godsend. — Glenn Dyer

Byers starts in the role next week. She has previously edited Woman’s Day, New Weekly and TV Week. Her replacement at OK! hasn’t been announced.

Myer edits ad over koala outrage. Retail giant Myer is editing an featuring pop star Katy Perry, whose tour the retailer is sponsoring, after complaints that it encouraged people to let their dogs go after koalas. The outrage stems from a line at the end of the ad addressed to her dog, where Perry says, “Let’s go chase some koalas, Nugget”. A wildlife vet spoke to the Courier-Mail, saying being attacked by dogs was koalas’ biggest threat. Myer issued a statement saying it was removing the reference to koalas from the ad, AdNews reports.

Front page of the day. The NT News is back to two of its old faithfuls for the front page today — animals and sex. 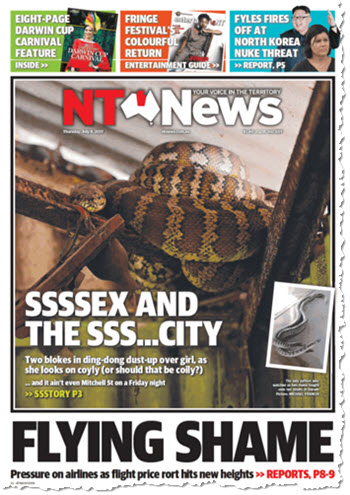 Glenn Dyer’s TV ratings. The big news from last night was that Offspring is losing it. The program had 832,000 national viewers — down from 993,000 a week ago for the returning ep — a drop of 11.6%. But the real concern should be the 18% slide in the metro audience to 594,000 last night from 724,000 a week earlier. Metro viewers are the core audience for Offspring and the faffing Nina. If they don’t come back it will be a very dry winter for Ten. Masterchef had delivered 1.14 million viewers as a lead-in, so more than 27% of that lead in audience didn’t stick around for Nina.

An early morning finish for the Tour de France’s fifth and nastiest stage so far, an impossibly steep mountain top finish. Chris Froome, the defending champ, grabbed his first yellow. That, plus Shaun Micallef’s Mad As Hell (872,000) on the ABC and MasterChef on Ten were the highlights last night on what was a pretty weak night of TV. Seven was especially weak and had a miserable night in the metros especially, with its hour of news from 6pm easily beaten by Nine News.

The AFR has been missing the letters section at least once a week for many months. I assumed that the letters editor works part time……..

What’s happened to the buzzcock that posted that poll? Promoted?

I hope that Katy remembers how DPM Barnarby Rudge dealt with Pistol & Boo and has full documentation and a good, strong lead if she brings Nugget (interesting choice of name, is she a fan of Coombes?).

… led by the fringe right journalists of the Daily Telegraph…