Thirty five years worth of retail turnover data shows that we now shop very differently to the era of Bob Hawke, big hair and shoulder pads.

The Australian Bureau of Statistics has been gathering data on our retail spending habits since April 1982; its May 2017 retail sales figures thus provide 35 years’ worth of what consumers have been doing with their money.

For starters, we’re spending way more, reflecting income growth over more than three decades. We spent a total of $3.5 billion in trend terms in the month of May 1982, which is worth around $12 billion in 2016 dollars. But actual spending in May 2017 was more than double that — $25.9 billion.

But the big change is in how we spend it. The long-term trends can be seen in this graph. 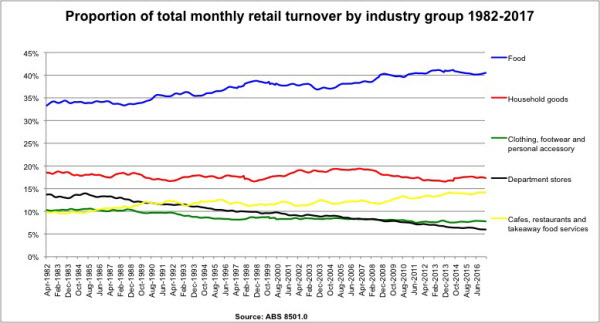 The big winner has been the already dominant food category; we’re directing a greater proportion of our retail spending to feeding ourselves and our families. That’s why food and grocery is one area of retailing where there have been major new entrants like Aldi and CostCo in recent years, eager to tap into what is now a $120 billion-a-year market, and why Amazon will be targeting grocery when it enters the market later this year. What’s interesting about the long-term trend is that it began at the end of the 1980s and wasn’t seriously deflected by the recession of the early 1990s. For whatever reason, we began directing more of our growing incomes to eating, and it’s continued, with the occasional temporary drop, ever since.

And while we’re consuming more of our income at home, we’re also eating out more — something that’s been clear now for several years in both the retail turnover figures and in employment in the hospitality sector (including the number of 457 visas in hospitality that have been issued). This is part of what’s dubbed “the experience economy”, and has happened across the west and even in countries like India in recent years — consumers are preferring to buy “experiences” — fine dining, holidays — rather than yet more consumer goods. So despite the alleged impacts of penalty rates, the proportion of spending in cafes and restaurants has grown steadily since 2009 and is now over 14% of all turnover.

But department stores have recorded a big decline; you have to go back to 2007 for a time when department store turnover was consistently lower in cash terms than in recent months. When Bob Hawke was prime minister, around 14% of turnover went to department stores; it’s currently 6%. Clothing and footwear shops have witnessed a similar, albeit gentler, decline. That industry went into decline in the 1990s (perhaps falling prices from the removal of tariffs offset higher consumption) but the recent, presumably internet-caused decline appears to have halted for now. Household goods have remained relatively consistent but we did seem to go crazy for new TVs and white goods during the first mining boom when the Howard government was shoveling money out the door as quickly as it could. Maybe it was a lot of new fridges to store all that extra food we’ve been buying.

Interesting that in October 2004 until December 2008 was the maximum spend on household goods. Rudd’s cash stimulus for almost 9 million Australians didn’t happen until April 2009. Which proves the handout wasn’t buying foreign made flat screen TVs – which was the LNP’s criticism at the time.

The steady rise in the yellow line suggests that the smashed avocado/cardonnay latte economy is doing well.

Probably why we’re spending more on food – it costs more.

But my recent experience with Amazon shows why it is going to absolutely smash local retail: last Wednesday, I ordered a few pairs of shoes for my wife from Amazon in the US. They arrived at our front door on Tuesday morning. That was with the “free delivery” option as well, not “express”.

You struggle to get that sort of delivery time from local vendors shipping from their local depots. The last time I bought something from Target’s eBay store it took 9 days just to make it to a local store of me to pickup.

Food is one of the few levers capitalists had to make us into wage slaves, it is no surprise that it does not get cheap when everything else is. “There’s no such thing as a free lunch”, they say, because someone had to produce it, in a heavily automated factory farm. We can barely sustain profitability on small food producers because their products basically worthless, but still pay high prices for the leeches in the retail sector.

I swear, we could have star trek replicators and people would still have the stones to charge us for food. The government will give us UBI in the end just to keep bullshit wage labour afloat.