Bill Shorten finally found a Daily Tele front page he likes. And other media tidbits of the day.

Today in Media Files, The Daily Telegraph has gone full clairvoyant with its front page throw-forward to 2019 (and Bill Shorten as PM).

Tele goes back to the future. The Daily Telegraph has an especially, shall we say, creative front page today. While it often opts for some choice photoshop-use to illustrate its front page splashes, this morning Sydney’s tabloid has gone a step further, manufacturing a whole story in the future. The Tele has predicted that in July 2019, current Opposition Leader Bill Shorten will be Prime Minister, Scott Morrison will be opposition leader and Anthony Albanese will be governor-general. 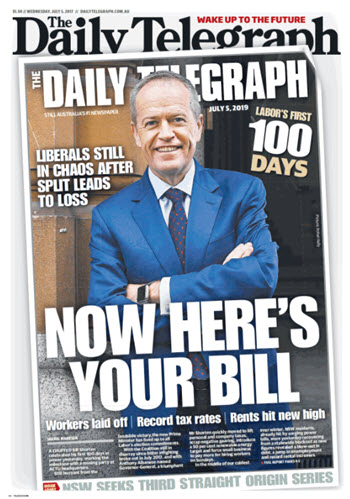 National political editor Sharri Markson is still expecting to be writing about politics, and in the fake news story reports on all the disasters to come our way: NSW’s coldest-ever winter, a statewide blackout, a debt blowout, higher unemployment and rent increases.

The Tele has credited Shorten with legalising same-sex marriage, but reckons higher taxes for businesses will push up unemployment, while personal tax for top earners will be 49.5%.

In an editorial explaining the stunt, the paper says its “crystal ball isn’t exactly uninformed. Rather, it is telling us no more than Shorten has told us already”.

Controversially, the front page of 2019 has a pointer suggesting NSW will be going for its third-straight State of Origin win, meaning they are expecting the Blues to have a win in Brisbane next week.

The new front page also has a thoroughly futuristic masthead — in all capitals — although the tagline has changed. Rather than “we’re for Sydney”, it’s gone for “Still Australia’s #1 newspaper”.

How snapper sprung Chris Christie. A photojournalist who caught New Jersey Governor Chris Christie out enjoying a beach closed to the public during a government shutdown says his paper hired the plane to show how empty the beach was on what would usually be a busy summer’s holiday weekend. The idea was to compare the empty beach to how packed it usually would be. Photographer Andy Mills wrote a piece for his New Jersey paper, the Star-Ledger, about the gotcha:

“Originally, NJ Advance Media had booked a plane for the Fourth of July. The plan was to fly along the Jersey Shore on the holiday and shoot the crowded beaches, juxtaposed with the empty stretches of sand that were off-limits because of the government shutdown, if it were still in effect.

Breathtaking — but exasperating — photos for our readers and New Jersey taxpayers.

But when Sunday’s weather looked good, and the governor’s schedule was open except for an afternoon press briefing in Trenton, I wondered, ‘What are the chances …?’.”

And the hunch paid off — the pilot flew by twice, and Mills got the shots of Christie relaxing on the beach he’d shut down after a budget stand-off. They set off a political storm as journalists caught the Governor out saying he hadn’t had any sun. A spokeswoman clarified this after seeing the pictures by saying he was “wearing a baseball cap”.

News Corp’s correction trifecta. Sky News has completed a trifecta of abject apologies for News Corp outlets in the past week or so. Sky posted an apology to Australian rugby player Peter Kimlin this week after running a story that said he’d been charged with the rape of a 21-year-old woman in France. This was incorrect; he hadn’t been arrested or charged in France.

That follows this apology by the Herald Sun yesterday for an Andrew Bolt error who verballed a Victorian detective in trying to score cheap points defending George Pell (his mate), and the apology by The Australian last week (and again on Monday) for its clanger claiming Ten network chair David Gordon had offloaded his shares in the company. — Glenn Dyer

Guy Rundle’s Insiders recap. So to Insiders, the recap, the great Pell/Abbott/Greens stoush, and the hahaha random rostering of David Marr and Gerard Henderson to sit on the white couch. Who won? No one, of course, except the segment jockey who got to put together the Greens’ stoush montage to Fleetwood Mac’s Rhiannon. Just hope that Senator Lionel Ritchie Slipknot never gets into trouble, there’s going to be some tough choices. Senator Lee Rhiannon acquitted herself well in the main interview; sadly David and Gerard are now starting to play up to their own image. They have become their own muppet version of each other; in future they can phone it in, and the show can play the audio over Bert and Ernie clips.

Gollum for some reason, in trying to rally in favour of Tony Abbott’s IPA speech, appears to have decided that he can portray everyone in the meeja except himself as some sort of wealthy toff: “well it may not be a lot of money to you David, but I spend a lot of time on the South Coast …”. This is a bizarre strategy, not only because who the hell thinks Marr is particularly wealthy, and Gollum is a man who has spent 30 years sucking up to the rich and powerful through his damp basement Sydney Institute, but also because “spend a lot of time on the South Coast” is code for getting out of the city for a few days’ rest, from sucking up to the rich and powerful. Yep, I’m sure they regard you as one of the people, Gollum, you stooped, walking Josef Albers middle period. Gollum really believes this, one suspects, that he speaks on behalf of the dismissed, blindsided, wounded; he is nothing if not in critical condition.

Sadly, though, it was Marr who scored the worst own goal in characteristic fashion, when he caricatured Abbott’s position (in the IPA speech) on removing subsidies from renewables and wind farms as involving the banning of all renewables, with Marr going into some ’70s law revue imitation of “wind farm inspectors”: “come on sir, we know yewve got a windmill on your property ohh arr ohh arrh”. David, tosh and piffle. Abbott’s position is against state subsidies; there’s no suggestion that he wants to ban wind farms for godssake. That matters, because at this stage we’re still arguing that state subsidies for renewables are A Good Thing, and help us get to the tipping point where renewables crowd out other options. How did Marr get this so wrong? For the same reason he usually does. He doesn’t take the other side’s arguments seriously, and refute them. He didn’t even assess Abbott’s point as an economic argument; he simply slotted it into a view of Abbott as a statist authoritarian. It’s the perpetual Whitlamite view of politics as a struggle against a repressive state. But in this case we’re arguing for an enabling state, one that makes a positive investment in renewables. I suspect even Marr’s addled and forgiving book festival fan base will see that, on this point, he simply wasn’t getting it. You can’t busk this stuff David, it’s more important than a few kitsch photos on a wall. Still, at least there was politics. Next week it’ll be back to what Insiders, sadly, has become —  three press gallery regulars saying absolutely nothing at all.  — Guy Rundle

Glenn Dyer’s TV Ratings. Yes, Behave Yourself on Seven was a howler — a real average piece of TV — as suggested yesterday. It could only manage 824,000 national viewers which is barely tolerable, with a weak 510,000 in the metros. It is a laboured rip of Have You Been Paying Attention? on Ten, which has had time to settle down and become an attractive option for casual viewers. Masterchef did well for Ten with 1.16 million people nationally and helped push Ten past Nine in the metro main channels. Nine’s 20 to 1 was a wreck — just 724,000 national viewers at 7.30pm. It was squashed by Masterchef and Seven’s House Rules, which was the third most watched program last night with 1.62 million. Nine’s Love Child at 8.30pm struggled as well and was watched by 807,000 nationally. It needs a cuddle from viewers.

Tonight — Shaun Micallef and Mad As Hell welcomes back the Bill Shorten zinger, and Nina is faffy-minded (again) on Offspring. And the Tour de France enters some hills on Stage 5 tonight on SBS. We have had three nights of spills so far and the major ejection of the favoured sprinter and world champion in Peter Sagan after a fall on Stage 4 overnight Tuesday. — Read the rest on the Crikey website