But you know what they say about stones and glass houses — turns out Bernardi has some explaining of his own to do. Last year he spent three months in New York on the taxpayer’s dime, as a parliamentary observer to the United Nations. It’s a bipartisan program, and he was joined by Labor Senator Lisa Singh. But Bernardi claimed $15,000 more for the trip than Singh, declaring $76,637.28 in last week’s release of parliamentary spending. Singh declared that her trip cost $61,901.54 — both were away from September 14 to December 22.

Bernardi didn’t just outspend Singh, he also went way over the budgets allowed for the trip in previous years. In 2015 Barry O’Sullivan and Wayne Swan were Australia’s observers at the UN, they claimed $64,187.69 and $64,189.99 respectively — more than $10,000 less than Bernardi’s trip.

Come back Wayne Swan, all is forgiven. This morning the Parliamentary Budget Office produced its medium-term budget projections, which use current fiscal settings to look out to 2028. The report shows that government spending, as a proportion of GDP, will remain above 25% for the next decade — although that’s the best-case scenario, as the PBO notes that spending restraint has proven “difficult to achieve”. In retrospect, Wayne Swan’s effort to get spending down to just 24% in 2012-13 now looks an increasingly impressive performance, even if he failed to get the budget back to the promised surplus. As we noted at the time, there was a fair amount of accounting trickery in the 2012-13 result, so if we take the average of the period 2010-12 rather than just that one year, Swan’s achievement still looks good. During the three fiscal years 2010-12 government spending averaged 24.5% of GDP — still a long way below where it’s stuck for the next decade. And, the PBO notes, net debt will still be 8% of GDP in 2027-28. Thank goodness Tony Abbott’s fiscal fire brigade arrived in time, eh? 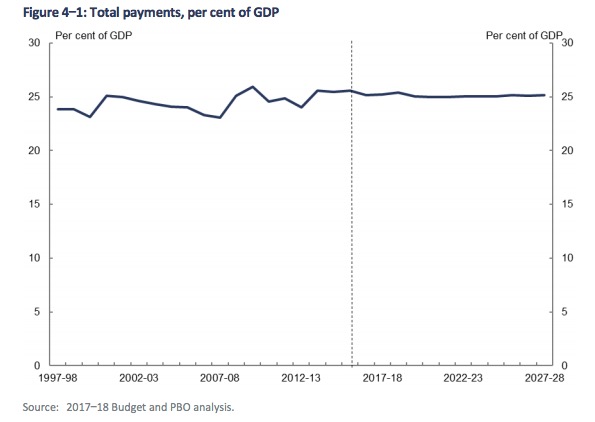 Look who’s all about a fair go. One of the QUT students who achieved a particular type of fame through the conservative campaign against section 18C of the Racial Discrimination Act has popped up again, this time with a byline on the Liberal Party’s confusing PR exercise The Fair Go website, which is meant to be an answer to GetUp or The Labor Herald. The contribution by Calum Thwaites is an article titled “A generation is being robbed of the opportunity to learn critical thinking”. Thwaites, you will recall, was involved in an 18C case over an indigenous-only computer lab at QUT. Thwaites writes:

“We have seen hints of what may lie ahead if Labor gets into government. Not only will section 18C [of the Racial Discrimination Act] stay on the books, but they believe there is scope to reassess extending section 18C to cover religion, or even use it as a springboard to set a standard about speech generally.”

Just so there was no doubt about the political leanings of at least one of the students involved.

Why ever would she want to leave? Like many Australians in their mid-20, Yassmin Abdel-Magied announced on social media this week that she is upping sticks and moving to London. Of course, the ABC presenter, mechanical engineer and writer is still on the radar of The Australian, so the move has been reported by national news outlets. Seven News took it to a new low yesterday though — running a Facebook poll for readers to have their say on whether she should leave or not (for the record, 85% chose “yes it’s a good move for her”).

“Do you support her decision to move to London or do you think she should stay and face her critics?” the poll asked, with 17,700 people participating. Someone at Seven worked out that perhaps this was taking it a bit far, and the poll has now been deleted. 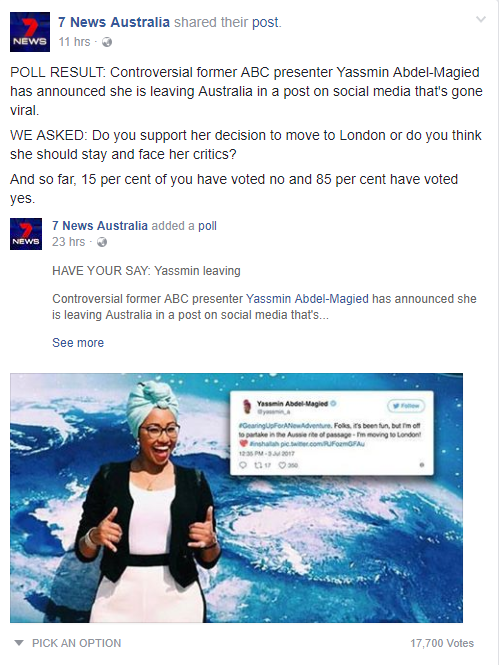 Caw Cory is behaving true to form. Not only does he rip off the taxpayers, he played the Libs for fools by pretending to represent them in the last Senate election.
Who could blame Yassim Abdel-Magied for ditching Oz as fast as she could. Her treatment by the MP was appalling – a bunch of foxhounds baying for blood.

Swan’s achievement is even greater given that he had an exchange rate above parity for much of that time.

The LNP have been dealing with an exchange rate closer to 75 to 80 cents, which makes things that much easier.

Abdel-Magied might find a UK work visa or even entry a bit more difficult than she imagines – perhaps Abbott could give her a reference.
Still, when Blighty finally Brexits it might be eager indeed for an influx of bright, young Commonwealth citizens to replace all of those garlic chompers.

So, after a few months of attacks, what is involved in staying and facing one’s critics? Is one supposed to put their life on hold while anyone is critical of them, and I assume that they swill only be criticised further if they respond to the criticism.

Am I the only one who is sick of Australia’s confected culture wars?