Today in Media Files, The New York Times visits Byron Bay on the Gold Coast, and Woman’s Day has been called out for manufacturing stories (again).

NY Times visits Gold Coast’s Byron Bay. The New York Times‘ Australian outfit just can’t seem to catch a break. If it’s not taking credit for the compensation won by Australia’s Manus Island detainees, it’s getting confused about where, exactly, Byron Bay is. In an article by Times journalist John Eligon reflecting on his time in Australia, he described Byron Bay as a “picturesque Gold Coast town”. The article was corrected after the error was pointed out on social media.

The Times launched in Australia earlier this year as part of an expansion into international markets. The Times‘ management in New York has been facing a revolt from its newsroom as it works on a plan to drastically cut its copy editing staff. Last month it cut its public editor role, saying the function could be partially filled by social media.

Woman’s Day creative beat-up. Woman’s Day apparently hasn’t yet learned (or doesn’t have enough content) to publish true celebrity gossip. Just two weeks after actor Rebel Wilson won a defamation case against the magazine for articles it published saying she’d lied about her age, TV presenter Johanna Griggs has blasted the mag for a story in this week’s edition about her “sixth sense” that helped her detect her husband’s illness.

“For the record: I didn’t have a 6th sense about anything … nor did I save my husband’s life. The doctors and medical staff who looked after him did … Seriously guys — give it a rest, and stop over-dramatising things for us. We are just fine thanks!” she posted on Instagram yesterday. Griggs said in the post that the article was riddled with errors, including that her husband had been rushed to hospital, her children’s ages, and it used a picture old enough to show her late dog Snowy, who she said died last year. 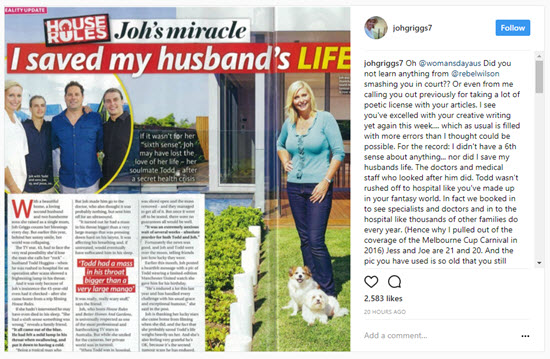 Video of the day. SBS’s The Feed has provided its own take on the showdown between US president Donald Trump and news network CNN (or #FraudNewsCNN, as the president has renamed it). The latest presidential offering was a doctored video of a wrestling match with Trump as a wrestler taking down a person with a CNN logo for a head. SBS speaks to the CNN blockhead. 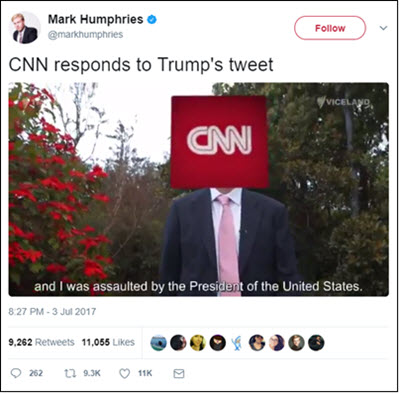 CNN has responded to the spat by issuing a statement suggesting the president should do his job:

“It is a sad day when the President of the United States encourages violence against reporters. Clearly, Sarah Huckabee Sanders lied when she said the President had never done so. Instead of preparing for his overseas trip, his first meeting with Vladimir Putin, ‎dealing with North Korea and working on his health care bill, he is involved in juvenile behavior far below the dignity of his office. We will keep doing our jobs. He should start doing his.”

Fairfax cleared out. With the end of financial year now past, the majority of those who took voluntary redundancy in Fairfax’s most recent round of cost-cutting have now left the company. Adding to the list, The Sydney Morning Herald‘s science editor Marcus Strom will finish at the end of this week. Fellow Herald journalists Jacqui Taffel, Melanie Mahoney, Inga Ting, Leigh Tonkin, Natalie Hambly and Sarah Thomas have left the company. The Age‘s Stathi Paxinos and Linda Pearce have also gone, as has Brisbane Times video producer Scott Beveridge and national digital editor Carlos Monteiro.

Aussie beat-ups other than Manny Pacquaio. With the numbers at Fairfax thinning, the notion of what constitutes news is getting very “creative”. “Ignorant and ugly: Australian social media attitudes to an African disaster” screams the headline of Adam Gartrell’s story in The Sydney Morning Herald, which is mostly a standard summary of the (hideous) South Sudan famine, caused by its civil war. The hook? Two arsehole comments about “breeding Africans” on a social media post. That is the entirety of the “event” that constitutes the basis of the story, then beaten up in the headline to some general survey of Australian social attitudes. What drek. But not, one suspects, Gartrell’s fault. He, after all, is not getting $7.5 million payouts. In other breaking SMH news, cats, in fact, cannot has cheeseburger. — Guy Rundle

Quadrant (again!) prays for the violent death of its ideological enemies. Quadrant online is at it again. A few weeks after publishing a fantasy of panelists and audience members of Q&A being torn apart by a nail bomb, another writer can’t help but slaver over the possibility of the violent death of leftists:

“Leftists are boring because they relate everything to themselves. The old Left of fairness and compassion for the underdog has gone. The new Left is about posing as compassionate at no cost to oneself, preferably towards some ‘victim’ safely at arm’s length — an Aboriginal township-dweller or an ‘asylum seeker’ over on Manus Island. And if an asylum seeker who’s been let in throws bombs in a crowded street the Leftist can live with that too, and make excuses for it, as long as it’s not in some sacred Leftist space like the Wheeler Centre.”

The writer of this masturbatory death fantasy is Christopher Akehurst. It’s part of a 1000+ word tirade on leftists, which ends with the proposition that 1) Hitler was a boring and dull man; 2) nevertheless he dun the Holocaust; and 3) leftists are boring and dull and thus they might do a Holocaust too. This bit of Godwinning is ironic because the writer Akehurst brings to mind here is Hitler, in one of the endless tirades in Mein Kampf and Table Talk about “Jewish Bolsheviks”.

Tough gig, and Coast and Country appears to have gone out of publication. Hard to know which aspect of that he’s bitter about. And who really cares? In the meantime however, is it possible that the one or two sane members of the Quadrant board who remain could gently remind their writers not to fantasise about the violent deaths of leftists, at actual places, where actual people work, when writing diatribes about how incivil leftists are?  — Guy Rundle

Al Jazeera shutdown deadline extended. The bloc of Gulf States demanding Al Jazeera be shut down in a diplomatic dispute with Qatar have given the network another 48 hours. The Qatari-owned TV network was asked to be closed by yesterday as part of the demands set by the Arab nations that have cut ties with Qatar, saying it has been sponsoring terrorism. Al Jazeera has called the demand an assault on press freedom.

Fox Sports president Eric Shanks announced the removal in a memo to staff on Monday: “Everyone at Fox Sports, no matter what role we play, or what business, function or show we contribute to — should act with respect and adhere to professional conduct at all times. These values are nonnegotiable,” Shanks wrote.

Horowitz was removed as a result of the ongoing investigation into sexual harassment claims at Fox by a law firm hired to examine the mess at Fox News Channel. That firm is now working at Fox Sports, indicating there must be a serious ongoing concern at 21st Century Fox about what is happening.

Deadline reported that Horowitz’s lawyer, Glaser Weil’s Patricia Glaser, says that the “way Jamie has been treated by Fox is appalling. At no point in his tenure was there any mention by his superiors or human resources of any misconduct or an inability to adhere to professional conduct. Jamie was hired by Fox to do a job, a job that until today he has performed in an exemplary fashion. Any slanderous accusations to the contrary will be vigorously defended.”

In February Fox Sports scrapped its nightly news show, and hired personalities including Colin Cowherd and Skip Bayless to offer opinions about the day’s developments in a sort of chat show format. That was done to cut costs and try and react to a trend emerging in US cable TV (as we see on Fox News) that the mostly older audiences want opinion rather than facts. — Glenn Dyer

Glenn Dyers TV ratings. Seven’s night thanks to House Rules (1.59 million nationally), Ten did well with MasterChef (1.21 million nationally), and Nine did with True Stories (1.28 million nationally). Seven’s Wanted finished with 1.12 million viewers. That none of those programs managed to top the hour of news from 6 to 7pm on Seven and Nine in metro markets (or Seven’s hour nationally) tells us that viewers were not all that fussed about hanging around and waiting for them. None managed a million or more metro viewers. Four Corners slid (884,000 nationally against the more than 1.3 million for the Aveo expose the week before). As important as last night’s effort was — on Trump’s dealings in Indonesia — given what has come out since, I thought Four Corners management erred in not doing a follow-up last night when one was demanded — and clearly the audience wanted more.

In the regions, Seven News won with 707,000, House Rules was second with 643,000, then Seven News/Today Tonight with 559,000, Home and Away was on 529,000 and Wanted ended its series with 494,000 — that is only 145,000 off its audience in the metros, which tells us it survived because of that solid support from the regionals.  And yesterday morning saw Sunrise “with” Katy Perry win nationally (Sunrise always wins big nationally so no help) and the metros with 299,000 viewers to 294,000 for Today — 5,000 is not much for all that fuss. With school holidays upon us, Seven’s Morning Show and Nine’s Today Extra both saw the usual holidays increases in their audiences, while the ABC’s News Breakfast saw its usual holiday slide. — Read the rest on the Crikey website

NOTE: This article has been updated to correct the name of the SBS program responsible for our video of the day.