Bolt's big blunder ... what a load of bollards ... the world's real cyber criminals ...

Bolt trips up when lecturing everyone else. Well, this is awkward. Yesterday, Australia’s most-read columnist Andrew Bolt railed against the reporting of historical sex abuse charges against Cardinal George Pell, writing “media commentary suggests there’s little chance Cardinal George Pell can get a fair trial”. Bolt quoted a report in The Age and even wrote “shops still carry a savagely biased book by ABC journalist Louise Milligan”. Where he really tripped up, though, was attributing quotes from abuse survivor Andrew Collins to Victoria Police Detective Sergeant Kevin Carson, who hasn’t commented on the case. The Herald Sun carried an apology and correction on page 2 today.

So in a story on the effects of media reporting on a trial, Bolt made a stuff-up that could be read by potential jurors. Good one.

Don’t mention the NSA, they can hear you. At what point, we wonder, will the media wake up to the reality of cybersecurity? Today for Fairfax, the normally excellent Peter Hartcher gives us more than 900 words on the terrors of cyberspace, using that old standby long used by governments of the ungoverned internet in need of cleaning up and civilising (by governments, of course). Other go-to tropes of the “internet needs cleaning up” line also appeared: Russia, China, hackers, organised crime, the West as victim of malicious online actors. Most amazingly, Hartcher went the entire length of the article without mentioning that the latest wave of ransomware attacks (which, incidentally, have hit Russian firms as well as Western firms) originated with the National Security Agency and its tactic of finding vulnerabilities in commonly used software and exploiting them rather than telling the manufacturers about them. So, for the benefit of Hartcher and any other journalists wanting to peddle this stuff, here are some well-established facts:

On cybersecurity, we’re part — probably the biggest part — of the problem, not the solution.

Never mind the bollards. In typical Melbourne fashion, the city has reacted to the installation of temporary bollards in the CBD by decorating the stark concrete blocks. They were installed as an anti-terror initiative by the City of Melbourne, and lord mayor Robert Doyle has assured locals they would only be a temporary measure until a more permanent (and more aesthetically pleasing) solution could be found. In the days since, bollards have become “bollart” with brightly coloured material covers, paint and glitter all being used to spruce up the blocks. Doyle is in favour, telling The Age he’s a “fan of anything that brightens up the city”. 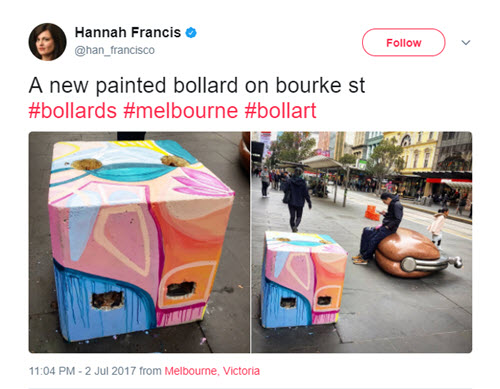 This could be a problem for the council, though, with a caller to 3AW this morning saying the bollards weren’t bought but hired. Will the council be able to return the bollards that have been painted? A council spokesperson told us:

“We would not encourage people to paint the bollards, as they are not owned by the City of Melbourne. However, if any of the bollards are painted, we will be able to remove the paint without incurring significant costs.”

Should we stick to our knitting?

Time to update LinkedIn. The name “Finkel” has entered the Australian political lexicon in the same way that “Gonski” has — we almost forget there is an actual person attached to it instead of a policy. Well, one man hasn’t forgotten. Yesterday, in a speech to the Mathematics Education Research Group of Australasia, Alan Finkel joked about his role in writing the report on Australia’s energy security, saying: “I’m marking a milestone of my own tonight: my first formal event since taking off my hat as Australia’s Chief Electrician, and resuming my hat as Australia’s Chief Scientist.”

It got Ms Tips thinking — perhaps Australia does need chief tradies. Australia’s Chief Plumber could be called in to fix the leaks from our major political parties.

Thanks Perry much. Following our story yesterday on the appointments to the Administrative Appeals Tribunal with Liberal Party affiliations, a tipster got in contact to point out the further Liberal connections of former John Howard staffer Perrohean (or Perry) Sperling, telling us that in addition to her work with Howard, she was also a senior policy adviser to former Victorian Liberal premier Ted Baillieu. We found that she had indeed been recruited by Baillieu in 2011 as a “key adviser” at the same time future Liberal Party federal director Tony Nutt became director of the then-premier’s private office. We’re continuing to fossick through the list of appointments and reappointments, but let us know if you know more.

Don’t look now. Well, if there is anything you can say for the Australian Christian Lobby, they don’t waste any time. A flyer featuring comments made by Defence Industry Minister Christopher Pyne last weekend — in which he stated that marriage equality was just around the corner in Australia — has been sent to residents in his South Australian electorate of Sturt. As tweeted yesterday, the flyer seems to try to make the rainbow flag look particularly menacing. “Sooner than everyone thinks” it reads, with cutouts from papers reporting the mini-furore started when Pyne dared to say something remotely positive about the LGTBI community. The flyers are authorised by Lyle Shelton at the ACL. 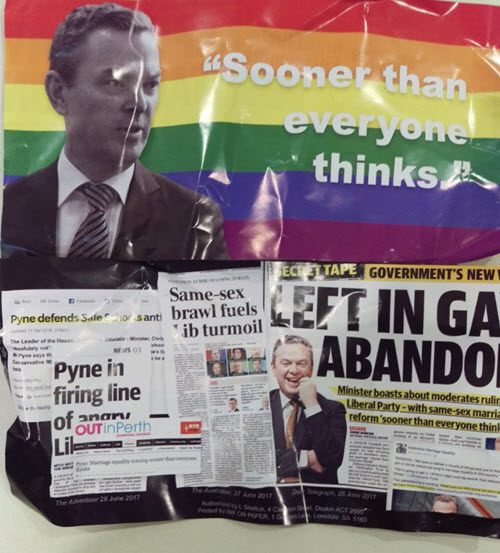 The unintended consequence from the ACL leaflet might be to encourage people to vote for him.

Sir,
I must protest. With the Chief Scientist taking also the title and perhaps a future role as the Chief Electrician when will modern society admit that recently there are perhaps, “too many Chiefs and not enough Indians”.
Mick Handcock
Chief Engineer

So the Herald-Sun apologised for Mr Bolt’s apparent falsehood. Did Mr Bolt apologise?

On second thoughts, perhaps Mr Bolt does not have any need to apologise: he was merely commenting on the basis of a news report which turned out to be incorrect. I suppose the publisher takes full responsibility for anything that is published, so it is not Mr Bolt’s fault – after all, The Australian probably considers itself a paper of record.

Michael, I would like the Press Council (hahahahahahahaha) to enforce the following. When a retraction is made in a paper for incorrect / false reporting that in be done on the same page, same position, in the same font & in the same size as the original.
p.s There only seem to be Michaels reading today.

Another day? More BS news from Blot on the Political Landscape and his Limited News editors?

I’ve read quite enough of Hartcher to recognise a poor thinker, still beholden to neoliberal thinking who works as a cheer leader for whoever is the current PM, and sometimes the former as well, as long as they are from the LNP, and for heaven’s sake don’t be a female PM.

Normally excellent is a phrase I would never use in the same sentence as Peter Hartcher.

Except in that one!