The Walkleys board scraps its international journalism category.

Today in Media Files, the Walkleys board is being asked to reverse a decision to scrap its international reporting category, and Nine has been busted spruiking a “live” performance by Katy Perry when she was actually on her way out of the country.

Walkleys scrap international award. The Walkley board has come under fire for canning the international journalism award in a shake-up to categories announced on Friday. A petition has been drafted by the ABC’s Sally Sara to be sent to the board in protest. Posted on Facebook by journalism academic Jenna Price, the letter asks the board to reverse the decision. “Reporting overseas also comes with specific risks and challenges. It is not exclusively the domain of foreign correspondents — some of the most memorable reporting has also been delivered by Australian-based journalists on assignment overseas,” the letter says.

The board has also scrapped the interview, journalism leadership and artwork categories, but a joint letter from outgoing advisory board chair Kate McClymont and her incoming replacement, Sky’s Angelos Frangopoulos, said work that would previously have been entered in these categories could be entered elsewhere:

“Consolidating categories is even harder than cutting down a story that’s over length  –  you’re always killing someone’s darling. But with industry advice, we’ve refocused, merged and tweaked some categories, and dropped a couple.”

International reporting has been increasingly the domain of syndicated content or freelancers for Australian news organisations. The Seven and Nine networks both have correspondents in London and LA who take care of most overseas reports. The ABC cut back its foreign offices in 2014, when it scaled back its offices in New Delhi, New Zealand, Tokyo and Bangkok.

The board has also shaken up some of the existing awards. The headline category now also includes tweets and Instagram posts. There is also a new innovation award.

The magic of television. Daily Mail Australia has sprung Channel Nine spruiking pop star Katy Perry’s performance as live when she was already on her way out of the country. Perry was papped at Sydney’s airport an hour and a half before the “live” performance on last night’s final of The Voice. A Nine spokesman confirmed the segment was pre-recorded, saying, “The process for live television never changes but some elements are pre-recorded to enable staging changes and band reconfiguration that is not possible in traditional commercial breaks”. 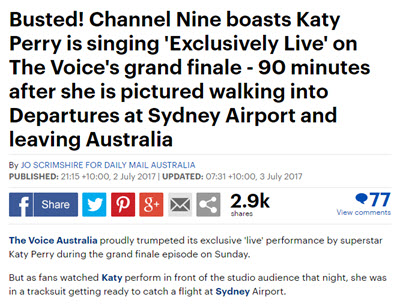 Perry was also back on the telly this morning, co-hosting Seven’s Sunrise. This was pre-recorded too, but the network was a bit more upfront with viewers, letting fans know last week when they could come down to the studio to catch a glimpse of the star. A spokeswoman said: “Katy Perry has recorded her portions of the show. We let fans know that last week by inviting them to come down and see her during her appearance.” But if you’d missed those call-outs last week you might think from the set-up and this tweet that Perry was live on the couch this morning: 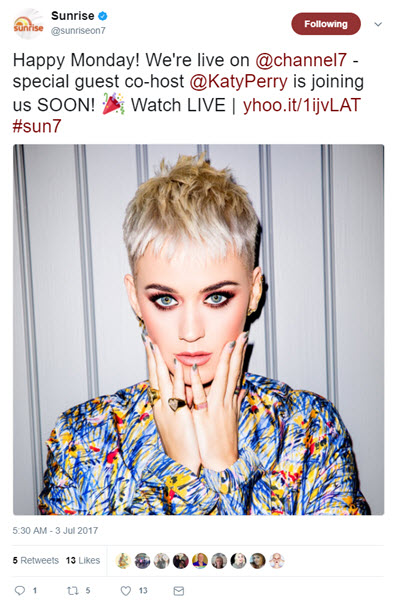 Fairfax off the hook for strike action. The Fair Work Ombudsman will not pursue Fairfax Media employees who went on strike in May over staff redundancies. A spokesman for the ombudsman told Crikey it had monitored the wildcat strike, but it considered the impact on the community, employer and the fact that Fairfax Media did not apply for an order to stop the action. The spokesman said the action appeared on its face to be unlawful, but the ombudsman had decided not to actively pursue any action against the strikers.

“After assessing the matter against our enforcement and compliance polices, including considering the level of impact on the employer and the community, a decision was made not to prioritise the matter for enforcement action.”

The spokesman also said the ombudsman had been in touch with Fairfax to make sure it did not pay workers involved.

Fairfax employees went on a seven-day strike when management announced 125 jobs — a quarter of its newsrooms — would be cut from the metropolitan newsrooms in a bid to cut costs.

Trump’s war on ‘fake news’ continues. US President Donald Trump is continuing his bizarre war on the media, and, in particular, cable news channel CNN. After he started tweeting about a feud with MSNBC hosts Mika Brzezinski and Joe Scarborough last week, the president has used his Independence Day long weekend to continue the long-running spat with CNN, firstly by tweeting that he would rename the network to “FraudNewsCNN”, and then posting a doctored wrestling video that showed Trump tackling a person with the CNN logo as a head. 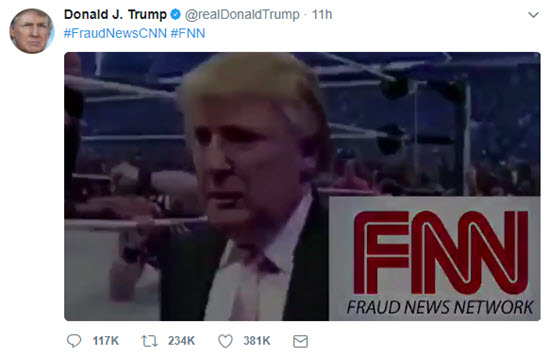 News Corp ramps up cost-cutting. The pace of end of year cost-cutting is accelerating at the Murdoch family’s News Corp, which is facing the prospect of reporting losses of more than $1 billion when the 2016-17 results are released in early August.

Management is making deeper cuts at Dow Jones Co and The Wall Street Journal in New York. In separate developments on Friday, the Journal has decided to slash printing of the paper outside the US as part of a wider move to boost digital subscription. The controversial right-wing website Heat Street will end its life as a standalone business and disappear into the Marketwatch.com website.

News is due to report its fourth quarter and full-year figures on August 11. It has already cut the value of its News Corp Australia long-life assets by US$310 million (or nearly half a billion dollars). Last week’s REA write-down takes the gross value to close to A$900 million. The costs of revamping Heat Street and stopping printing of the paper outside the US is expected to be in the millions of dollars. These will be in addition to the US$227 million (around A$310 million) in impairment losses taken on News Corp’s 50% stake in Foxtel. News directors have already warned that up to $US1.4 billion in possible impairments in its news and information division could be confirmed after another round of impairment testing ahead of the announcement of the 2016-17 results next month. As a result multi-million dollar losses are expected to be revealed by News for its 100%-owned Fox Sports Australia as well.

In New York, The Wall Street Journal is already in the midst of savage cuts to staff numbers and other costs aimed at trimming US$100 million a year from operating costs by 2019. The changes to printing in Europe and Asia could form a big part of those reductions. In Australia News Corp has already cut hundreds of journalist, photographer and back-office jobs.  — Glenn Dyer

Glenn Dyer’s TV ratings. As mentioned above, fairytales galore in TV last night and this morning, all involving one person — Ms Katy Perry — who was on the plane as she sang on the final of Nine’s The Voice and on the final approach on the ground in Los Angeles as she started co-hosting Seven’s Sunrise just after 7am.

Perry seems to have boosted the audience by around 120,000 last night and past last year’s national figure of 1.78 million for the winner announcement — this year it was 1.91 million. The grand final 2 (as Nine coded it) was Perry’s segment and it averaged 1.84 million, and the performance part of the final averaged 1.68 million nationally, or an average of more than 1.76 million, which is not to be sneezed at. We will know how Sunrise’s figures went this time tomorrow.

Does anyone outside the media seriously think Trump is going to “get better”?

Well he’s certainly getting better at being appalling. Sorta like Red Dwarf which began slowing down but was still going faster, just more slowly.

From Media Files:
“A spokesman for the ombudsman told Crikey it had monitored the wildcat strike, but it considered the impact on the community, employer and the fact that Fairfax Media did not apply for an order to stop the action.”