Going to the dogs. Who says the Andrews government in Victoria is out of touch? It know what’s missing from the lives of Victorian women — greyhound racing! Continuing an Andrews government tradition of subsidising the torture and killing of dogs, Victorian taxpayers forked out several thousand dollars for Cranbourne Greyhound Racing Club to run a “Girl’s Night Out” last Friday. According to a media release for this exciting event, there was “a range of activities on offer including a pamper parlour featuring makeup touch ups, hairstyling, mini manicures and express massages”‘.

“The 2017 Girls Night Out race meeting provides the club with a great opportunity to promote greyhound racing in Cranbourne and encourages more women to head to the track,” local MP Jude Perera enthused. No expense was spared by the club, with a “three-course dining packages for $70” and a “complimentary racebook”. If that wasn’t enough to get the “girls” frocking up for a trip to Cranbourne, “master-mind comedy hypnotist Damien Mind” was there. Perhaps Mr Mind (call us sceptical but we’re not sure that’s his real name) was able to hypnotise the “girls” into forgetting this is an industry that kills, by its own admission, 3000 dogs a year. And Victorians help pay for it.

Contemptible? Not here. State Liberal MP-in-waiting James Newbury (he’s been preselected to replace outgoing MP Louise Asher in a blue-ribbon seat) has taken a leaf from his federal colleagues, using the Brighton terror incident, in which Yacqub Khayre killed Kai Hao, as a way to say the legal system is “too soft”.

“It may sound simplistic, but the plain truth is our legal system is too soft. It offers violent criminals second and third chances, when some criminals use that chance to commit even more violent and devastating crimes.” 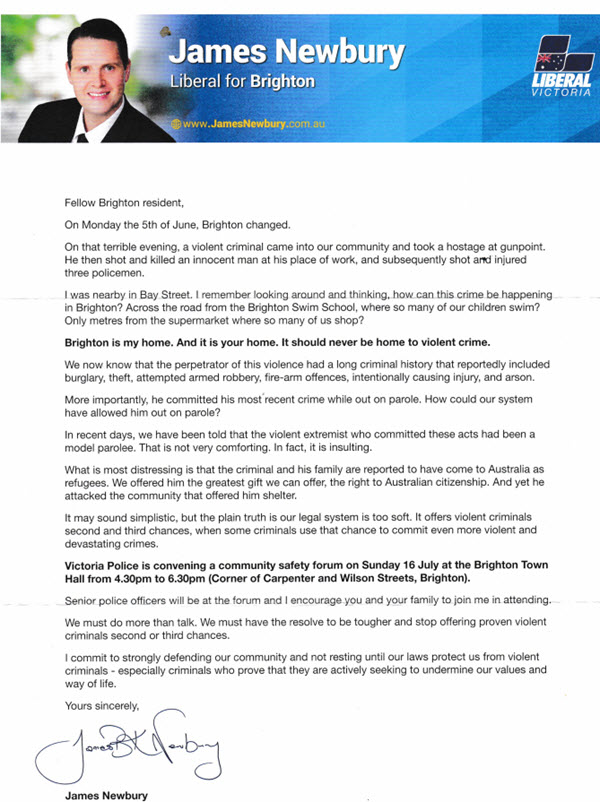 More centralisation at News. What’s happening at News Corp? We hear that the bloodletting and job losses are not done. In the past month up to 70 photographers were shown the door, with outsourcing adopted in order to cut costs. Many of the snappers leaving News will end up at Australian Associated Press — from which the papers will now buy their photographs. A tipster tells us the pain isn’t over, with the Sunday papers about to be targeted in a bid to centralise more functions in Sydney.

Our new saviour, old king coal. “Coal plants ‘cheaper’ than renewables bill” screams the front page of The Australian today, with a “new technical study” apparently showing that the government should be building a new low-emissions coal-fired power station. 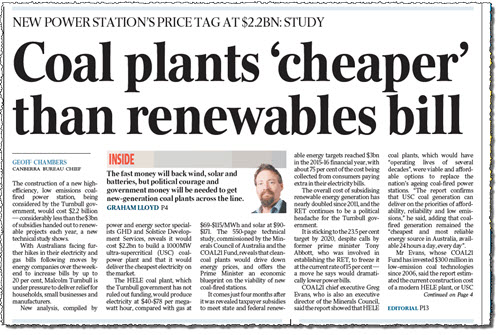 Sounds legit, right? The third paragraph tells us the analysis was compiled by “energy sector specialists GHD and Solstice Development Services”. And just who are they? Solstice Development Services lists the Australian Coal Association and Transfield as its clients on its website. You have to wait until the fifth line — all the way over in the third column — to find out this study was paid for by the Minerals Council of Australia and the COAL21 Fund. 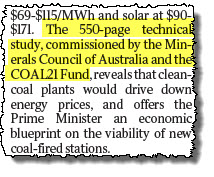 The COAL21 Fund is a Minerals Council initiative, started in 2003, to demonstrate that coal capture and storage, as well as emissions abatement, can work in Australia. Its page on the Minerals Council website says:

“The Fund is intended to help secure the future value of Australia’s black coal resources — which are owned by Australian states/territories — in a carbon-constrained economy and help maintain the coal industry’s social license to operate.”

So coal industry likes coal. Funnily enough, this one didn’t get the red ink “exclusive” treatment at the Oz.

Dead greyhounds and the regulator that’s not allowed to regulate

There is no such thing as baseload wind or solar, not at any price. If we are to replace those coal-fired power stations with non-carbon generation, it should be nuclear. The sites have cooling water, massive grid connections and a community around that would be heartily relieved to have clean air.

And deadly poison hanging around for a millennia. Nor is nuclear power cheap – I’ve yet to see the pro-nuclear lobby spruiking a locked-on metered power price. The reason they don’t is because they are critically extremely expensive plants to run.

I will always treasure the memory of the original claims in the 50s from the nuke industry that “the electricity generated would be too cheap to meter” – ah, thems wuz the daze.

I seem to remember reading that the only way that nuclear could be cost-competitive would be the imposition of a carbon price. And not at the piddly levels negotiated between the Greens and Labor. It would be more in the $50-100/t range (at least). The problem is that other wachky forms of low-emission technology also become viable at these prices, meaning that there would also need to be some other non-market (read ideological) driver for nuclear plants. And that is before you factor in the NIMBY factor which alone would probably rule it out, and the lack of any background expertise or nuclear infrastructure in Australia.

I’m not instinctively anti-nuclear. I realise that “organic food” is marketing label and have no problems with GMOs. I enjoy beer more than chardonnay, and can drink coffee with or without milk. But I just can’t see nuclear as a realistic (ie commercially or socially viable) solution for Australia.

No, but wind or solar with batteries equals baseload at about 1/10th the price of nukes, wind and solar used to pump water back up hill = baseload, probably only 1/5th the cost of nukes. Distributed renewables alleviate much of the baseload issues, good connectors around a genuine national grid, we’re all good here, and we’re not going to have to handle extremely toxic waste.

Wave and tidal power are consistent, predictable and could produce what you would call base load.

Really? Go and ask them if they want nuclear plant built there.

Dear deluded Dodger – you can always be relied upon to write tripe but this one comedy gold and will run & run – build a nuke coz “ a community around that would be heartily relieved to have clean air.“.
One question, where does one buy lead lungs?

Wouldn’t want to be a duck or a greyhound in Victoria.

“James Newbury – fear and loathing working for You!”

“The Oz – too thick to wipe your arse and too thin for curtains – succour for the Right suckers.”

I should add, that we’ve found the neighbours’ copies of the Oz quite handy for my parrots to poo on – they’re sitting on eggs at the moment so the size of the broadsheet papers saves me a lot of bending and cleaning up duties.

@ Fish and Cliff and to whom it may concern,
One problem in Australia is that we are so far behind the rest of the world that we keep on reinventing the wheel.
Sure it is mainly due to our antediluvian politicians mindset, ably assisted by Murdoch’s Muppets.
Some figures from the other world to think about.
In the UK, the new nuke power station (due to start 2017 actual start 2026, perhaps, power supplied to the grid at Pounds Sterling 92.5 per MW/hr, contracted. That’s AU$ 156.69 per MW/Hr
Bids for power from wind accepted by Germany, Euro 4.49 per MW/Hr. That’s A$ 6.68 per MW/hr. Turbines to be installed by the power Providing Companies without taxpayer subsidy!! Total capacity auctioned 1,490 MW
Royal dutch Shell (yes the oil Co.) Bought into a wind farm 50%, with production capacity of 680 MW/hr with more farms to come.
No wind = no power is true, BUT the wind if not blowing in one place say, Queensland. Then it is blowing somewhere else, say Victoria or Tassie. If our interconectors were up to scratch plus our other existing supplies we shouldn’t have problems. I do include the existing coal fired generators. I also consider pumped storage and tidal generators should be included.

No wind = no power is true.

Equally true is a lot of wind = too much power.

That is where the overall electricity grid should come into it – storing excess wind energy when the wind blows strong and deploying that energy when wind falls short.

Or I should say wind and solar.