Howzat: how the tide turns when unionists wear cricket whites

How does the relatively sympathetic coverage of Australian Cricketers' Association pay demands compare with industrial action from any other union?

The pay dispute between Cricket Australia and the Australian Cricketers’ Association passed the deadline for a new deal on Friday night, leaving more than 200 players unemployed. The negotiation of media rights has been delayed, the Australia A squad has announced they will not go ahead with the scheduled tour of South Africa until a pay deal is resolved, and it has been speculated that Cricket Australia might have to license players for upcoming series, including the highlight of the Australian cricket calendar, the Ashes.

Australian cricketers are holding out for a fixed share of Cricket Australia’s revenue, while Cricket Australia is only offering a share of profit. So how is the stand-off being reported? Any mention of union ratbags or thugs?

A striking example can be found in Joe Aston’s Rear Window column for today’s Australian Financial Review — Cricket Australia’s David Peever is living in Narnia. The columnist has been highly critical other industrial action, most recently calling his striking Fairfax colleagues “dickheads” when they undertook an unprotected strike in response to the cutting of 125 editorial staff in May. But here, he was entirely on the side of the players, condemning Cricket Australia for denying players a fair share of the money their talent generates, and concluding “despite CA’s attempts, the players cannot be divided and conquered”. 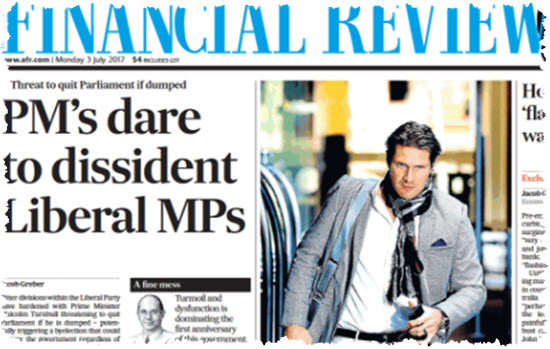 Back in May, The Australian‘s Wally Mason blasted the “millionaire cricketers holding the Ashes to ransom” but the Oz has since covered the dispute with restraint, as has the Daily Telegraph. The Herald Sun even published a column by ACA head Alistair Nicholson on the “holes” in Cricket Australia’s argument.

It got us thinking, how does the coverage of this dispute compare to that of activity by other unions?

The Australian on John Setka and the CFMEU:

“If the CFMEU were a dog, it would be an irascible, snarling breed, the kind only a tattooed misfit with a pierced nose and ­absurdly large biceps would dream of keeping as a pet. So long as it remains part of what Bill Shorten calls “the mighty trade union movement” the CFMEU will continue to embarrass the party with its thuggish behaviour.” — “Union pit bulls are eating their own jobs” Nick Cater

“… [ACTU secretary Sally] McManus brooks no criticism of the CFMEU. She backs its right to break the law if it thinks it is ‘unfair and unjust’. This is untenable and absurd but McManus is defiant. The CFMEU exercises enormous power inside the ACTU and Labor. McManus won’t challenge it, nor will Bill Shorten.” “ACTU boss Sally McManus out to rewrite the rules of industrial order” Troy Bramston

“Bill Shorten must show leadership on the CFMEU or else thuggery will become an acceptable part of Australian politics.”The latest demonstration of intimidation by the union — via its Victorian boss John Setka — is the final straw for a union which appears to act as a law unto itself.” — “Why not refuse CFMEU cash, Bill?“John Lyons

“The nation’s leading cricketers have refused to yield to Cricket Australia’s ‘threats’ while vowing to turn up to work as usual on Monday — without pay. The players will be unemployed from midnight tonight but they remain rock solid in their stand against the pay offer from the sport’s governing body.” “Cricketers say they’ll turn up without pay, as dispute ratchets up” Andrew Faulkner

The Australian Financial Review on Sally McManus and the ACTU:

“… the maiden speech of the new ACTU boss, which marked the sad and rather pathetic decline of the modern trade union movement from an institution looking out for the long-term interests of its members, and even the nation, into an undergraduate organisation, railing against abstract ideas like neoliberalism, denouncing ‘wage theft’ and advocating breaking laws it doesn’t like … she said that law breaking was all right if the law was unjust. Given time to backpedal and put those complaints into context, in her first major speech, the severe Ms McManus declined to do so.” “Sally McManus and the long sad decline of the ACTU” Editorial

“In plain English, Mr Tumnus and friends want the sport’s current and future stars (its only real assets) not to get a share of the cash cricket actually generates (tax-free, as a not-for-profit), but what’s left over after Jolimont Street spends however much of it they want to.”  “Cricket Australia’s David Peever is living in Narnia” Joe Aston

The Daily Telegraph on Maurie Mulheron and NSW Teachers Federation:

“The boss of the state’s teachers union has publicly promoted civil disobedience and likened the disregard for the law by ­unions to the Civil Rights Movement and the campaign against the Vietnam War. Introducing the controversial new ACTU chief Sally McManus, who herself has urged unionists to break the law, NSW Teachers Federation boss Maurie Mulheron noted his organisation had ­engaged in ‘many illegal strikes’, to rapturous applause.” “Teachers union pushes anarchy, saying civil disobedience is just like Vietnam War protests” Kylar Loussikian

The Daily Telegraph on the Australian Cricketers’ Association:

“Frustrated players united as one at an extraordinary meeting in Sydney adamant Cricket Australia’s hardball tactics left them no choice but to hit back with their own powerful message and down tools for the A tour, unless a new MOU is struck by Friday.” “South Africa cricket tour in danger unless Cricket Australia come to party with new MOU” Ben Horne

Remember that despite his entrenched opposition to collective bargaining John Howard supported the Australian cricketers in a pay dispute as well. One set of rules for his favoured sportsmen (it didn’t involve women if I remember correctly) and another for workers who might actually have to work rather than ‘play the game they love’. That says more about a set of values than anything I can think of at the moment.

I have less than zero interest in sport of any kind but wonder if the mudorc’s relatively soft handling of the strikers (which is, I believe, a cricket term) compared to other unionists withholding their skills might have something to do with their soon having a TV station needing viewing fodder.
If Packer could do pyjama cricket, perhaps mudorc could do Page 3 style, with nude cheer leaders to fill in the long lacuna?