Today in Media Files, the papers react to charges laid against Cardinal George Pell and the Herald Sun says goodbye to 19 photographers today as part of News Corp cuts.

Pell in the papers. Charges laid against Cardinal George Pell have dominated today’s front pages, as editorials in most of the major dailies have echoed calls from the Catholic Church and Victoria’s Director of Public Prosecutions to exercise restraint to ensure a fair trial. The Fairfax papers have also published a comment piece by the Newcastle Herald‘s Joanne McCarthy, who won a Walkley Award for her work reporting on child sexual abuse in the Catholic Church.

Snappers out. The Herald Sun says goodbye today to 19 of its photographers as part of cost-cutting at News Corp, announced earlier this year. The Hun has published a tribute by chief football writer Mark Robinson to departing sports photographer Wayne Ludbey, which calls him a “cantankerous bastard”:

“He’d fight with sports editors and editors, believing he knew the best snap and he knew the perfect crop. Often he’d walk off in disgust in the newsroom knowing his photograph would be butchered, but most times it would with a sense of satisfaction that he knew best.” 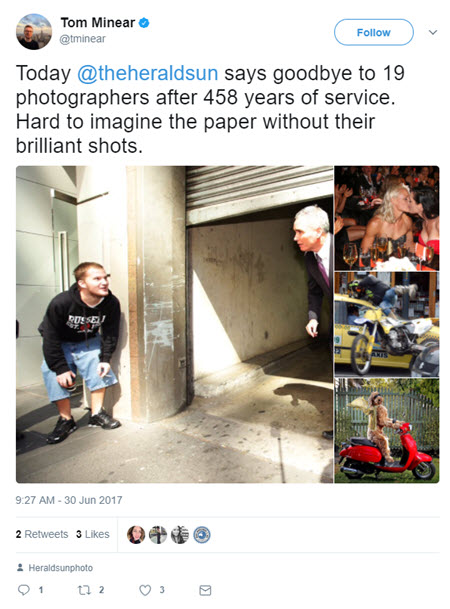 News Corp announced it would be slashing its photography and production desks in April. Its newspapers will keep a core group of photographers, but they will rely heavily on agency photographers from wire service AAP, which promised job interviews to any News Corp snappers made redundant.

NY Times walkout over newsroom cuts. The brawl between New York Times management and its staff deepened yesterday when reporters in the paper’s New York newsroom staged a symbolic 15-minute walkout in support of copy editors, whose ranks are being slashed in half. The Times journalists’ union had protested by letter the previous day, saying editors were being demeaned and their work disparaged.

Executive editor Dean Baquet and managing editor Joe Kahn made it clear that while they appreciated the work of editors, the cuts were going to happen and the remaining editors (between 50 and 55, down from more than 100) would be more than at any other paper.

But Times reporters sent their own letter to Baquet and and Kahn to protest against the cuts to editor numbers and then walked out of the building at 3pm on Thursday. They walked around the Times building with signs protesting against the sackings and supporting the editors, careful to describe it as a break rather than a walkout, a term that could put them in breach of their employment contracts. 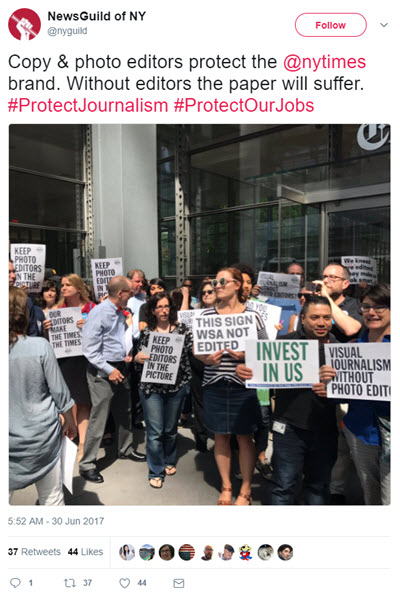 In their letter the reporters said editors saved reporters and the paper every day from countless errors, and cutting their numbers would undermine the paper’s reputation.

“We writers are not in need of a companionable read before someone hits the send button on our articles. We don’t need a stroke and a purr. We want forceful, focused intellects brought to bear on our work. We realize that painful change is afoot. We’ve accepted and borne the brunt of many rounds of layoffs and buyouts. None were as destructive to morale — nor, we fear, as destructive to The Times — as this one. It is something different in kind.”

A spokesman for the paper told Deadline.com that it took the concerns seriously but the cuts would allow it to increase the number of reporters, which was vital to its future. “Even with these changes, we will have more editors than any similar news outlet and our editing standards and processes will remain the most robust and rigorous of any news organization,” he said. So not much sympathy there. — Glenn Dyer

Walkley changes. The Walkley Foundation has announced changes to its advisory board this morning, with chair Kate McClymont stepping down after her three-year term. Sky‘s Angelos Frangopoulos, who had previously been deputy chair, will take her place. Guardian Australia‘s Lenore Taylor will be the new deputy chair, and BuzzFeed‘s Simon Crerar has also joined the board.

Walkley Foundation chair Quentin Dempster thanked McClymont for her service in a statement this morning, saying she had helped guide the Walkleys through changes to the awards, which will be announced this afternoon.

Press banned from Grenfell council meeting. London’s Kensington and Chelsea Council has cancelled its first meeting after the Grenfell tower fire after a judge ruled it must allow the press in. The council was due to discuss the fire and had said the meeting would be closed to the public and media because of safety concerns. Media outlets including The Guardian took the matter to the High Court, which ordered the council to allow members of the media with press cards to attend. In response, the meeting was cancelled. The Guardian reported a council spokesman as saying a public meeting would result in disorder, and there was no distinction between the public and the press:

“Asked on what basis the media was also being excluded, a different council spokesman said: ‘The press are the public. There is no distinction between them.’

“Further asked if the council had evidence press could contribute to disorder, the spokesman said: ‘Well, I’ve seen the media kick off before.'”

Video of the day. Good Morning Britain host Piers Morgan has been shut down by co-host Susanna Reid while he was banging on about others banging on about politics. The controversial host has daily rants on the program about all manner of things, and when he started to complain about people using Facebook for political rants, Reid delivered some shade, saying, “I know what you mean. When someone keeps going on and on and on and you just need respite and a break. And you just wish you could defriend them but you’re just forced every day to listen to their views. I know exactly how you feel.” Watch the video here. This montage of Reid reacting to Morgan’s comments is worth a watch, too. 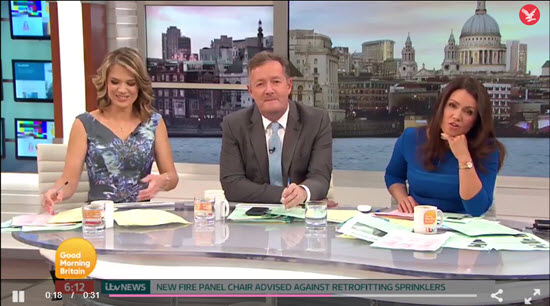 Glenn Dyer’s TV ratings. MasterChef sparkled for Ten and TV viewing generally last night and was easily the best thing on — 1.23 million viewers agreed across the country, and it was the most watched program apart from the Seven and Nine news broadcasts from 6 to 7pm.

Nine’s NRL game between Parramatta and Canterbury started attractively and then sagged into a very unattractive arm wrestle. Some 680,000 watched on Nine’s main channel and Gem digital and a further 199,000 watched on Fox Sports. Janet King averaged 724,000 for the ABC from 8.30pm. Perhaps with her recent story line of investigating sport, she could take a look at why last night’s NRL game became so boring.

Sunday night sees the final of The Voice and Dr Who — we will meet him again sometime, but I’m not so sure about The Voice winner? — Read the rest on the Crikey website

Pell the martyr: first cultural warriors, now shadowy Vatican types are after him

Morgan the essence of the subjective msm – whining about plebs doing what they (the media) themselves do for money.

I recently took up the oz offer of $8 for 8 weeks online (I won’t be renewing). Similar to here, readers can leave comments. I note that after articles about Pell, there’s no such ability. Hmm.

To be fair, the Pell cases is sub judice.

Plenty of articles, option pieces and editorials though.

Great wrap-up as usual but the Herald Sun photog is Wayne Ludbey, not Lubley

Thanks Michael, fixed now. Wayne Ludbey is one of my favourite photographers at the Herald Sun, don’t know how I let that one through!