Who will get the nod? One of the major recommendations to come from the Finkel review into Australia’s energy market was the establishment of the Energy Security Board, which would be tasked with implementing the recommendations, to report to the Council of Australian Governments (COAG) energy council. The board would have a number of functions, including “responsibility for the implementation of the blueprint and for providing whole-of-system oversight for energy security and reliability”. So it’s a pretty big deal. The Finkel report recommended that the board have an independent chair and deputy chair. A tipster tells us that the shortlist of names for chair won’t be much of a surprise to those familiar with the energy area. It includes recently retired chief of staff to Prime Minister Malcolm Turnbull Drew Clarke, along with former industry minister Ian Macfarlane.

Macfarlane was Turnbull’s lead negotiator with then-minister for climate change Penny Wong when Turnbull was leading the party in support of a carbon pollution reduction scheme (and we all know how that ended). Our tipster says former Labor energy minister Martin Ferguson rounds out the list, but it is Clarke who is tipped as the leading candidate. Before his time in the PM’s office and even before his time as secretary of the department of communications, Clarke was secretary of Department of Resources, Energy and Tourism, and was awarded a public service medal in 2009 for “outstanding public service in driving significant reform of the energy market”.

The COAG energy council is expected to meet next month to vote on the board appointment. We will watch with interest.

“These stories were not only award-winning, they also led to real-world results. Case in point: as a result of the reporting in ‘Australia’s Offshore Cruelty’ by Roger Cohen, the Australian government agreed to pay more than $50 million to those it has abused.” 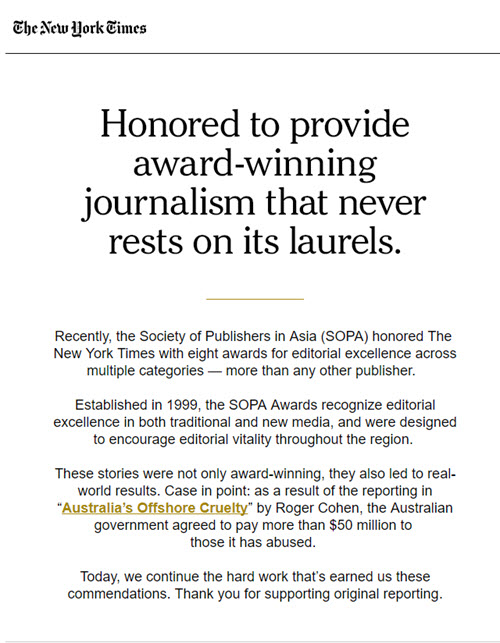 While the Grey Lady’s op-ed on Australia’s offshore detention program was stirring, we’re sure the many Australian news outlets that have been campaigning on the issue for years wouldn’t feel that the government’s recent settlement with asylum seekers in Manus Island was all down to The New York Times.

To be a fly on the wall. In his column in today’s Australian Financial Review, Rear Window columnist Joe Aston noted that Foxtel CEO Peter Tonagh and his predecessor, Kim Williams, were spotted having a chat at a Sydney hotel on Wednesday afternoon. After a bit of history about the duo at Foxtel and News, Aston observed that Tonagh is a Ten Network director and:

“… we doubt he’s overly happy with The Australian‘s media editor Darren ‘Lurch’ Davidson, who on Monday wrote that ‘Ten’s board may not have undertaken scenario analysis on cash-flow modelling’ before the struggling company hit the fence. The Oz has since apologised.

“Which would put PT in the right company — Kimbo sure didn’t enjoy Lurch’s post facto mission (under The Oz’s previous editor Chris Mitchell) to discredit his stint at the helm. But hey, that also puts Lurch in fine company: Williams, understandably, doesn’t like us, either.”

That’s one way to put it — Williams isn’t all that enamoured with Aston, going so far as to sue Fairfax over a column Aston had written. That ended with Fairfax paying Williams $95,000 plus costs in early 2014 after a 2013 report from Aston that incorrectly claimed Williams had stormed out of a meeting of the Sydney Opera House Trust, which he used to chair.

Were they chatting about how to take on a gossip columnist?

That Turbott nod :- Macfarlane?
The clown who accepted a watch from a Chinese “lobbyist/acquaintance” and rather than have it appraised by a jeweller in his electorate, Canberra or wherever – chooses DIY Google – for an evaluation to put down on his “gift register”?
“$40,000 marked down to $400!”?
What could he do with emissions?

I was referring to Macfarlane and that time (in 2013) when he accepted a watch (probably) from Li Ruipeng (while Robert and Abbott got two each) – and when it came time to declare the value for the pruposes of the “gift register” he looked up “fake watches(?)” on Google – rather than going to a any jeweller – and came up with a “Google” value of between $300 and $500 : rather than the $40,000 it was worth.
But that’s seems to have been deemed “inappropriate”?