The media company holding the Trump White House to account is ... Playboy.

Today in Media Files, a freedom fighter from Playboy has stood up for free speech at a White House briefing, and media monitoring companies Isentia and Meltwater are engaged in trial by press release.

Brian Karem said he went to the briefing with a plan to ask about healthcare (which he did, earlier), but when Sanders responded to a question from Breitbart with a fake news spiel, he’d had enough, saying:

“Any one of us are replaceable. And anyone of us, if we get it wrong, the audience has the opportunity to turn the channel or not read us. You’ve been elected to serve for four years at least. There is no option other than that. We’re here to ask you questions. You’re here to provide answers. And what you just did is inflammatory to people all over the country who look at it and say, ‘See, once again the President is right and everybody else out here is fake media,’ and everybody in this room is only trying to do their job.”

Writing about the exchange on the Playboy website, Karem said the press had been bullied for six months by the administration:

“But I don’t like bullies and I don’t like the entire institution of the press and free speech being castigated for no other reason than we either get stories wrong — which happens, and it should be then responsibly corrected — or because we report news the president doesn’t like — which seems to happen even more often than getting stories wrong. (Note: Our founder, Hugh Hefner, believes in the First Amendment with all his heart.)”

Watch the video of the exchange here. 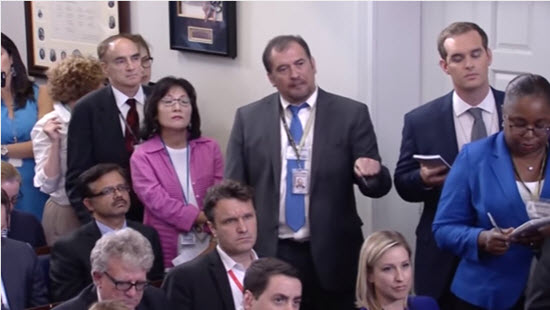 Trial by press release. The Isentia case against competitor Meltwater was back in court last week, where an application for Meltwater to produce an affidavit detailing all its Isentia accounts was dismissed. The case, being heard in the Federal Court in Sydney, is that Meltwater has been free-riding off Isentia’s licences to distribute press clippings and other content as part of its media monitoring business. Until the case is heard in full, Meltwater is prevented by a court order from any of the alleged actions, including providing content from Isentia accounts to its own clients.

When the application was dismissed, Meltwater issued a statement saying that it had been successful in court:

“The outcome of today’s hearing is positive for Meltwater. It will be some time before the Court finally rules on the allegations, however, Meltwater intends to strenuously defend the matter.”

Isentia retaliated by press release saying that statement was “deliberately misleading”, as the information Isentia was trying to get through a special order should be given through normal discovery later in the court process.

Regulator tuned in to Ten developments. Channel Ten’s woes will a topic of discussion by regulator the Australian Communications and Media Authority at a board meeting today. ACMA said in a statement to Crikey that it was “continuing to actively monitor the developments in relation to Network Ten”.

The Golden Tonsils’ heavenly plan. If you’ve ever wondered what will happen to John Laws’ golden microphone when he dies, the answer is finally here. Speaking to the Sydney Central suburban newspaper, Laws said he planned to be broadcasting for eternity. “I’ll have them put it in my coffin when I go to the big broadcasting studio in the sky,” he said.

Copy editors protest over New York Times cuts. The august New York Times (fresh off two quarters of Trump bumps in digital subscriber numbers) has started cutting 100 of 155 copy editing jobs in the main news room, and the editors are not taking it lying down. The cuts to editing roles at the paper are a major part of the paper’s 2020 report, released earlier this year, which plots a pathway to a digital future in the next four years. Part of that involves significant expansion offshore in the UK, Australia and Canada and a greater emphasis on reporting online and in the paper, which is being slowly recast.

The protest from editors (which was leaked from inside the paper, along with the reply from management) is the first sign of the pressures building inside the Times newsroom over the changes. In a letter to the paper’s two top editors, Dean Baquet and Joe Kahn, copy editors have accused management of comparing them to “dogs urinating on fire hydrants”. They also said management had betrayed them in the current round of cuts via contract buyouts or retrenchments. The Times plans to use the savings from hacking into its editor ranks by hiring up to 100 new journalists. The letter to management from the union at the Times asks management to work with them on a new number, instead of the “dumbfoundingly unrealistic” cut to 50:

In their reply The Times‘ two top editors did not back away from the planned cuts:

“The Times has far more editors relative to reporters or to the number of stories we publish than any of our traditional print peers or our newer digital rivals. After this restructuring, we will continue to invest far more in editing than any of our competitors do. That is because we value meticulous editing. At the same time, we feel a compelling need to reduce separate layers of editing, to have reporters and front-line editors play a bigger role in all aspects of story production and promotion, to create a more natively visual news report, and to speed up production.”

The spat comes as the Times today introduces a paywall around its popular NYT Cooking vertical — its popular recipes and features had previously been available to non-subscribers. — Glenn Dyer

First of News Corp write-downs revealed. In the first of what’s expected to be several similar announcements from News Corp, its 61% online real estate arm REA Group has revealed write-downs in the value of its Asian assets totalling $180 million on a preliminary estimate. In a statement to the ASX today REA said, “The impairment relates to the carrying value of goodwill for the group’s Asian reporting segment and reflects a downturn in market conditons [sic] in Asia.”

REA is the largest investment News Corp has (REA is valued at A$8.9 billion and News Corp at A$10.9 billion on the ASX). The news of the write-down means that it will report a fall in earnings for the year, while News Corp will report another massive loss. The impairment will be on top of the A$700 million announced earlier this year in the value of long life assets at News Corp Australia and the value of News 50% stake in Foxtel). Partially offsetting the write-down will be the $161 million profit from the sale of the company’s European businesses — a nice offset and typical of the way companies such as News Corp sugarcoat the bad news.

Both News and REA balance their 2016-17 financial years and fourth quarters tomorrow. In its quarterly report in May, News Corp warned that after the write-downs at December, further impairments totalling US$2.4 billion were possible as at March 31, “of which $1.9 billion related to the News and Information Services segment and $0.5 billion related to the Cable Network Programming segment”. These write-downs could happen in the value of Fox Sports Australia, UK and US papers and perhaps the value of mastheads and intangibles in Australia.

A possible REA impairment was not mentioned, while Foxtel will write off the remaining US$22 million on its abortive investment in the Ten network.

In determining the carrying value of its assets, REA Group considers a range of macro assumptions including market conditions, volume of property transactions and new development projects. There has been a decline in several Asian property markets as a result of changes to government and banking regulations.

REA Group CEO Tracey Fellows said market conditions in Asia had been challenging. “We continue to invest in senior leadership to drive strategy and our focus on innovation and marketing positions us well for the market recovery,” she said. — Glenn Dyer

Offspring — welcome back, but perhaps a touch too Neighbours at times, but still a long in front of Wanted, and the equal of Janet King, although storylines are very different. Who says there’s a dearth of roles for females on Australian TV? Throw in Love Child on Nine and there’s a very solid quartet. All are far better TV and stronger roles than the Last Resort, Married At First Sight, First Dates, Seven Year Switch, Yummy Mummies and the Real Housewives of Melbourne and Sydney on Foxtel.

So ironic that it was the Playboy reporter Brian Karem who called out Sarah Huckabee Sanders re fake news. Why hasn’t there been much more uproar about Trump pretending his mug adorned the front page of The Times?

Playboy is Fake Boobs!
But seriously that doesn’t reflect well on the rest of the contingent who tacitly accept their treatment by the White House.

Loud John Jaws better not plan on broadcasting for long post mortem as gold has a very low melting point.
And in further news of a decline in standards, as pointed out above, it is an appalling indictment of the MSM that it took a hack from a skin mag to do what they, the self anointed great & good, should be doing.