How I managed to reference the most infamous fellatio-that-wasn't in the Senate.

In a frantic wheeler-dealer week of Senate sittings, with one marathon session lasting about 16 hours straight, things tended to get a tad delusional.

But even allowing for that, a swag of politicians (including the Prime Minister) were wondering how the hell Hinch could get Neil Armstrong and the moon landing into the Gonski debate.

It happened. Here’s how Hansard recorded my concluding comments, as I supported the much-amended “Gonski 2.0 Plus”, as the colluding crossbenchers dubbed it:

“And before I sit down, to steal from Neil Armstrong’s apocryphal story about what he really said when he walked on the moon: ‘Good luck, Mr Gonski!'”

Since then, I’ve had a heap of Hansonesque “Please explains?”

It was too salacious to detail in a publicly broadcast daytime Senate speech, but Crikey readers are mature enough to absorb anything. So here goes:

He did not say it. But an urban myth, believed by millions and googled to death, was that NASA censured the Apollo 11 astronaut’s historic words as he stepped out of the lunar lander, Eagle, and walked on the moon.

The conspiracy theorists claim he actually said: “That’s one small step for man, one giant leap for mankind — and good luck, Mr Gorsky.”

So who the hell was Mr Gorsky? And why wish him luck from outer space?

For the believers, here goes …

When Neil Armstrong was growing up in Wapakoneta, Ohio, he lived next door to Mr and Mrs Gorsky. One day, he kicked his ball over the fence. It landed under their open bedroom window.

It’s not true … but it’s now referenced in Hansard.

The commentators, and the Twitterati, had predictable fun last week as Parliament adjourned for the long winter break. We’re all going off on “free junkets to Europe”, and that image wasn’t helped by the announcement that we’re also getting a pay rise.

My “junket” will be as part of a parliamentary delegation going with Save the Children to Lebanon and refugee camps in Jordan, near the Syrian border.

I’ll report on it later, but it gives me a segue into the greatest put-down I think I’ve ever experienced. And it involved Save the Children.

About 35 years ago, Ron Walker, former lord mayor of Melbourne, invited me to go to the Sudan to look at the work STC was doing in Africa. The invite was spurred by reports I’d done for 3AW after travelling to the barren Gujarat province in India with Community Aid Abroad.

An added incentive was the promise of a rare interview with Princess Anne, who would be there for Save the Children.

On the last day of the trip, after hours of bouncing around in a Jeep in a dusty wadi near the Mali border, I scored the exclusive interview that her staff had been avoiding.

(When I got it, I was grilled by a pissed-off Fleet Street mob. My response: “I give good letter.” On our last night, I had peeled off from the group, gone back to my shack and bashed out a personal note, which I slipped to her aide-de-camp next morning.)

Late afternoon, HRH emerged alone from a straw-roofed mud hut in the middle of nowhere. I launched into my first question: “Your Royal Highness, as Patron of Save the Children, what do you think …”

She cut me off with a glare of Julie Bishop intensity.

“I am not the patron … Mother is.” Anne was only the president.

It seemed appropriate that, at that very moment, a donkey hee-hawed in the background.

It’s true. We caught it on the bulky old Nagra tape recorder.

Back to the real world of Canberra politics. I know bullshit is breakfast in the national capital. But this pious Bill Shorten Gonski tweet was really hard to stomach: “A Prime Minister in touch with regular people wouldn’t cut billions from schools, and a Prime Minister who does will not last long.” 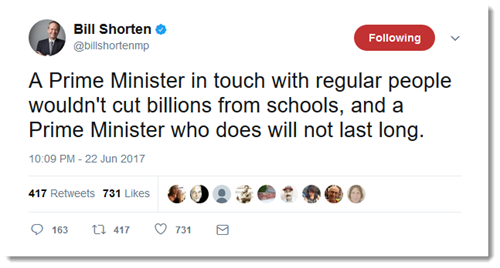 It prompted my reply: “Bill. Your own insiders are saying the deal the cross-benchers achieved with secret Greens help is great. You just can’t admit that.” 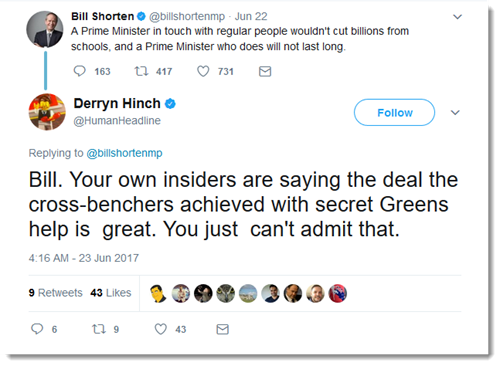 Penny Wong and Labor had George Brandis on Senate toast last week, and they blew it. They argued that the government was in disarray and forcing messy legislation through.

Senator George Brandis and Mitch Fifield were playing funny buggers to extend sitting hours to force a decision on Gonski, and Labor, quite legitimately, tore the government apart on cynically playing time games to sit late and filibuster Gonski through the upper house.

But Labor missed a doozy. I called a point of order. Why? Brandis put his ponderous notice of motion with points 1a and 3a but missed 2a. Sloppy. And nobody picked it up. Old subeditors never die.

Usual load of garbage, but seriously just go and join the Libs Derryn as you clearly never vote on the merits of any issue such as the dud education bill you just helped pass. Try reading a bit first and think about what you are doing.

Crikes – can we call this experiment over? The Senator would better spend his time on his day job.

Jeezus, first he thinks he’s Stephen Fry hosting a QI (in a repeat as they did that one already), then he’s playing it like we can’t tell that he’s jealous that Bill Shorten can do politics/flip-flop better than he can*, then he’s playing Gerard Henderson pendantically criticising over minor (if not imagined) slip ups.
I’d say he’d forgotten who he was if not for the story of fucking up a big opportunity.

*never calls Malcolm out for it though. Can’t tell if it’s favouritism or just that Malcy doesn’t do it well anymore.

I guess this is what happens when you elect a shock jock to be a Senator.
Not a great outcome for anyone.

Yeah that’s right – Dezza is on radio promising he knows big news on Ashby which was about to happen but he wouldn’t say what it was, and then nothing. Very odd.
If only he had a regularly published insiders column where he could explain that one!