Did the ACTU try to influence the Walkleys? ... return of the leather jacket ... heeeeeeere's Kevin ...

WTF is with the ACTU? In just over a month’s time, the inaugural Walkley award for reporting on industrial relations will be named, with reporters from Fairfax and The Australian vying for the title. According to the Walkley Foundation, the Helen O’Flynn and Alan Knight Award for Best Industrial Reporting recognises “outstanding journalism that captures the importance and the complexities of a robust industrial relations ecosystem for Australian workers and businesses”. It’s even got some big-name sponsors, including the University of Technology Sydney and the Australian Council of Trade Unions. When the finalists were announced, a tipster tells us the ACTU found itself in an awkward position: one of the finalists is The Age investigation into how workers covered by the Shop, Distributive and Allied Employees Association (SDA) were underpaid through deals negotiated by the union. The SDA is the largest private sector union — and one of the ACTU’s biggest affiliated unions — so we would love to have seen the reaction when the finalists, picked by an independent panel of judges with experience in industrial relations reporting, were announced.

Crikey hears from a tipster that a senior figure at the ACTU has gone so far as to contact a member of the Walkley advisory board about the finalists. Although the panel of judges chooses the finalists and recommends the winner, the Walkley advisory board makes the final decision. Our tipster says the ACTU was told to “back off”, but the approach by a financial sponsor was seen as alarming. The Walkley Foundation told us it hadn’t heard of such an approach, and directed us to its sponsorship policy, which states: “Sponsorship of The Walkley Foundation or of any, project, program or event will not entitle any sponsor to influence any decision of The Walkley Foundation.” The ACTU has not returned our calls.

Return of the leather jacket. Yesterday marked the return of one of the nostalgic faves of Australian politics watchers: Prime Minister Malcolm Turnbull’s leather jacket. While in the past the jacket has been a sign that Turnbull was ready to get eloquent on Q&A, these days it is more of a panic beacon when things aren’t going so well. 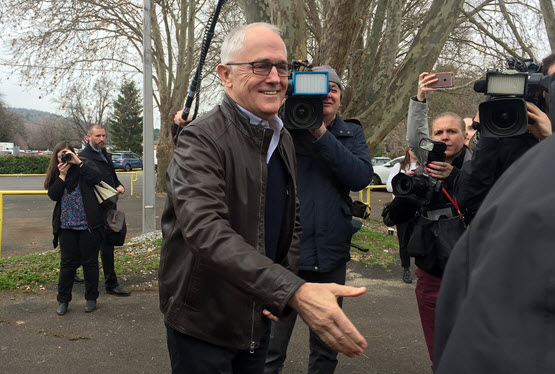 So when was the last time we saw the leather jacket? It’s been a while, and it’s a shame the PM doesn’t get more wear out of it. As far as we can tell, the last time it made an appearance was around a year ago — the dying weeks of last week’s election campaign. So, as we said, it’s a panic beacon.

Ruddmentum. Speaking of Turnbull’s troubles with his backbench, we are sure he is praying for a distraction from the infighting besieging the Liberals. Luckily for Turnbull, we have got word that it is coming — but he will have to wait until October for a real shitstorm to hit Labor, giving Turnbull a break from the headlines. Yesterday we reported that he had heard Pan Macmillan would be publishing an autobiography by former prime minister Kevin Rudd, but the company is still ducking our calls on confirming what’s going on. We do hear the book will be published in the last few months before Christmas, with all the promotional speaking events attached. So many opportunities for Ruddy to talk about how Julia Gillard was meant to be a good person and his views on Wayne Swan. Everyone will be in such a tizz they will barely remember Abbott and Turnbull. Well, Turnbull hopes so at least.

What terror? The Daily Telegraph is back on the Clover Moore hunt, this time because of a City of Sydney decision to install concrete bollards in public places as part of a bid to prevent terror attacks that could involve driving vehicles in pedestrian areas. According to the Tele:

“THE NSW Police Minister has lashed Sydney Lord Mayor Clover Moore for ­deciding to fill Martin Place with large concrete barriers to prevent a terrorist threat which authorities say does not even exist, according to latest intelligence.” 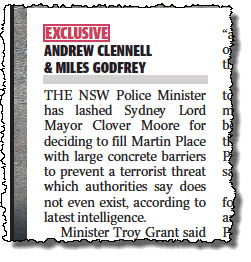 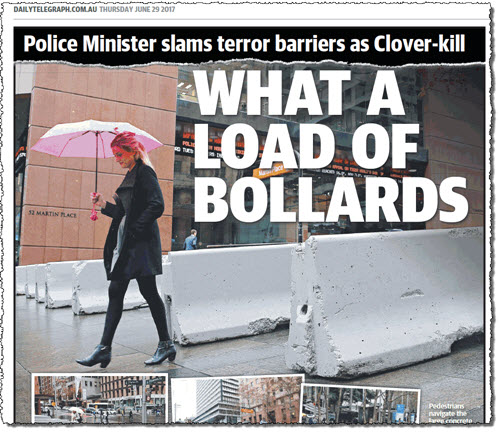 Compare the reaction to Melbourne, where concrete bollards have also been erected in the past few weeks — last week the Herald Sun reported that the bollards had been installed by the City of Melbourne, including a tweet from lord mayor Robert Doyle (a long-time Liberal) that they were necessary and would eventually be updated with a more aesthetically pleasing version. There were also quotes from Labor Police Minister Lisa Neville. Somehow there was no political outrage — not even a line on whether the government really was tough enough on crime (a favourite line from the Herald Sun). Sounds like anti-terror bollards are only a good idea when the person making the decision is a conservative.

Crikey Worm: terror plane plot thickens, marriage equality back on the agenda, and Mooch out

The return of the leather jacket is both a sign of panic, but also showing Malcontent is now in holiday mode and off to restore himself in the Hunter Valley.

Could you imagine the howls of anger from the Tele if, given recent history, some DH mowed down people in Martin Place and the council hadn’t put bollards in place. What a bunch of hypocrites. I hope we’re going to see bollards popping up in many places around town. The more the better.

Yes, but do they have to be so damned ugly?

I hope so, but I’ve seen these ‘temporary’ measures persist long past any reasonable time.

This is Clover Moore – they’d be screaming if she didn’t put bollards up.

Pity they couldn’t be placed across the doors at Holt St to prevent ingress.
Exit would be OK for the minions if they promised to reform and cease being mendacious myrmidons in future.

The usual shite as the Tele is plays both sides of the fence.