Abbott's six-point plan to stop the votes ... who is publishing Kevin Rudd? ... Petya virus in Australia ...

Abbott stakes his claim. Stop us if you have heard this one before, but former prime minister Tony Abbott is no longer sniping, he’s started all-out war with his successor Malcolm Turnbull, using his speech to the Institute of Public Affairs last night to launch “a plan to win the next election” on the homepage of his website. Of course he doesn’t say “my plan”, but he lets us fill in the gaps. The big headline is “let’s make Australia work again,” which shows just how much he loves one Donald Trump. His six points include things he can’t do without a referendum, like “reform the senate” and others that aren’t even policies like “celebrate Australia — don’t run it down”. The further you read, the more it sounds like a down-ticket candidate for One Nation soon to be dumped for a scandal. 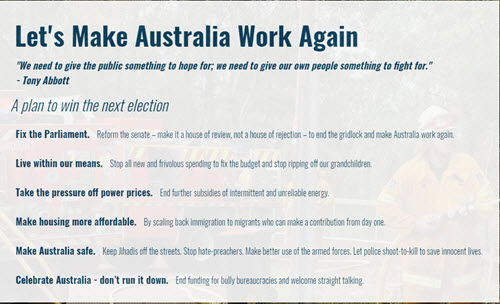 Tale as old as time. Speaking of former prime ministers who had a taste for revenge, rumours abound that Kevin Rudd is working on a book — an autobiography, in fact. Strewth‘s James Jeffrey rang around a handful of publishers last week to see which one would be taking on the task of deciding whether “ratfuckers” should be in a chapter title. Melbourne University Press, Penguin Random House Australia, and Hachette said it wouldn’t be them, while Harper Collins and Black Inc publishing hadn’t confirmed. We heard from a tipster that the money should be on Pan Macmillan to publish what is likely to be a very long memoir, impossible to read without hearing Rudd’s own voice in your head. That would mean he has bypassed Allen and Unwin, which published his children’s book Jasper and Abby, named after the family pets. We asked Pan Macmillan if they were publishing a book by Rudd, or even in talks with him, but we didn’t receive a response.

Petya in Australia? Chocolate manufacturer Cadbury is reportedly one of the Australian companies hit by the new ransomware virus known as Petya. A tipster tells us that major logistics company DHL had told Australian employees not to turn on their computers because of fears around the virus. A spokesperson told us this was not the case, and that she was in fact using her computer at the time. Know more? Is your company affected? Get in touch — you can stay anonymous if you wish.

Please like me. Baby-faced Senator James Paterson is using an unusual tactic to get more “likes” on Facebook, with a photo of himself appearing on The Project alongside host Waleed Aly used in a Facebook sponsored post. Broadcaster Aly is a favourite punching bag for many on the conservative side of politics — so does Paterson’s media team think his presence will help with getting more fans? Aly wrote a character reference for Richmond footballer Bachar Houli (as did the PM), which swayed last night’s AFL tribunal meeting, so maybe they are onto something. 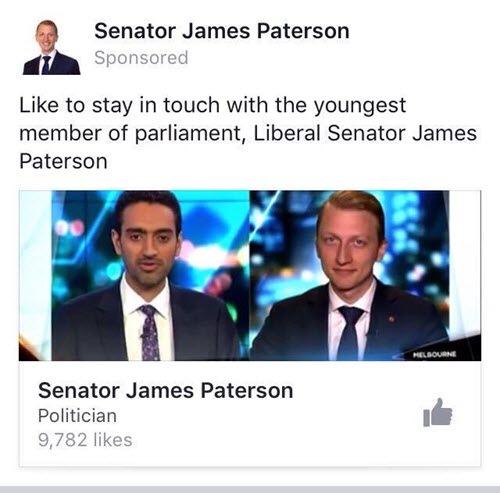 Manly men and their testosterone burgers

China 1: Beijing slams on the brakes

A replay of “Team ‘Straya” repeated again. Yeah, and it worked to well the last time.

Chortle – “..sounds like a down-ticket candidate for One Nation..” – which shows where he thinks his base is.
Nowhere.

One of Abbott’s slogans is six words – so sophisticated this time.