The census figures highlight a number of worrying demographic trends for the Coalition.

As if Malcolm Turnbull’s beleaguered government didn’t have enough to contend with, yet more cause for pessimism about its electoral prospects has arrived in the form of yesterday’s release of data from the 2016 census.

Most explicitly, the latest population numbers bring the Coalition one seat closer to defeat by all but confirming that the Australian Capital Territory will gain a third House of Representatives seat when the determination is officially made at the end of August.

Needless to say, any seat in the national capital is all but certain to be won by Labor, except in the event of a Coalition landslide that certainly doesn’t look to be in prospect at the moment.

The census figures also highlight a number of worrying demographic trends for the Coalition.

It isn’t news that the mining states of Queensland and Western Australia have experienced the slowest income growth since the previous census in 2012, but the census shows that the distribution within these states could almost have been designed to cause trouble for whichever party happened to be in government.

In Western Australia, incomes have held up tolerably well in the remote electorate of Durack, a safe Liberal seat that plays host to most of the state’s big resources projects.

Instead, the brunt of the downturn has been felt in Perth’s electorally sensitive eastern and south-eastern suburbs, reflecting the role played by high-paying fly-in fly-out work at the peak of the mining boom.

It’s a very different story on the other side of the country, where the mining regions of central Queensland encompass many more cities and towns than Western Australia’s, and whose economies have been hit hard by the downturn.

From Gladstone in the south to Townsville in the north, a succession of marginal seats — Flynn, Capricornia, Dawson and Herbert — are in all the bottom five electorates in the country when ranked by income growth between the two censuses (Flynn being unique in recording a negative result). 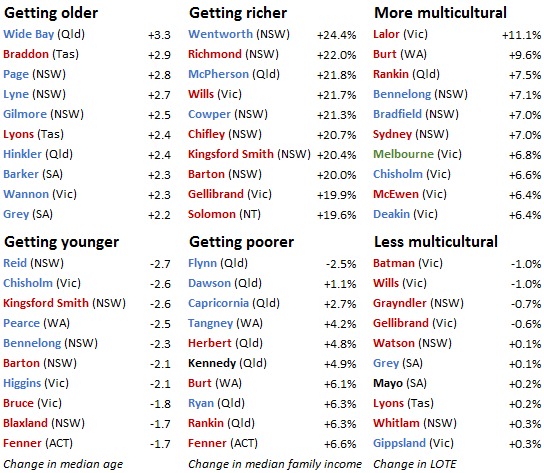 To some extent, the impact of these developments has already played out at the federal election last July.

The Coalition’s single worst result in swing terms was in the south-eastern Perth seat of Burt, which ranked seventh bottom for income growth (although rapid urban development has made the area more favourable for Labor, in particular by bringing in an influx of non-English speakers — which is also indicated in the relevant table above).

In Queensland, Labor was finally able to knock over the Townsville-based seat of Herbert, which had eluded it at every election since 1996.

However, a number of other Coalition members escaped with narrow margins: 2.1% for Ken Wyatt in the eastern Perth seat of Hasluck, 3.6% for Steve Irons in neighbouring Swan, 1.0% and 0.6% for Ken O’Dowd and Michelle Landry in the central Queensland seats of Flynn and Capricornia, and 3.3% for George Christensen in Dawson (perhaps explaining the latter’s seemingly out-of-character aversion to reduced penalty rates).

If there’s any mileage left in the trend to Labor in these areas — and the Western Australian state election result certainly suggests as much — it becomes very difficult to imagine what a Coalition majority might look like.

However, it’s not all good news for Labor, with other demographic trends suggesting the party will face growing pressure from the Greens, despite their stagnant electoral support in recent years.

The areas of Sydney and Melbourne where the Greens pose the greatest threat are characterised not just by their concentrations of young voters, but also by migrant communities that have so often allowed Labor to ward off their challenge.

However, the census data indicates that the latter kind of voter is increasingly being priced out of inner urban markets — albeit that the trend sharply reverses in the immediate orbit of the central business districts, which are particularly notable for their growing Chinese populations.

The Greens targets of Batman and Wills in Melbourne and Grayndler in Sydney rate as three out of only four electorates where the proportion of non-English speakers actually declined between 2012 and 2016.

While none cracks the top 10, they also land in the top quartile for declining median age, and do so off an already youthful base.

Labor hung on precariously in Batman and Wills last year, and are probably safe in Grayndler for as long as Anthony Albanese is holding the fort.

But in the long term, the party’s prognosis in the inner cities would seem to be rather poor — unless it fancies following Jeremy Corbyn’s example with a young-baiting switch to the left.

The Greens are kindly doing their best to give seats back to Labor by quarrelling among themselves. When will political parties realise that no matter how good they may think their policies are, internal quarrelling is death? Especially after the demise of the Australian Democrats.

You say ‘quarreling’ but another might say “robust discussion” but, unless they remain Green rather than the puce the Black Wriggle is aiming for, then they deserve to lose.
That why Labor lost so many voters – no point of difference with the other neolib ‘side’.