Whoopsies, The Australian has made quite the clanger about Ten's chairman -- it could be a very costly mistake.

Today in Media Files, The Australian has apologised for yesterday’s Ten clanger by media editor Darren Davidson, and three CNN investigative journalists have resigned over a story about Trump officials’ Russia links.

One all (plus an own goal) in The Australian. Page 2 of today’s Australian was a tale of (potentially) two defamation actions.

First up was the headline “MP drops defamation action” by legal affairs editor Chris Merritt. NSW Labor MP Shaoquett Moselmane had lodged a defamation suit against the Oz, claiming an article by reporter Sharri Markson depicted him as an anti-Semitic hypocrite. He has withdrawn the claim before the case was due to be heard in the NSW Supreme Court. The Oz reports that the parties will pay their own costs.

Markson and the Oz‘s publisher Nationwide News denied the imputations and defended the article on the grounds it was Markson’s honest opinion, protected by qualified privilege, and was a fair report.

But there was no byline or authorship on the second item, headlined “Apology to David Gordon and Network Ten board“. The broad apology referred to yesterday’s lead in The Australian‘s media section, which said Ten chairman David Gordon had sold 88% of his shareholding before the network went into voluntary administration. In coming to this conclusion, the article had failed to take into account Ten’s 10-for-one consolidation of shares in January, 2016 — Gordon had actually acquired shares over the time period:

“The Australian acknowledges that Mr Gordon did not sell any shares in the company and in fact his shareholding increased in the period before the company was placed into administration. The reduction in the number of shares held was due to a 10:1 share consolidation applying to all shareholders, which took effect on January 25 last year. The Australian acknowledges that its statement was inaccurate and untrue and apologises to Mr Gordon.”

The apology also covered the assertion that Gordon and the board had failed to conduct scenario modelling on cash-flow analysis, and were unprepared when major shareholders Lachlan Murdoch, Bruce Gordon and James Packer decided not to renew their debt guarantee: “The Australian also acknowledges that both of these statements were inaccurate and untrue and apologises to Mr Gordon and the board.”

The author of the offending article was The Australian‘s media editor Darren “Lurch” Davidson. David Gordon has engaged the services of lawyer Leon Zwier of Melbourne firm Arnold Bloch Leibler. This will make it worth watching in coming days to see if the apology satisfies Gordon. You have to ask, with an apology so grovelling, how much money will News Corp Australia be paying to Gordon and the rest of the Ten board?

But here’s a question that reflects badly on the Oz and its editors. Putting to one side the inaccuracy of the David Gordon story, why didn’t alarm bells ring at The Australian? Davidson was accusing Peter Tonagh, the Foxtel CEO (Foxtel owned 13.8% of Ten) and a much higher-ranked News Corp trooper (who also sits on the Ten board) of having, as the apology put it, “failed to conduct scenario modelling on cashflow analysis and were caught unprepared when the three main shareholders decided not to back a financial restructuring of the broadcaster”.

Did no one at the Oz understand what Lurch was saying in his story — that Tonagh was a bit of a dud (which he clearly isn’t, because he is still running Foxtel)? — Glenn Dyer

News getting into the mortgage business. Did you know that News Corp, one of the Murdoch family’s main companies, is going into the $400 billion-a-year mortgage market for Australian home owners? The move will create a further conflict of interest for the property, business and economic writers employed on News’ various papers throughout Australia. REA Group, News’ 61%-owned real estate website (and the only reason why the News Corp share price hasn’t collapsed) revealed on Tuesday morning that it was buying 80.3% of mortgage broker Smartline for $67 million, with the option to buy the remaining 19.7% after three years. As part of the deal, News is getting into bed with the National Australia Bank.

The move is a further sign that REA is searching for more revenue sources and believes the Australian real estate listings market has stopped growing now that price growth is slackening. It is also an attempt to offer more services than its bitter rival, Fairfax Media’s Domain, which is the big attraction in the takeover talk surrounding Fairfax.

The deal will be done by the end of July, meaning that from then on every story that appears in News Corp papers on home lending, debts, interest rates and monetary policy, house prices and demand by will have to be viewed through the prism of possible conflicts with what REA and Smartline (and NAB) might want to see. News Corp will of course reject this, but we have seen conflicts in stories in News Corp papers on the Ten Network, Foxtel and sports rights, pay TV generally, media law, not to mention the way the papers bleat about free speech, then deny it to others.  — Glenn Dyer

CNN reporters resign over Russia-Trump story. Three CNN journalists have resigned over an online story linking a Russian investment fund to officials in US President Donald Trump’s administration. The story by the network’s new investigative unit was picked up and scrutinised by right-wing outlet Breitbart and has now been replaced with an editor’s note. The note apologises to Trump ally Anthony Scaramucci, who was named in the article and accepted the apology on Twitter.

CNN reports that the story, relying on a single anonymous source, did not go through the usual editorial processes — it should have been reviewed by fact-checkers, journalism standards experts and lawyers before it was published.

The executive editor in charge of the unit, Lex Haris, reporter Thomas Frank and editor Eric Lichtblau have all left over the story.

One is not amused. Some awkward headline and picture placement in yesterday’s Times: 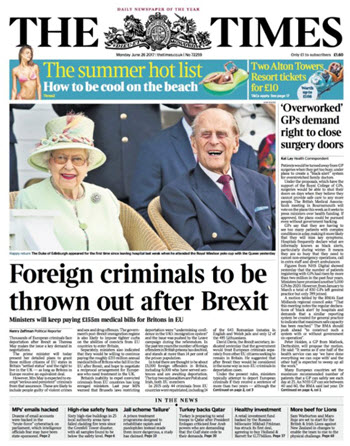 US gong for Seven’s Mike Amor. Seven’s US bureau chief Mike Amor has been handed a gong by the LA Press Club as television journalist of the year. Amor submitted three stories — one about the death of Chris Lane, one about a Cuban town called Australia, and a compilation of his coverage of the Orlando shooting.

The enthusiastic judges’ comment said: “Compelling storytelling — very emotional! All stories were interesting to the viewer. Great natural sounds, writing, and editing! Two thumbs up on each story!”

Glenn Dyer’s TV ratings. The retirement villages story on Four Corners last night and in the Fairfax papers could have been tackled by any of the opposition media, especially 60 Minutes and Sunday Night or ACA, but it is clear many ordinary Australians don’t trust them on stories like this and approached Fairfax and the ABC. Australians voted with the remotes — Four Corners had 1.341 million national viewers — 954,000 in the metros and 387,000 in regional Australia. Four Corners helped the ABC into third spot in the metro channels, pushing Ten to fourth. Four Corners won the timeslot easily (and was a top 10 program nationally and in the metros), beating the weak offering on Nine and Seven and Ten’s MasterChef and Have You been Paying Attention, which were the commercial networks’ best (not in terms of ratings) programs last night.

Well, I have become a fan of Wanted on Channel 7. They had a huge disadvantage, being up against ABC’s strong current affairs night, but I am quite cheesed 7 didn’t fund them to film in Australia. Although it was lovely to see NZ, and some kiwis. So more of it, please Channel 7, and pay enough for them!