Who are you (who who, who who)? The Australian Bureau of Statistics is crowing today that its controversial 2016 census was not that bad because the undercount rate (the percentage of people not counted who should have been) was about in line with the 2011 rate. But what was not said is that there was a significant increase in people not completely filling out the forms.

People seemed more keen to leave their name off than swear at the bureau, though. The report also states that less than 1% sent back a name that was not a valid response, “such as curse words, titles, or phrases that demonstrated a valid name had not been provided”.

“The move indicates that Canberra is now running ahead with what the FBI has dubbed ‘going dark’ for several years now. This is the notion that with the advent of widespread, easy-to-use strong encryption on smartphones and other devices, law enforcement has been hindered. Many experts say, however, that any method that would allow the government access even during certain situations would weaken overall security for everyone.”

And Ars Technica is not the only overseas tech website to pick up on Brandis’ hopes and dreams, as Bernard Keane writes today. So what will the world stage make of our bumbling AG? We wait with bated breath.

Have you heard the one about the fox and the rain gauge? We couldn’t help but share this little vignette from Dalyup, near Esperance in Western Australia, reported by the local ABC. A farmer suspects that a local fox was “contributing” to the rain gauge on his property, which collects data to be sent to the Bureau of Meteorology. Tom Murray said he was investigating why his gauge was showing liquid when it had been a dry few weeks. “I didn’t think we’d had quite that much, so I looked a little bit closer and it actually had a little bit of colour in it, so I got a bit suspicious,” he told the ABC. “My wine-making background came to the fore and I thought I needed to apply the sniff test and it was decidedly foxy.”

The local office tried to catch the fox in the act, and when there was no evidence forthcoming, the farmer provided a re-creation. 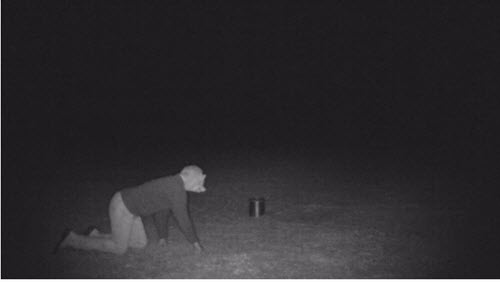 What to make of Brandis on the web? A Garden Orb Weaver?

Mr Toad on the world stage – “how embarrassment”.