Where has Our Gina gone wrong? Mining magnate Gina Rinehart has had a rough time of it recently. Her near $200 million stake in the Ten Network is practically worthless, and according to media reports, Rinehart’s $13 billion Roy Hill iron ore mine in Western Australia (she owns 70%) is still suffering teething problems. It is still to reach its rated production rate of 55 million tonnes a year, despite and promises in late 2016 that this figure would be hit early 2017. The mine started in February 2016. Roy Hill CEO Barry Fitzgerald said late last year: “But we will certainly achieve a 55 million tonnes annualised rate early in the New Year.” We’re yet to see it.

A Chinese mining seminar was told on Thursday that Roy Hill was expecting to ship 16 million tonnes of iron ore in the six months to this Friday. Sales director Cao Chengjie blamed “unexpected difficulties encountered during production” for the failure to meet expectations at an industry conference in the Chinese city of Zhengzhou on Thursday, according to the Metal Bulletin. That target might have been disclosed to the Chinese iron ore buyers and steel mills, but it hasn’t been made public in Australia.

Penalising employees does not help employment. You’d be aware of the terrible burden that Australia’s hospitality sector is labouring under with penalty rates, that massive burden on the sector that prevents them from employing more people? Some relief is on the way, of course — the Fair Work Commission in its wisdom decided to cut Sunday and public holiday penalty rates for workers in the hospitality and retail sectors. And not a moment too soon — the hospitality sector is critically endangered. In detailed employment data released by the Australian Bureau of Statistics last week for the May quarter, employment in the food and beverage sub-sector plunged to 777,000 workers. Well, by “plunged” we actually mean “surged” — that figure was a 3.7% increase on the February quarter and a 4.6% rise on the corresponding quarter in 2016. And that’s an 18% increase from the corresponding quarter five years ago. At nearly 6.4% of the entire workforce, food and beverage service employs a greater proportion of Australians than at any point in history. But penalty rates, etc, etc.

In passing the legislation last week, Parliament delayed the introduction of the new scheme by a year until July 1, 2018, in order to conduct a review of all the proposals, which means that a better review of how the scheme would operate will now be done.

No papering over the cracks at DHS. You would think, given recent events, that the Department of Human Services wouldn’t mind less reliance on technology. But we hear that Centrelink is prioritising claims for payments filled out online ahead of those filled out on paper forms. A tipster told us a message came down to staff from senior levels in the department to not work on paper claims at all for seven days to “teach customers to use electronic means”.

We asked the department about this, and a spokesperson told us:

“There has been no directive to staff to stop processing paper claims. Claims are prioritised by date of receipt, unless the department is made aware of any extenuating issues, such as severe financial hardship. Obviously those claims that are lodged online with all the information required are available for processing sooner than paper claims that arrive through the mail.”

Get down with the kids. The most common comparison for the Liberals’ new website The Fair Go has been progressive activist group GetUp. But as a party publication that offers only opinion pieces, endorsements of Coalition policy, and no actual campaigns as of yet, it’s actually far closer to the Labor Herald (remember how well that went?). Except way more fun! Ms Tips was intrigued by the article “Who’s your grand-daddy?” — which seems to be attempting to connect with young people by using cool contractions, words like “woke” and comparing sections of society to housemates who don’t pull their weight. But we can’t begin to figure who the supposed audience is for the unforgettable (believe us, we tried) and borderline incomprehensible phrase “Grand-Daddy Corbyn and Sanders are scruffier and less sex than a daddy.” 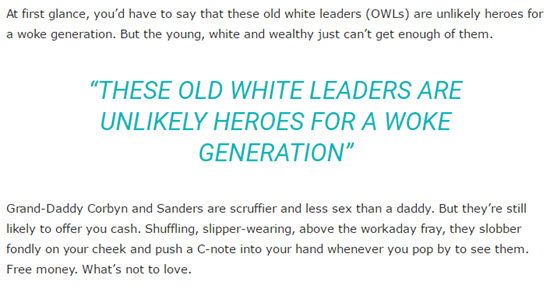 After Malcolm Turnbull’s Midwinter Ball speech, Fair Go seems to represent a Coalition move towards bringing the larfs. Just look at “Dear Bob”. It’s a fake agony aunt column, so far featuring a single letter from “always the bridesmaid”, who appears to have a bizarrely convoluted problem referring to the apparent disunity between Labor infrastructure spokesman Anthony Albanese and Opposition Leader Bill Shorten. The letter writer is mocked for having learnt to “play records on two gramophones simultaneously” in an attempt to woo younger members of the “selection panel” (selection panel, in this tortuous exercise, meaning voters). 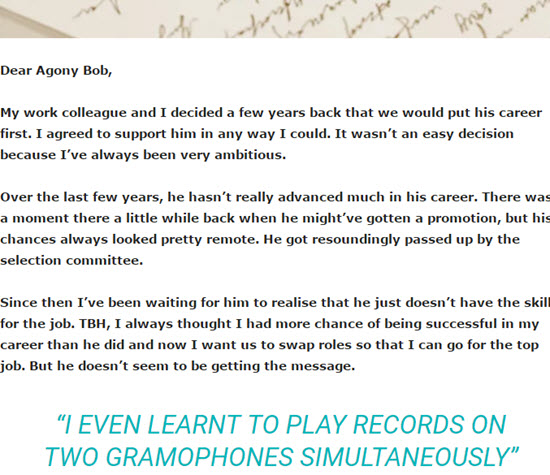 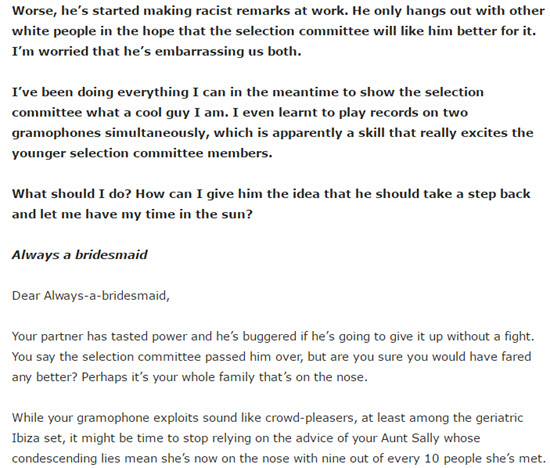 We completely agree — what could be more embarrassing than politicians spouting faux trendy affectations in a completely tone-deaf attempt to woo younger voters?

The LNP Fair Go thing is a scream, but for reasons other than what the writers intended. I actually read the Agony Aunt piece this morning and absolutely didn’t get that it was supposed to be about Albo and Shorten. Thanks for the info that it was – the bit was hurting my head. The entire piece seemed a bit demented if you ask me. At least now I can see where they were headed. A big swing and a miss.

Other than that, if this stupid thing is supposed to head off Get-up then the Torys are going to be sorely disappointed. I wonder if George Brandis will stop sulking about Get Up now that they have the perfect antidote?

I hear all the comments had to go on Fair Go after a deluge of anti government sentiment swamped the hapless moderators. In fact the planning of the site was so poorly conducted all visitors are now forced to subscribe to read anything and comments have been turned off on all articles permanently. Dissenters clearly do not get a fair go under this junta.
Just like everything else the Coalition touch it’s turned to shite faster than the NBN.

I completely missed the Albo/Shortcoming metaphor – I thought that it was some cack handed portrait of two gay blokes in a civil union.

Dear Agony Bob,
Our cousin writes funny stuff for a ‘great metropolitan newspaper’, but his editor leaves all the funny bits out….?
And our cousins Greg, Alan and Michael have been caught trying to bully Victoria Court.
What can we do?
Libby and Errol
(The Too Wrights)

Dear Libby/Errol
Have you thought of joining our Platinum Bernardsi Party – you’d look at home in brown …. look at Peter.
But for now
Hunt the Tudge, Sukkas.