A new study sheds light on how much murder has fallen in Australia in recent decades, and why that trend is set to continue.

New analysis from the Australian Institute of Criminology has confirmed that homicide in Australia has fallen significantly since the 1990s, including domestic homicide. The report, by Willow Bryant and Samantha Bricknell, looks at national data from 1989-90 to 2013-14.

During that period, the number of homicides has fallen from over 300 a year — the level homicide was at for much of the 1990s — to around 240-250 at the moment. Adjusted for population, that means a significant fall, from around 1.8 murders per 100,000 population each year to 1.0 currently. If Australians were murdered at the same rate as in 1990, around 430 people would be killed each year. 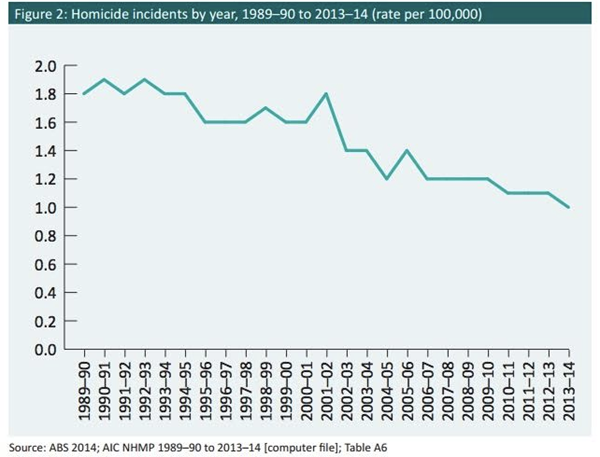 Domestic homicide was the most prevalent type of homicide in the period 2012-14 (the most recent data, which the report also examines), at 41%; another 27% was categorised as “acquaintance homicide”; 63% of domestic homicides were intimate partner murders; another 15% were murders of children. The overall number of domestic homicides has fallen 13% since 1989; intimate partner killings have fallen 24%. And while assigning a motive is often problematic and may be inconsistent across jurisdictions, the most prevalent reason across all murders, not just domestic homicides, is domestic arguments (16%), other kinds of arguments (16% jointly), money and drugs (both 6%), and various kinds of controlling behaviours — jealousy (5%), revenge (4%) and termination of a relationship (4%).

Despite the prevalence of domestic homicide, men dominate homicide victims as well as offenders: 64% of all homicide victims in the 2012-14 period were men. The decline in male victimisation since 1989-90 has been more pronounced than that of females; the latter has levelled off at 0.8 per 100,000 in recent years while that of males has continued to decline, and is now at 1.3. Men make up 21% of intimate partner homicide victims and 35% of all domestic violence victims. Men also make up 88% of perpetrators of all homicides; their mean age is surprisingly close to that of female offenders (34.2 years to 34.4 years), whereas female victims are slightly older than male victims, 38.3 years to 37.2 years. Forty seven per cent of offenders had some form of criminal history, although the figure may well be much higher due to incomplete records; 23% of offenders had a previous assault conviction (excluding another 3% with a sexual assault history). A fifth of all perpetrators had a history of domestic violence, even if the murder they committed was not in a domestic setting. 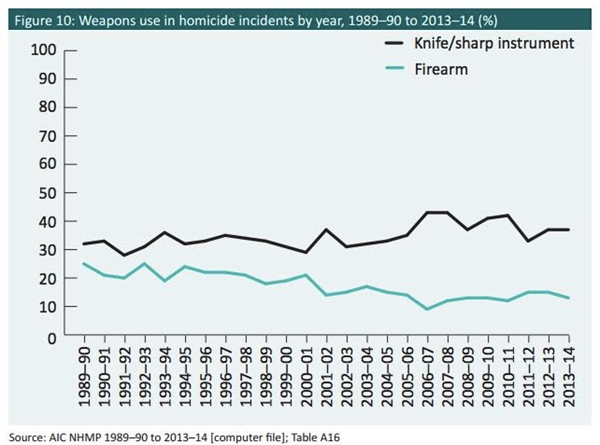 At 15%, indigenous Australians were significantly over-represented among victims; women make up a greater proportion of indigenous victims — 41%; 62% of all indigenous victims are killed in domestic homicides (the non-indigenous figure is 38%). The indigenous homicide rate has also fallen significantly, from above 12 per 100,000 in 1989 to 4.9 in 2013-14 — but that’s still more than five times the non-indigenous rate. Indigenous people are also overrepresented as homicide perpetrators, forming 17% of offenders — although there’s been a massive fall in the male indigenous offending rate per 100,000 population — by more than 70%.

Why are up to 190 lives being spared this year compared to the time when Bob Hawke was prime minister? The first significant falls in the homicide rate came before John Howard’s gun laws, so the relationship between the decline and gun laws isn’t clear-cut. What does seem to be clear is that there was no spike in knife homicides after those gun laws were introduced, suggesting arguments from gun advocates that murderers would simply use another weapon wasn’t borne out.

Separate data suggests that once the AIC data is updated, it will show a further fall. While Victorian homicide statistics are stable, NSW Bureau of Crime Statistics and Research data shows homicide incidents halving in that state since the end of the 1990s — and after plateauing in the late 2000s and early part of this decade, they fell significantly in 2015 and 2016, although more strongly outside Sydney than within it. Adjusted for population growth and the size of New South Wales (between a quarter and a third of all homicides take place in that state), that means the welcome fall in murder will continue.

Interesting. Improved gun laws must have had some affect in containing the homicide rate, one would assume.

I also wonder if the removal of lead from petrol might have had an impact. There’s a plausible theory that the removal of lead from petrol in the USA correlated strongly with a decrease in violent crime, because high lead levels in blood had been linked with aggressive behaviour and faulty reasoning abilities. I believe lead was progressively phased out in Australian petrol from the 1990s, so perhaps there was a corresponding effect here as well.

Similar trends occur globally (for crime more generally) – and have done so for about three decades, with the only persistent rise in crime being among the over-65 cohort. Among the under-25s the fall has been sharper than average.
Lead exposure has only accounted for 1-4% of variation in cognitive ability recently, according to WHO and CDC… about a tenth of the impact that societal and parenting changes has. So maybe thrashing our kids with a belt (less popular now) wasn’t the panacea after all.

That’s interesting about the over 65s.
Does it take into account our greater longevity, ie a bigger proportion of the population in this age group?

The unfortunate thing about lead damage to the brains of children is that the effects don’t cease or ameliorate when the lead ingestion ceases.
The effect is permanent. Which could mean that we will be seeing ‘legacy’ acts for a few more years yet in the crime stats, given that impulse control was one of the first functions lead corrupted, closely followed by the inability to process new information.
In fact, it sounds like a lot of pollies are victims.