Yes, the Daily Mail rewrites other journalists' stories as a fundamental part of its business model. And no, it is not sorry.

Today in Media Files, Daily Mail Australia has told journalist Ginger Gorman that ripping off her stories is just fair use, The Courier-Mail has finally found Schapelle, and the SA government is trying its hand at news.

Daily Mail says its rip-offs are fair dealing. Freelance journalist Ginger Gorman, who earlier this week went after Daily Mail Australia for ripping off her story about an online troll, has sent the website an invoice for two stories she says it has stolen. The Mail responded in legalese, telling Gorman there was “no copyright in an idea”, and that the site could rely on a fair dealing legal defence under the Copyright Act.

“Our journalists are free to follow articles in the media and, indeed, this practice is extremely common in the world of online journalism,” the email read.

Rather than paying for Gorman’s work, the email offered to make a donation to the Suicide Call Back Service, “as a gesture of goodwill and in recognition of the important work it does on the issue of trolling”.

Gorman told Crikey this morning that the invoice was not about the money. “It’s a political statement about the multitude of macro and micro damages caused when journalists continually cannibalise the original work of other journalists,” she said.

She said some people she has approached had refused to speak with her because they know her work is rewritten by Daily Mail Australia with salacious headlines. “So what does it mean if ethical journalists can on longer hold power to account because of this behaviour? How do freelancers like me continue to tell important untold stories that are in the public interest? And how do we survive financially?

“To me, plagiarism like this has very severe implications for an industry that is already in trouble. It also has massive implications for democracy as a whole. Ask yourself this: which crucial stories will never be told if this behaviour continues?”

Gorman previously had a go at the Mail for ripping off her story about mothers sexually abusing their children. She wrote at the time that within hours, a story she’d spent weeks working on had been republished with other journalists’ bylines.

How to report on Schapelle. Australia’s favourite drug smuggler Schapelle Corby is back, but she is yet to speak to the media. What are journos to do when she’s nowhere to be seen? Well, luckily Corby has an Instagram account, so when she ended up in hospital with either a broken knee or broken ankle or maybe both (it’s hard to tell from the hashtags), there was finally something new to say. For the first time since her return, one of the papers had a picture of Corby on home soil, on crutches at the Gold Coast’s John Flynn Private Hospital, published in The Courier-Mail today (accompanied by a comprehensive wrap of recent Instagram posts). 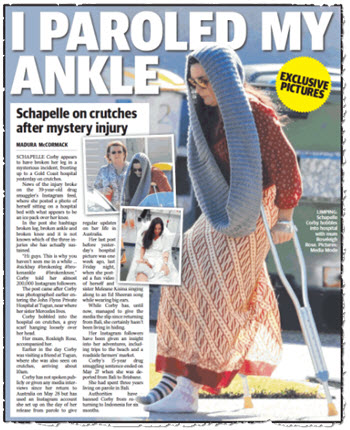 SA government’s breaking news. The South Australian government has given the news business a go in an attempt to control the message around its budget, announced yesterday. Instead of leaving it to the actual media to report on what was in the budget, the Labor government produced and handed out its own newspaper, called The Express. 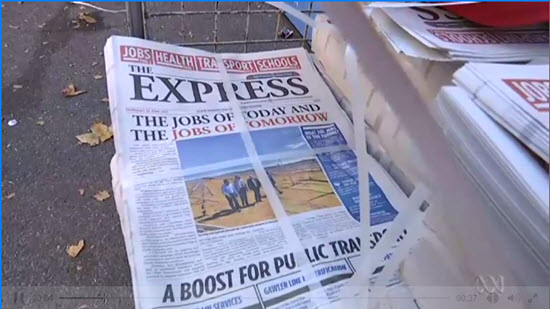 The front page had a decidedly less engaging and creative spin than SA’s daily paper, The Advertiser: 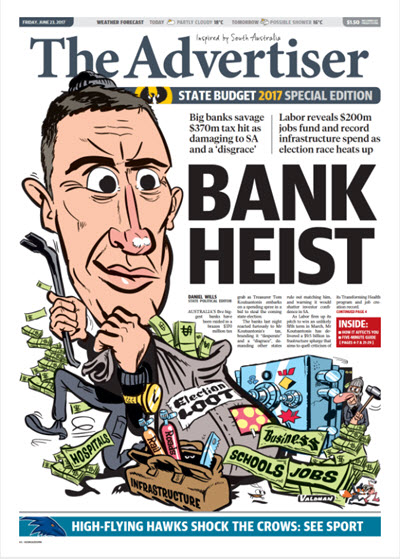 The negatives of photo digitisation. Photos from Fairfax’s archives that were caught up in a legal drama in the US could be returned to Australia after they were bought from bankruptcy lawyers. Daniel Miller, of Duncan Miller Gallery, bought the collection and is reportedly selling the copies back to Australian museums, including some cricket photos to the Sir Donald Bradman museum in Bowral, NSW.

Fairfax newspapers in Australia and New Zealand had sent hard copies of file photos to be digitised at Rogers Photo Agency in Arkansas in 2013, just months before the company was raided by the FBI in a fraud investigation. Earlier this year, owner John Rogers pleaded guilty to a fraud charge. Rogers faces up to 20 years in prison, and he will be sentenced in September.

A Fairfax spokesman said all negatives had stayed in Australia, and all the photos sent had now been digitised in stages both before and after Rogers Photo Agency went into administration. The copyright and negatives for the pictures still belong to Fairfax.

“We’re pleased the SMH photo archives have been successfully digitised, returned and preserved in perpetuity. Under our agreement with the people who completed this work, the hard copy photos belong to them,” he said.

Ten for sale. Administrators KordaMentha have gone back to basics with their administration of the troubled Ten Network, spruiking investment in the company with an ad in The Australian yesterday, describing it as a “rare opportunity to recapitalise or acquire an iconic Australian free to air broadcaster listed on the ASX”. 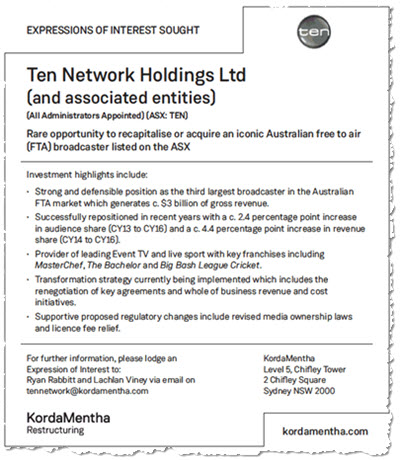 Ten went into voluntary administration earlier this month after two of its major shareholders, Lachlan Murdoch and Bruce Gordon, refused to guarantee a new loan.

Glenn Dyer’s TV Ratings. A weak night. Seven relied on the AFL game to get home — like the Hawks got home ahead of Adelaide. The game managed 773,000 viewers nationally on Seven and 7mate. Tonight it’s the Swannies v the Bombers — after last night, no result would be a surprise. The NRL runs around in a post-Origin stupor this weekend, starting tonight.

Masterchef was a highlight for Ten with 1.11 million and was the most watched non-news program, although I don’t think Heston does it for people on MCA. And that was it for an essentially boring Thursday night.

Where do we go to “borrow” Daily Mail property?

Crikey, your readers don’t give a toss about Schapelle Corby or the reporting/non-reporting of her adventures/misadventures.

Please don’t abuse your subscriber base with this type of dross – it is not what attracts us to Crikey & has the potential to repel.

We’re actually different to your average Curry or Maul devotee…..
I’m surprised they didn’t go with “ROLLED ANOTHER JOINT!”?

To be fair, it is the Media segment and one might generously read it as superior tsk-tsk at the C/M.
Generously. And disingenuously.