The government is on the edge of a win with Gonski, and the Centrelink robo-debt system has been criticised as doomed to fail. It's the news you need to know, by Sally Whyte and Max Chalmers.

The vote hasn’t happened yet, but the government has reached a deal on its Gonski 2.0 legislation, promising to spend more money over six years instead of 10 to gain the 12 crossbench votes required. After days of division, the Greens said they couldn’t vote for the legislation, despite the government meeting their demands.

Education Minister Simon Birmingham has got support from Nick Xenophon and his senators, agreeing to a an independent body that will ­review the socio-economic status model. The deal is now worth $24 billion over 10 years.

Despite a concession given to the Catholic school sector — an extra year to get prepared for the changes — Catholic Education Melbourne executive director Stephen Elder is quoted in The Australian today saying “This shows the continuing disrespect for a sector that educates one in four in students in this country”.

REPORT: CENTRELINK ROBO-DEBT SHOULD BE SUSPENDED

The government’s controversial automated debt recovery system was “so flawed it was set up to fail”, a Senate committee has found. The program, which used Centrelink recipients’ tax return data to calculate often incorrect debts, was slammed by the mostly Labor and Green committee, with Greens Senator Rachel Siewart saying: “The rest of the committee came away from this deeply distressed and concerned about how people have been affected by this.”

The committee has called for the program to be suspended until “a fundamental lack of procedural fairness” is resolved.

A dissenting report from government MPs on the committee did acknowledge problems with the program: “It has been widely acknowledged by the Government that the initial rollout should have received more robust planning and consideration of the impact and operation of increasingly moving to digital engagement.”

“These kids have a right to an education by all means, but if there is a number of them these children should actually go into a special classroom, looked after and given that special attention.” One Nation leader Pauline Hanson told the Senate yesterday that students with autism and other disabilities should be separated from other children, because their special needs distract teachers.

“Most of the time the teacher spends so much time on them they forget about the child who … wants to go ahead in leaps and bounds in their education, but are held back by those because the teachers spend time with them.”

The comments have been widely condemned, from Opposition Leader Bill Shorten and Greens Senator Sarah Hanson-Young to leaders in the education and disability sectors. The comments were made as part of the debate over the government’s education funding reforms.

Disability advocate Craig Wallace told the ABC that evidence contradicts Hanson’s claims: “What the evidence does tell us is that students with a disability perform much worse when they are put away in segregated settings and denied the benefits of a mainstream face-to-face education.” 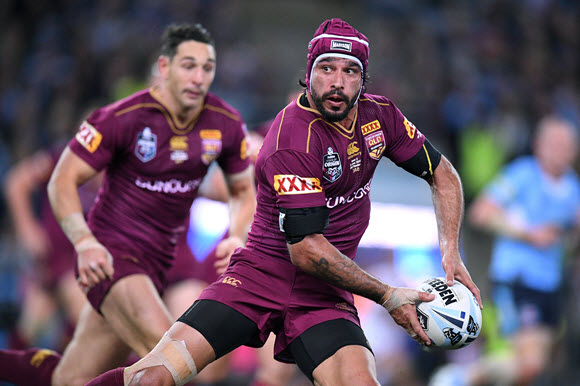 “I think it’s the dumbest half of football NSW have played,” said NSW legend Andrew Johns after Queensland clawed back from being down 16-6 at half time in last night’s second State of Origin match to win 18-16. Jonathan Thurston (pictured) played a starring role for the Maroons in what is likely to be his last Origin match, as he carried a shoulder injury throughout the night.

“Johnathan Thurston, his performance tonight was so courageous. I guarantee he’ll be headed for an operation in the next couple of days,” Johns said. The series will be decided in Brisbane next month.

Canberra: It’s the last sitting day until the winter recess and the Senate is scheduled to sit until midnight as the government attempts to make headway through its legislative agenda. After a day of negotiations yesterday, the Coalition will be looking for a vote on Gonski 2.0, and will also be pushing for a deal on media reform.

Adelaide: The South Australian government is set to hand down its budget.

Darwin: The royal commission into juvenile detention in the Northern Territory continues hearings. Yesterday the commission heard that Western ideas about family trees taking precedent over Aboriginal kinship systems had a detrimental effect on children removed from their families.

Melbourne: Former prime minister John Howard will speak at an Asialink event on the topic “What can we do? Australia’s role in contributing to regional peace and security in a period of major political and economic change”.

Greens and Labor put kids last with their vote against Gonski 2.0 — Phillip Coorey (Australian Financial Review $): “At the start the leader Richard Di Natale and education spokeswoman Sarah Hanson-Young wanted to do a deal. That was until the Australian Education Union got its hooks in and started making threats to the Greens who count teachers among their key supporters. The party split, with senators on the left including Lee Rhiannon and lower house MP Adam Bandt fighting any deal with the Coalition.”

Turnbull parts with funds but political cost greater — Dennis Shanahan (The Australian $): “Catholic school leaders are using advertising, robo-calls to homes and old-fashioned canteen and pulpit talk to defy the government and declare fees will rise at poorer systemic schools.”

The texts that could cost three government ministers their jobs — Peter Martin (The Age): “What infuriated the judges was that they hadn’t yet made a decision. The minister’s texts, amplified through The Australian, could be seen as an attempt to influence their decision. Much worse, they ran the risk of being damned whether they took account of them or not.”

Otto Warmbier’s death underlines plight of thousands of North Koreans — Michael Kirby (Sydney Morning Herald): “North Korea is a land of ceaseless propaganda. Of torture and inhuman treatment. Of arbitrary arrest and detention. Of public executions to which school children are brought to watch and to learn what happens to state enemies.”

The Republican party has won a hotly contested Congressional race in Georgia, with Karen Handel overcoming Democrat Jon Ossoff by a 52-48 margin.  In a usually safe red district, the special election was seen as a test of how Republicans will fare under Donald Trump, and both sides poured millions of dollars into the fight.

That’s the approximate number of princes and princesses thought to be in the Saudi royal family. But they all fall behind 31-year-old Prince Mohammed bin Salman, who has been named the new heir to the throne, replacing his cousin.

The Taliban has released a video of two captives, including Australian Timothy Weekes. Along with American Kevin King, Weekes was captured while teaching at the American University of Afghanistan in Kabul. He said he was being treated well and appealed to Australian authorities to help secure his release. — The Guardian

Uber’s beleaguered CEO and founder Travis Kalanick has resigned from his position. Uber has been dogged by controversies in recent months, relating to both its internal culture and its operations as a business. Kalanick decided to step back from the role of CEO after major investors wrote to the company and asked for him to be removed. He will remain on the company’s board. — New York Times

The Islamic State group has “blown up” the Great Mosque of al-Nuri, a mosque in Mosul known for its leaning minaret, according to Iraqi forces. But the militant jihadist group has denied the accusation, saying the mosque was in fact destroyed by the US. Al-Nuri was the place IS leader Abu Bakr al-Baghdadi was infamously pictured declaring a caliphate in 2014. — BBC

A police officer has been stabbed at the Michigan airport in an incident the FBI is investigating as a potential terror attack. Early reports indicate it was an isolated incident and that passengers at the airport in Flint were safely evacuated. — Washington Post

In Trump’s Washington, public business increasingly handled behind closed doors (Washington Post): “President Trump is still forbidding the release of his tax returns, his aides have stopped releasing logs of visitors to the White House and his media aides have started banning cameras at otherwise routine news briefings. Trump even refuses to acknowledge to the public that he plays golf during his frequent weekend visits to his private golf courses. The federal government’s leaders are hiding from public scrutiny …”

How cats used humans to conquer the world (The Atlantic): “Sometime around the invention of agriculture, the cats came crawling. It was mice and rats, probably, that attracted the wild felines. And so cats and humans began their millennia-long coexistence. This relationship has been good for us of course—formerly because cats caught the disease-carrying pests stealing our food and presently because cleaning up their hairballs somehow gives purpose to our modern lives. But this relationship has been great for cats as species, too.”

How an entire nation became Russia’s test lab for cyber-war (Wired): “On separate occasions, invisible saboteurs have turned off the electricity to hundreds of thousands of people … A hacker army has systematically undermined practically every sector of Ukraine: media, finance, transportation, military, politics, energy. Wave after wave of intrusions have deleted data, destroyed computers, and in some cases paralyzed organizations’ most basic functions.”

A bunch of CIA staff got fired for stealing snacks from vending machines (BuzzFeed): “The workers were estimated to have stolen $3,314.40 worth of goods from the vending machines.”