Mark Colvin's niece is fundraising for memorial loos, per his wishes, and our national broadsheet is living up to its slogan, "for the informed Australian".

Today in Media Files, Mark Colvin’s niece is fundraising for memorial toilets, as per his wishes, and our national broadsheet is living up to its slogan, “for the informed Australian”.

Colvin’s crappy memorial. Mark Colvin’s niece Lucinda Higgie is raising money for the toilet seats the ABC broadcaster wanted to donate, inscribed as the broadcaster requested with “enjoy this comfortable crap, courtesy of me, Mark Colvin”. Higgie will run in Sydney’s City to Surf fun run, and writes on her fundraising page that the current commode seats at the Prince of Wales Hospital in Sydney, where Colvin was treated, are humiliating to use. Colvin died in May, after more than 20 years of chronic illness stemming from a rare disease picked up when reporting on the Rwandan genocide.

ABC spies on employees. ABC management has accessed staff email accounts more than a dozen times over two years, according to freedom of information documents obtained by The New Daily. The ABC said the access was to find contracts and correspondence to ensure continuation of business, mostly for ex-staff, and told the website that the protection of journalists’ sources was “sacrosanct”.

We’ve only seen one campaign poster this morning — this effort posted on Twitter by the Herald Sun‘s politics reporter Rob Harris in support of Crowe: 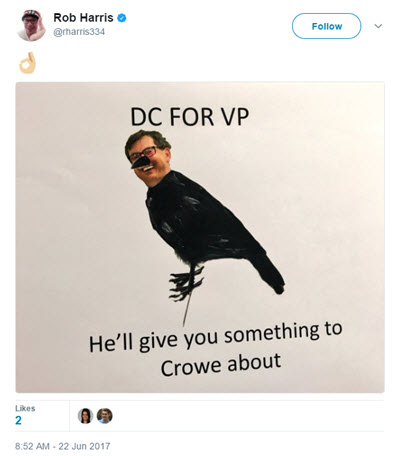 Could Fairfax takeover heat be cooling? The Australian Financial Review and its Street Talk column has led the reporting and news breaks on private equity interest in Fairfax Media. TPG and Hellman and Friedman are the two US-based groups now doing due diligence on the company. That being the case, what are we to make of the suggestion this morning in Street Talk that Fairfax’s forecasts are not as convincing as CEO Greg Hywood and the board would like them to be?

“It’s understood some lenders have raised concerns about the quality of Fairfax Media’s earnings, particularly future forecasts in the traditional media business. While the banks went into the dataroom knowing what Fairfax Media’s historical earnings looked like, it’s management’s read on the future that has proved troubling. It means the two would-be buyers have some way to go before each can get investment committee approval for a bid.”

Fairfax shares closed at $1.215 on Wednesday, down a cent on the day. Its highest level was $1.27 (a week after the two firms were granted due diligence) during trading on May 29. That’s a fall of 6% to yesterday’s close. Should the shares drift further below $1.20, you might start wondering if the takeover ardour is cooling and perhaps Fairfax will be left to either fend for itself, or have to face up to a lower-priced offer. — Glenn Dyer

Return of the Space Cowboy! It’s Mauuuuuuuuurice! Maurice Newman is back on form in the Oz. After a number of relatively sane pieces on banking — Maurice made his career in our pre-Hawke/Keating highly protected Keynesian banking sector, where you could have fed a truckload of money to seals and still rise to the top — Maurice returns with a barnburner about the global plot for Marxist dominance, which appears to involve the creation of the UN, the IMF, criticism of religion, the ABC and Julie Bishop. Par for the course, but good to see it back. There’s no rip-roaring howlers — as when a few months back, Mauuuuuurice approvingly quoted The Power Elite, a sociology classic by the American post-war Marxist C. Wright Mills.

But there’s something better, a lead paragraph detailing the terrifying vision of W. Cleon Skousen, who believed that Marxists were infiltrating every area of social life with nefarious schemes like pop music, women’s equality, etc, etc.

Who was Skousen? Born in 1913, he was a Mormon preacher, who became an FBI agent and a police chief, after which he founded a group called “The All-American Society”, usually seen as to the right of the John Birch Society. His 1963 book The Naked Communist details the far-reaching global Communist conspiracy as he saw it. Leading Communists, according to Skousen, included President Dwight Eisenhower and Henry Kissinger. But it’s in his 1970 book The Naked Capitalist that he really lets rip, arguing that the global Communist conspiracy is hand-in-glove with a one-world government conspiracy run by bankers. One family of bankers in particular. Yes, you guessed it, the Rothschilds.

Skousen draws on European anti-Semites such as Arsene de Goulevitch (a promoter of conspiracy theory The Protocols of the Elders of Zion) to argue that the Rothschilds are at the centre of a multi-centuries conspiracy to control the world, and that finance capital, communism and fascism are simply wings of the same movement. Throughout the 1970s, Skousen’s theories became so extreme that many on the right distanced themselves from him. He was thrown out of the Mormon church in 1979, after arguing that the church’s 1978 decision to revoke a ban on African-Americans becoming Mormon preachers was evidence of Communist infiltration into the Mormons. His most vocal recent supporter was former Fox News Channel host Glenn Beck (also a Mormon), who advised people to shun the banking system altogether, and turn their savings into gold, to be stored into underground vaults.

So it’s all a conspiracy of bankers. Well, I guess Maurice would know. Maybe he got invited to the meetings. In the meantime, it’s nice to see News Corp trashing the masthead of The Australian still further by publishing anti-Semitic ravings on its op-ed page. Or is it just that, Mauuuuurice hasn’t read the book he’s quoting, and has made a fool of himself. Again. — Guy Rundle

Too hot for broadcast. The UK’s Good Morning Britain program was plagued by technical problems yesterday as the extreme heat (for Britons) wreaked havoc on transmission. As hosts Piers Morgan and Susanna Reid were on air, the program vision was repeatedly interrupted with a clock graphic and at one point had the ITV logo while viewers could still hear the program. 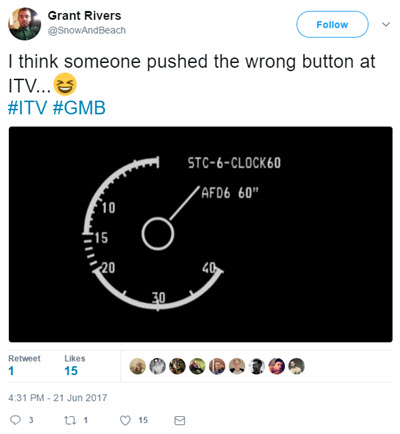 Discussing the problems, Reid told viewers there was overheating at the Chiswick transmission station, which was causing the technical problems: 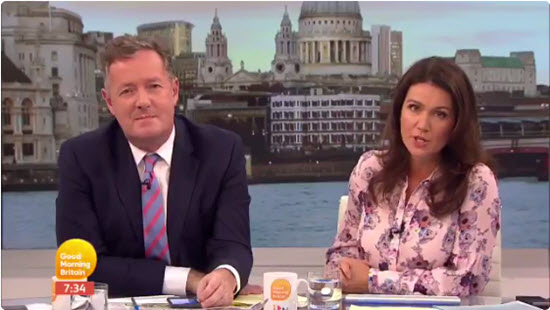 Morgan embraced the chaos: “Basically we’ve lost control and anything could happen … if I were you I would just sit back at home, have a cup of tea and enjoy the ride because we have absolutely no idea what is happening or how to control it.”

Wednesday was the hottest June day in 40 years in Britain, with the mercury at Heathrow tipping 34.5C.

Glenn Dyer’s TV Ratings. The audience for the country’s biggest annual sporting event — the three game State of Origin Rugby League series — seems to have hit its natural peak and is now on the way down, especially in regional areas of NSW and Queensland, rugby league’s supposed heartlands.

That could be the take from the weak figures for the first two games of the 2017 series. Queensland’s win in a thriller last night in game two of Origin, but not for Nine where the audience fell on the first game, won by NSW. It was only down 44,000 viewers, but with the build up and the chance of a NSW win, you would expect a lot more viewers to tune in. They did in the metros, where the audience rose 32,000. But the regional audience dipped to 1.10 million from 1.17 million for game one. In fact, like game one, game two’s audience last night was the lowest audience since 2011.

The return of Mad as Hell on the ABC managed 793,000 nationally for its return last night — not bad against Origin. And being a NSW fan, Mad As Hell was definitely the night’s winner! Nine’s night in metros and regionals, of course. Origin dominated the regions. First place with 1.10 million for the game, 717,000 for the pre-match, Seven News was third with 650,000. The post origin wrap was fourth with 629,000 and Home and Away was fifth with 511,000. — Read the rest on the Crikey website

Good one guy. I’m surprised Mauuuuuuuurice and Malfeasance Robot haven’t got together to chew the conspiracy fat.

More the space junkie – taking it up.

Not just the mudorc rags, mad Mauri was on HateRadio last week giving a taster of his fiscal rectal.. sorry, rectitude and warning of the dire consequences if Talcum isn’t dumped.
The kicker was his praise for the Hockey budget which would have solved all our problems except for those damned kids in the dastardly Senate.