Today in Media Files, a Gold Coast Bulletin columnist has published her final column on Facebook attacking the paper, and Bauer has announced Nick Chan will be leaving immediately as CEO, to be replaced by Paul Dykzeul.

Gold Coast Bully columnist’s last word. Gold Coast Bulletin columnist Alice Gorman has unleashed on the paper in a final column published on Facebook. Gorman told Crikey this morning she had submitted a toned-down version for her usual Saturday spot in the paper, but it was not printed, and she wasn’t given a reason. In the Facebook post, Gorman said columns she had written had either been held or watered down:

“The Bulletin has lost a huge number of talented staff to budget cuts. Readership is down too, no thanks to calls from the Mayor to boycott the paper whenever it runs a story he doesn’t like. The paper’s weakened financial position means it has succumbed to outside pressures.

“Readers and Gold Coast residents are the real losers.”

Bauer CEO replaced. Bauer’s CEO won’t be around to sign a cheque to Rebel Wilson, leaving the company after just a year in the job. Nick Chan, who we hear did not see eye-to-eye with the bosses of the German media group, will be replaced by Bauer NZ boss Paul Dykzeul, who will be CEO of the Australian and NZ part of the group. Chan has now left the company. Bauer shut down Shop Til You Drop earlier this year, the print edition of Dolly was axed in December, and it sold off five adventure titles and their websites in October. Bauer lost a defamation case against its magazine Woman’s Day last week for a series of stories it printed about actor Rebel Wilson. The court is yet to decide on costs.

Groundhog Day on journo’s tax advice. The end of financial year often brings annual reminders about what can or can’t be claimed as a work-related expense. It can be a tough call to make, particularly when the Australian Taxation Office keeps reminding us they’ll be targeting those expense claims.

On Monday, Anthony Keane wrote in The Daily Telegraph the ATO was more able than ever to spot dodgy deductions and warned Australians to “avoid incorrect claims for work-related expenses”.

If that warning sounded familiar, it may be because last year Keane told his readers:

Back in 2015, Keane took a year off from his usual spiel, instead telling us:

“Australians are throwing hundreds of millions of dollars down the drain every year by failing to claim the tax deductions they should.”

It’s possible some people were hesitant to claim too many work-related expenses after reading Keane’s 2014 article which warned the ATO would target all Australian, regardless of their job:

“In a break from tradition, the ATO is not focusing on individual occupations but instead on specific types of work-related claims.”

Everything is awesome. The NSW budget was released yesterday, so today, as usual, is for the cartoonists and designers on the Sydney front pages. 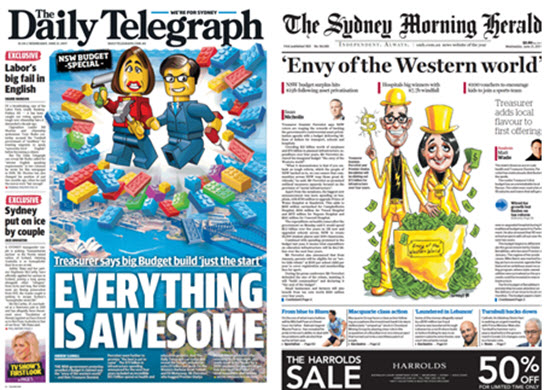 Press gallery election. The federal press gallery will hold a snap election for its committee vice-president after Fairfax’s Fleur Anderson took a voluntary redundancy, finishing up last week. President Andrew Meares has called for nominations by the end of today so the election can be held tomorrow, before Parliament’s winter break.

Copyright hurdle to accessible books cleared. Vision Australia has welcomed changes to the Copyright Act passed last week that will allow more books to be reproduced into accessible formats. The amendments have knocked down the last barriers to implementing the Marrakesh Treaty, which allows countries to share accessible copies of work. NSW and ACT manager of client services Michael Simpson, who is also blind, said previously if any rights for an audio version of a book had been sold, copyright laws prevented anyone making an accessible version. Many of the mainstream audio books are not compatible with some accessible software, and they often lack the ability to navigate as you would with chapters.

Simpson told Crikey that while Vision Australia had about 40,000 accessible books in its library (which is available to anyone with a print disability, not just blind or vision-impaired people), which did not come anywhere near the number of books in print. “One of the huge advantages will be that people like me who are blind will be able to read the same books that their family members are reading at the same time,” he said. “My wife is an avid reader, and she’s often saying she’s watching such and such, and I go to the audio book collection only to be told we don’t have it.”

TPG’s vice purchase a lesson for legacy media. If you’re mega-billionaire Texan David Bonderman (founder of private equity firm TPG), and someone suggests buying Fairfax Media, you might just hand over the more than US$4.2 billion. And if one of your clever young fund managers suggests putting US$450 million into Vice Media’s latest funding round, you might also say yes.

The TPG exec had to resign from the Uber board last week (his firm has a lot of profits in that one) for making a sexist joke on the same day the Uber forced CEO Travis Kalanick to take indefinite leave over allegations of sexual harassment and discrimination at the company.

But Bonderman has shown he gets what Vice Media is all about: making money. Vice’s value jumped from US$2.5 billion three years ago to US$5.7 billion following the investment. That makes Vice a really big unicorn in Silicon Valley terms (an unlisted tech stock worth US$1 billion or more). But it is not a tech stock as such — it is merely a more modern version of a legacy TV network, program maker and print media group, like Fairfax Media.

It has one thing in its favour — it reaches millennials like very few other media companies do. And that is very hard for legacy media types to grasp as they (in Australia) argue about audience reach, ownership and News Corp tries to become even bigger and control more of our legacy media outlets — and watch the likes of Facebook, Google, and Vice Media eat their lunch and customers. They all had their chances to come to grips with the future but failed.

According to US analysts, the TPG funding values Vice at US$5.7 billion, or about A$7.5 billion. That is more than Fairfax is worth, or the free-to-air media companies, or News Corp’s print and pay TV interests in Australia (leaving out the 61% of REA Group). Other investors in Vice from mainstream media have included A&E Networks (jointly owned by Hearst and Disney), which invested US$230 million in late 2015, and Disney, which pumped in US$400 million in late 2015. 21st Century Fox invested $US75 million in 2013.

And guess who is bed with Vice Media in this country? SBS — the broadcaster every commercial TV and print company goes out of their way to laugh at. So far as TPG is concerned, Fairfax is a strip (the Domain property business) and dump (the newspapers and other assets) opportunity, Vice Media is growth, and the future. There is a lesson in both deals for all investors in Australian legacy media, especially the Murdochs. — Glenn Dyer

No more signal for C31. Melbourne’s community TV station Channel 31 will switch off free to air at the end of the month when the federal government switches off its signal. The station has been fighting to keep its spectrum, but said in an email to subscribers from general manager Matthew Field it would continue to push out content on its digital platforms. Awkwardly, the station was going to be closed at the end of December, prompting a farewell marathon, before it earned a six-month reprieve. But there’s to be no reprieve this time, with Communications Minister Mitch Fifield writing to the station last week to confirm the switch. Field said the station would be supported by a new production unit.

Glenn Dyer’s TV ratings. The worm turns, there’s life after death, or the Ten Network is still alive (but it is still dying, slowly) — whatever the metaphor, Ten showed up its rivals last night with a very solid performance. Or rather, the absence of the usual heavy hitters on Nine (The Voice) and Seven (House Rules) left the way open for Ten to sneak home in the main channels and run second to Seven in total people. We can add that to the second-tier programs (and third in a couple of cases) on Nine and Ten, plus Nine running a little comatose with its week’s hopes built on the second State of Origin game in Sydney tonight.

MasterChef managed 1.256 million viewers nationally last night and was the sixth most watched program. Ten’s Shark Tank sneaked into 10th nationally with a solid 1.023 million. But Seven and Nine News were the top programs in regional, metro and nationally, so it was on the whole a boring night for viewers after 7pm. Seven’s First Dates ended with 864,000 (that’s for the local version from 7.30pm). The UK original from 8.40pm fell to a national figure of 576,000, which didn’t help Seven one bit. Nine’s Love Child continued its weak run this time out with 769,000 at 8.30pm. And ignore Origin — watch Shaun Micallef’s Mad As Hell at 8.30 tonight on ABC. You can catch the rest of Origin from 9pm — there will still be an hour or so to go — if you want a bit of biffo.

Plotting the murder of Channel 31 again? It’s just so self-defeating and stupid

White dot fever: cleaning up spectrum kills off Channel 31 for no good reason

GC Bullshittin – this from the stable of self-censoring pricks that complain about “government censorship” and champion “freedom of the press”? They’re m.o. is Limited News’ freedom to censor the public’s right to know – and God help anyone who crosses their line.