Safe Schools still a target. It looks as if the Safe Schools program is again being used as a way to target conservative members of the Chinese-speaking community. Ms Tips understands that assistant minister to the Treasurer Michael Sukkar will be hosting an afternoon tea event at Liberal HQ in Melbourne on Sunday, along with former Liberal candidate Karina Okotel and the Chinese Liberals Association, about the Safe Schools anti-bullying program in schools, aimed solely at members of the Chinese community. According to a tipster, the invite, written in Mandarin, asks “what are your children learning at school?” and makes mention of premature sex education, including teaching about homosexuality.

The Safe Schools program was used by the Christian Democratic Party in last year’s election campaign as a reason not to vote for the Labor Party in flyers written in Mandarin, as Crikey reported at the time.

We asked Sukkar’s office what the event was and why he was hosting it, but didn’t hear back by deadline.

You can get it passing legislation. The Sydney Institute’s Gerard Henderson loves to comment on what has been said at “gin o’clock”, but the Federation Chamber reached “beer o’clock” just after 6.30pm last night, with Labor infrastructure spokesperson Anthony Albanese taking up the case of Australia’s craft breweries, calling for a reduction in the excise charged to small beer producers, to bring it in line with that charged to the big breweries. After namedropping a local brewery in his electorate, Albo ended the speech thus: “I will end with a quote from Russell Crowe, as his character John Nash in the film A Beautiful Mind: I have respect for beer.”

Deputy Speaker Andrew “Tasty” Hastie was residing over the chamber at the time and even accused Albo of less refined tastes: “I took the member for Grayndler to be a simple man who perhaps went for Tooheys, but there you are!”

Hastie’s infamous drinking partner Tim Wilson also spoke in favour of the motion, because craft beer aside, he hasn’t met an excise he doesn’t want to cut, and he even referred to the Cooper’s video that landed the pair in hot water: “I know, Deputy Speaker Hastie, you like beer from time to time. In fact, I have had one with you on famous and less famous occasions, so I am sure you will be supportive of this motion as well.”

Labor’s Joel Fitzgibbon and Brian Mitchell also spoke in favour of supporting craft beer, and the Liberals’ John Alexander rounded out the speeches by referring to the health benefits of beers from his local brewery: “I must say, though, as an elite athlete often competing in the most testing heat, my training made me vitally aware of the importance of maintaining hydration. That is why I always keep handy my favourite fluid loss replacement, Endeavour Pale Ale.”

Waleed Aly, superhero and controller of all Muslims. Has Waleed Aly got special powers we don’t know about? Does Andrew Bolt have the inside word? The News Corp columnist opened his Sky News program last night with a plea to Aly, as a “Muslim leader” to “step up” and “stop being apologists for Islam” because “he is Australia’s most prominent Muslim”. This, after a white man, now identified as Darren Osborne, had driven a van into a crowd outside a mosque in the UK. Last time we checked, apart from being famous, Aly is not actually a cleric. But according to Bolt, he seems to have a special ability to stop terrorism. We still haven’t worked out how that actually works. 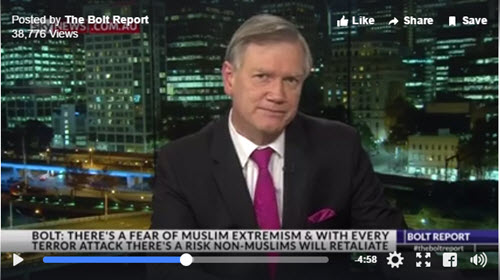 Conversely, Andrew Bolt has done everything within his power to make sure we Australians will undergo the same terrorist tactics suffered by the English.

does no one understand Bolt and Pauline Hanson indulge in very nasty terrorism.

That is if Aly wants to be part of Blot-Dutton-Turnbull-Abbott’s Team Oz II?

Unfortunately, the Deadbolt is unable to comprehend that Waleed Aly is simply a well-educated, thoughtful Muslim and not an Imam. He doesn’t care about white men who commit atrocities against Muslims because he would secretly like to be carrying them out himself, and it’s AOK is it’s only Muslims who are targeted in his narrow little world view.

If Waleed Aly was to “step up” (whatever that means) just imagine the wrath Blot would unleash upon him anytime there was a terrorist incident in Oz, basically holding him responsible for not reigning in every off-the-rails Muslim.

Perhaps we should ask Blot to “step up” to castigate all first generation Australians who commit a felony. After all, Blot is Australia’s most prominent offspring of European parents. It’s identical logic.

Only one thing we need to know about Blot, he’s paid to bait the Left – he’s a master baiter.

Blot’s ‘call to disarm’ to Aly was repeated during his nightly tongue with the Poison Dwarf on Macquarie radio.
The Hobbsean (nasty, brutish & short) Price offered to negotiate this summit on his behalf as he appears, for reasons that defy explanation, with Aly on TEN’s Project, though he might want to hurry before the tentacles of mudorc’s spawn wrap around that sinking station.