Mayne: will the Brits show some spine and resist Murdoch rent-seeking?

The Murdochs are masterful rent-seekers when it comes to politically vulnerable Western governments.

It’s going to be a big few days for the rent-seeking Murdoch family as they await tonight’s regulatory advice to the UK government on their $20 billion Sky PLC take-over, plus seek legislative favours in Australia to seize control of Ten Network Holdings.

The Ofcom decision about the cash bid for Sky by 21st Century Fox was originally scheduled for May 16 after public submissions were received up until the end of March.

I lodged this 2500-word submission at the time, calling for these two conditions to be placed on the takeover:

The detailed corporate governance arguments for these conditions were spelt out in this Crikey piece on March 31, and little has changed since then, besides more appalling Murdoch family conflicts of interest and bullying being exposed as Ten Network Holdings hit the wall.

UK Prime Minister Theresa May then decided to go to an early election, so the Ofcom decision was pushed back until June 20.

The New York Times has comprehensively summarised all the issues overnight, pointing to these four possible scenarios after Culture Secretary Karen Bradley is given the confidential Ofcom report:

“Ofcom may give its unconditional backing to the takeover, or recommend that the government block the deal, both of which are considered unlikely. It could recommend that 21st Century Fox make concessions, such as guaranteeing the independence of Sky News, the British news organization owned by Sky. Or the authorities may call for a more in-depth review by Britain’s competition authority, extending the outcome until the autumn. No matter what happens, it will probably be weeks, if not months, before a final decision is made.”

As is their want, the Murdochs fiercely backed the re-election of the Tory government, including running a picture of Labour leader Jeremy Corbyn living in a dustbin on page 1 of The Sun on election day. 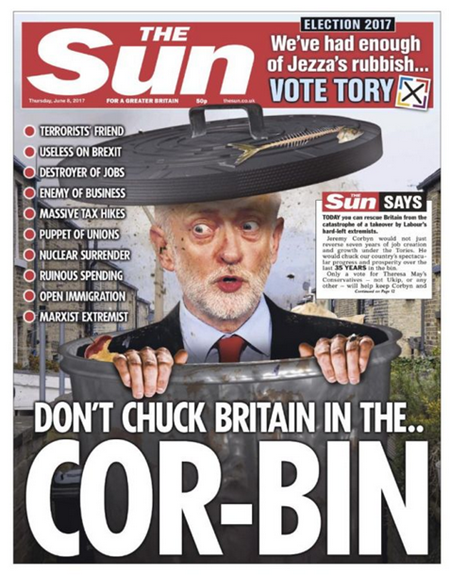 Tom Watson, the most effective political critic of Rupert Murdoch and now deputy Labour leader in the UK, used his election night speech to slam the “lies” told by News Corp’s British outlets during the election campaign and has subsequently piled on the pressure about why Murdoch employee Michael Gove was re-appointed to the May cabinet as Environment Secretary.

As masterful rent-seekers from politically vulnerable Western governments, the obvious payback for the Murdochs will be approval of the Sky bid, something they were forced to give up at the peak of the phone-hacking scandal.

However, the younger anti-Brexit voters based around London led a revolt against the Tories and their Brexiteer media backers from New York, which has left Theresa May severely weakened.

And with the Murdochs also on the nose for their blind endorsements of Donald Trump, climate denialism and toxic culture of sexual harassment at Fox News, it is no certainty that approval will be forthcoming, despite the British tradition of welcoming foreign capital.

The same situation applies in Australia with a fragile conservative government attempting to do regulatory favours for the Murdochs by abandoning the two-out of-three-rule, which would clear the way for a family take-over of the embattled Ten Network Holdings.

The Murdoch press has been sugar-coating the dangers of this with the likes of News Corp veteran David Penberthy, who is married to federal Labor MP Kate Ellis, simplistically telling readers in the tabloids on Sunday that Ten’s problems related to “a large debt owed to the Commonwealth Bank and the understandable reluctance of the network’s financial backers (including Lachlan Murdoch) to casually absorb a $200-odd million whack to their bottom line”.

Yeah right, Dave. So it is “understandable” that with a $200 million facility only drawn to $66 million as at February 28, Lachlan Murdoch would threaten to personally sue the Ten directors if they didn’t call in the administrators, thereby shafting 17,000 small shareholders.

Despite its unprecedented majority position in the newspaper market, it is not the “newspaper baron” element of News Corp that is the greatest concern. The Murdoch family also controls a lot of the online debate through its newspaper websites, controls Australia’s pay-TV monopoly Foxtel and now wants one of the three free-to-air TV networks in addition to already owning one of the three biggest commercial radio networks.

Labor and the Greens are understandably opposed, and Malcolm Turnbull should just remove the two-out-three element of his package and see media reform sail through Parliament.

But no, the conservatives are pushing the Murdoch family agenda with not a peep out of any Liberal or National MPs about media ethics or the danger of concentrating such power in the hands of one New York-based family.

Pauline Hanson has long been maligned by the Murdoch press, so the One Nation vote is no certainty.

And if Nick Xenophon backs such a move and the Murdochs get Ten, the popular independent will face questions about his acquiescence to the News Corp dominance of the Adelaide media market, plus his very short memory about all those nasty “slum landlord” attacks The Australian threw at him during last year’s federal election campaign.

Mayne: are the Murdochs (including Rupert) really ‘fit and proper’?

At least someone is willing to challenge the Murdochs’ expansionist agenda

As for Xenophon, as I’ve said before, I always find it hard taking little ‘Eddie Munster’ seriously – emerging from his Liberal closet to howl at this or that moon, before rolling over, to let Malcolm tickle his belly and throw him a bone?

‘little Eddie Munster’ is second only to Cousin Jethro in the coin-a-name-stakes. Truly inspired…& today’s heartiest laugh, thanks.

Perhaps those personal attacks were just a little taste of what Xenophon could expect were NXT to vote against the Hegemon’s ambition?

The Murderous Murdoch’s machinations will go to any lengths to protect their falling empire. They’ve done it for years. I should know, I knew Rupie growing up and he was equally devious and disloyal even in his younger days. Never mind if someone helped you to learn your trade, just shoot them to get rid of them if they got in your way. If Nick Zenophon supports them I will be forced to support no one in the next SA elections. Surely, Nick can’t be that dumb? The Libs and Labs in this state are equally useless, so where to go?