How did the Australian media cover the Finsbury Park attack?

Were the papers reluctant to call it "terrorism" as the alleged attacker was white and the victims were Muslim?

In the very early hours of Monday morning, 47-year-old Darren Osborne is alleged to have driven a truck through a crowd of people leaving Finsbury Park mosque in north London. The means of the terror attack had become frighteningly familiar to the people of the UK, but in this case the alleged perpetrator is white and the victims are Muslim. Some commentators have said media and authorities in the UK were slow to label the event as a terrorist attack and are treating it differently to the London Bridge attack. How did Australia’s papers cover the story?

The national broadsheet quoted the early police description of the attacks as having “all the hallmarks of a terrorist incident” in the lead of Jacquelin Magnay’s front-page story. British Prime Minister Theresa May and London Mayor Sadiq Khan were both unequivocal in describing the event as terror. 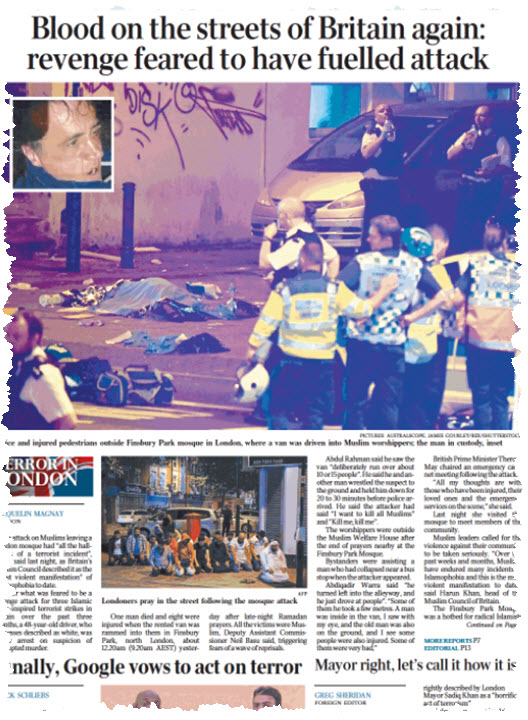 Even Greg Sheridan’s column, dedicated to “calling it like it is” (in which he said, as an act of violence with a political aim, the Finsbury Park attack is terrorism) offered a caveat — “unless it turns out the driver was psychotically deranged, it is terrorism”. This is an out one can’t imagine being offered to, say, Salman Abedi.

Was there a hero Imam?

The Age and The Guardian both reported on “hero” Imam Mohammed Mahmoud, who stepped in and led a group of men who shielded the attacker from the crowd until the authorities arrived. The full story didn’t make the hard copy of the Fairfax papers (although he got a specific mention in the larger piece across pages 8 and 9 in The Age).

Mahmoud is also mentioned in The West Australian‘s story about the perpetrator Darren Osborne. While in the Oz, Sheridan commended the restraint of onlookers while waiting for the authorities, Mahmoud got no mention (a story on Mahmoud, sourced from The Times, has since gone on the Oz‘s website). A Finsbury Park mosque imam who did get a mention in the The Australian, the Herald Sun and The Daily Telegraph — The Tele, incidentally, didn’t get around to mentioning the Finsbury Park story until page 15, after a piece about a matador gored to death in France — was Egyptian hate preacher Abu Hamza al-Masri.

According to the Hun,”Finsbury Park mosque was once synonymous with radical Islam after the infamous hate preacher Abu Hamza al-Masri arrived in 1997″. The Oz goes further, cataloging Hamza’s “followers” as including “‘shoe bomber’ Richard Reid, 9/11 plotter Zacarias Moussaoui and Mohammed Sidique Khan, one of the four suicide bombers who attacked London’s Underground on July 7, 2005”. 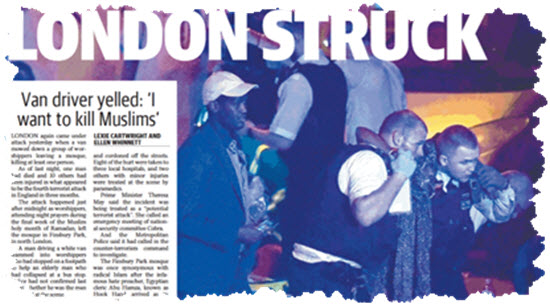 Hamza has not been the imam of Finsbury park since 2003 and was not mentioned by the Fairfax papers. There was also the emphasis on the word revenge, and the recent attacks perpetrated by Muslims in the UK, in particular in the Oz‘s headline and story, with Magnay opening her second par with the assertion that it was “feared to be a revenge attack for three Islamic State-inspired strikes in Britain over the past three months” and saying the victims’ faith triggered “fears of a wave of reprisals”. Neither fear was attributed to anyone in particular. 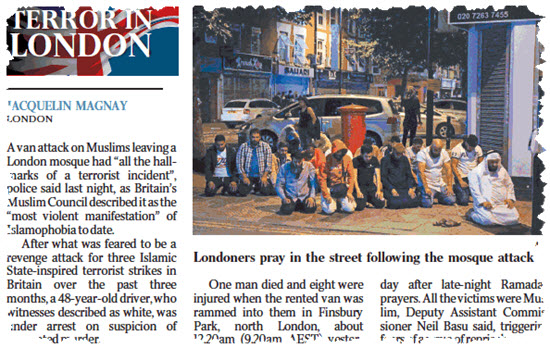 Nevermind Charlie, it’s fine if it’s a whitey who carried out this despicable act because we owe it to “pay back” the terrorists for their actions. Muslims aren’t allowed to fear for their lives because they’re the only “terrorists” in this world. Talk about deluding yourself, the alt-right X’n’s are equally as atrocious.

When is terrorism not terrorism? When it’s revenge.
When is a nut job not a nut job? When he’s a Muslim.
Stay tuned: next week we’ll be back to not all Muslims are terrorists, but all terrorists are Muslims. Can’t let the facts get in the way of a good story, can we? Hell. Ground’s already sown. See my first and second sentences.

The BBC from the first used the phrase “an attack on Muslims” rather than the more neutral “an attack on people leaving a mosque”.
It has remained the descriptor ever since but I don’t recall that Westminster Bridge, Manchester and Borough markets were described as an attack on xtians. Perhaps because it would have been inaccurate as in all 3 outrages there were Muslims among the victims?
Trust GogMagog Sheridan to force things into his Procrustean bed.

AN – Is it only me? Fairfax article on the Finsbury Mosque attack describes ‘hero’ imam stepping up to hold off the angry crowd. Since when has any journalist ever used inverted commas to denote anything other than scepticism? Then Channel 9 news report covering Finsbury, same day. The coverage ended with an equally offensive note – ‘Remarkably, it was the Imam who stepped up to save him’. Remarkably? Really?