The politics of sport. Which is tougher, politics or footy? According to AFLW Crows player Talia Radan, politics. She would know — in addition to her football career, Radan is an advisor to Education Minister Simon Birmingham. Radan and other AFLW players were in Parliament today for the launch of the Parliamentary Friends of AFL Women’s group.

The launch brought politicians from all sides onto the field to back the up and coming AFLW professional sport, including Labor’s Terri Butler, Nationals Senator Bridget McKenzie, Greens Senator Janet Rice, and NXT Senator Skye Kakoschke-Moore. Birmo and Opposition Leader Bill Shorten were on hand to lob footballs at each other before the press conference, and Ms Tips suspects that footage of the Opposition Leader passing a (literal) football particularly hard at Birmo will make the b-roll footage for news items this week as the government rushes to pass its “Gonski 2.0” schools funding package.

Better than Judge Judy. It’s not often that we recommend people watch court proceedings, but last week the Melbourne courts played host to something more like spectator sport (maybe we should have sold popcorn out the front) than arcane legalistic argy-bargy. Watching Friday’s hearing, where federal ministers Greg Hunt, Alan Tudge and Michael Sukkar were represented by Commonwealth Solicitor-General Stephen Donaghue, is a good way to spend an hour of time until Games of Thrones is back on Monday nights next month. Chief Justice Marilyn Warren, Justice Mark Weinberg and Justice Stephen Kaye presided. It’s about half an hour in that we get to the back and forth between Donaghue and Warren about whether or not the ministers are retracting their statements — and the judicial fury is something to behold. 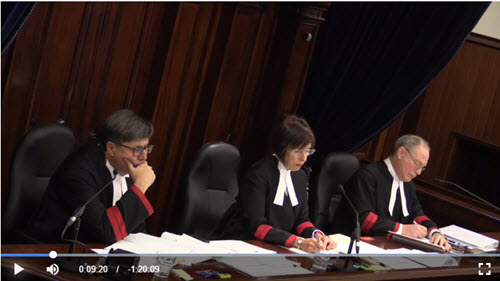 Right up to the deadline. If you’ve been involved in preparing legislation, as some of us at Crikey have been, you’ll know it can be a pretty fraught process if amendments are needed to secure passage through the Senate. That’s the grim reality if a government doesn’t control the upper house (or even, occasionally, if it does), so we don’t like to unnecessarily bag governments over legislative process. But the low-value import GST bill that was considered in the Senate this morning, and which, as of writing, looked like it was going to be delayed at least a year, has been a Barry Crocker.

After waiting for several years to cave in to the demands of our big retailers that consumers be punished for daring to buy somewhere other than Australia’s gouging, oligopolistic retail sector, the government has had months to sort this bill out. True, it was attempting a relatively novel approach (trying to make big online retailers like Amazon collect GST, rather than levy it at the border). But industry — particularly third-party sites like eBay — was flagging concerns about the exposure draft of the bill at the end of 2016. And the government sat silent even after a Senate committee recommended in May that the bill be delayed a year to sort out its problems. Now, here we are, 11 days from the notional commencement of what will be a novel system of GST collection to be applied by companies outside Australia, and the Senate is still debating it. So much for investor certainty. This could all have been avoided if the government agreed to the delay when the Senate committee proposed it, and got on with fixing the bill.

Confusion at eBay. Speaking of the plans to charge GST on all overseas retailers, including for purchases below $1000, eBay is trying to inform its sellers how the tax will work but it looks like eBay itself doesn’t really know how GST works, if an email sent to its sellers over the weekend is anything to go by. 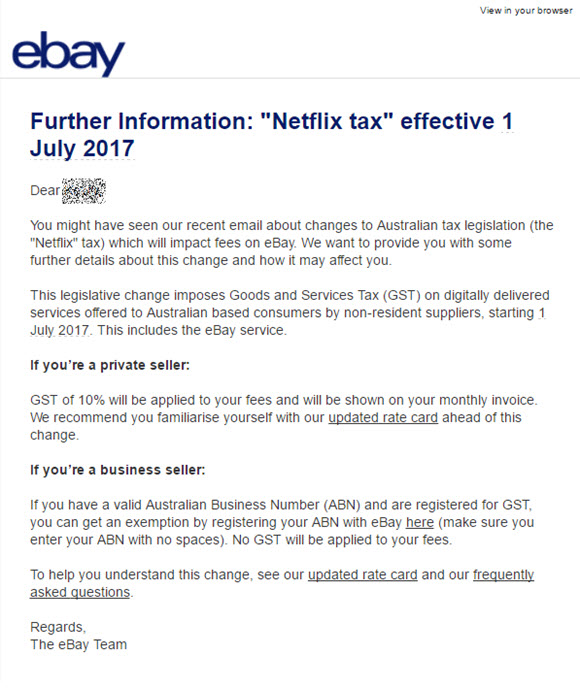 Everyone has frenemies. Ms Tips found it interesting that on Insiders yesterday, the Australian Financial Review‘s editor Michael Stutchbury didn’t mention that Malcolm Turnbull wasn’t the only one to consider China a “frenemy”. In the segment, Stutch talked about the ABC and Fairfax reporting on concerns about political donations from powerful Chinese businesspeople but he failed to mention a “donation” of another sort — in fact it is a regular contribution from the Chinese Government’s chief propaganda arm.

Fairfax Media’s Sydney Morning Herald and The Age have been exposing links between Chinese businesspeople and Australian politicians for weeks but on Friday it was in the same pages along with China Watch, the eight-page insert paid for by China Daily, mouthpiece for the Chinese government. It has the tagline “all you need to know” and the disclaimer “This supplement prepared by China Daily, People’s Republic of China, did not involve the news or editorial departments of The Age“.