The Daily Mail, proving that it has learnt nothing, is in trouble for plagiarising a freelance journalist's stories -- again.

Today in Media Files, it’s feuds all around, with journalist Ginger Gorman calling out the Daily Mail for ripping off her work (again), Chris Kenny getting legal advice over a Gillian Triggs interview published by Fairfax, and former Fairfax journalist Michael West hitting back at Australian Financial Review columnist Joe Aston.

Good feud guide. Freelance journalist Ginger Gorman has gone for another round against the Daily Mail after it published a rewrite of her Fairfax piece over the weekend about her relationship with an online troll. Gorman’s piece told of her experience over more than a year dealing with a troll whom she’d interviewed for a story. She tweeted this morning that the Daily Mail had plagiarised her story, calling the website “slow learners”: 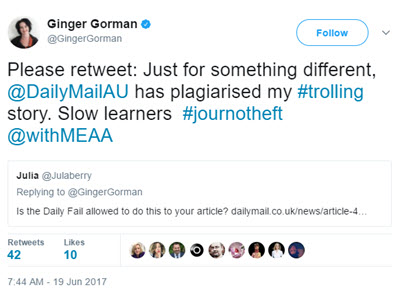 The Mail‘s story, published yesterday, had nothing new to add and was published under the headline,”‘I was trolling a girl who got hit by a train’: Shocking admissions of an internet troll who spends 30 HOURS a week on his sickening habit.”

Gorman has previously called out the Mail and Mamamia for ripping off a story she’d written for news.com.au about mothers who sexually abuse their sons.

Chris Kenny’s feelings hurt. In an exit interview with The Age‘s outgoing political editor Michael Gordon, Australian Human Rights Commission president Gillian Triggs talked about coverage of her and the commission by The Australian during her tenure, and she had this to say about the paper’s associate editor, Chris Kenny:

“He keeps swirling the same facts over and over again and they are not true for a start — and that’s all he’s got. I’ve never met him. He’s never phoned me or made any attempt to understand anything. It’s just been a full-on attack.”

The Australian has responded today in the paper by suggesting Triggs could face legal action over the comments, with Kenny saying:

“I will seek legal advice because this sort of abuse in lieu of facts must be countered. My approaches to her office by phone and email over many months for interviews for The Australian and my television shows have been numerous and always rejected.”

Kenny sued the ABC for defamation over a Chaser sketch broadcast in 2013, where Kenny was photoshopped mounting a dog on The Hamster Decides. The case settled with an apology and cash from the ABC to Kenny.

Michael West v Joe Aston. Also stepping into the ring this morning is former Fairfax business journalist Michael West, who now runs his own business news website. West had written about Australian Financial Review columnist Joe Aston’s pursuit of CPA Australia CEO Alex Malley, and Aston has written this morning in his Rear Window column that West had known Malley for many years, something West has denied:

“Failing to call the subject of your insults before publishing is not just cowardice, it’s a matter of basic journalistic protocol. Journalists are required to make the phone call in order to allow their subjects to respond — and get the facts straight … A detailed rebuttal of Joe’s petty claims would be a waste of time.”

Introducing the newest NT News reporter, No Byline Please. The subs at the NT News must have checked out a bit early when putting Saturday’s sports pages to bed on Friday night. Neglecting to pick up a note from the reporter asking to not have a byline, the request was published where the reporter’s name should have been. Of course, the NT News is never one to shy away from taking the piss, tweeting on Saturday, “our new reporter no byline please is really starting to make his mark at the paper”.

The Parrot calls in from sick bed. There isn’t much that will keep 2GB broadcaster Alan Jones down. Recovering from a health scare last week that took him off air and into intensive care in hospital over the weekend, Jones called into his own show this morning (covered by colleague Chris Smith) to let listeners know that he’s on the mend and should be back on-air next week. He said he’d been “at the exit door” over the weekend, but was now feeling weak, but OK. Jones took an extended break at the end of last year following multiple operations on his back and neck.

Symons apologises for “racist” interview. ABC radio presenter Red Symons has apologised for a controversial interview with colleague Beverley Wang, in which he asked her if she was “yellow”, and asked, “what’s the deal with Asians?”. Symons opened his program on ABC Radio Melbourne this morning with an apology about the interview, which the ABC has since removed from its website:

“The plan was to take on a serious topic, race and culture, and talk with Beverley about a range of related issues. I came across as racist and I was wrong in the way I conducted the interview. This is not who I am, but I acknowledge on this occasion I caused offence and hurt, not only to Beverley but also to our listeners. I offer my sincerest apologies. We need to talk about these issues, but be careful how we consider them.”

The ABC apologised for the interview going to air in a statement on Friday, and said it would review the editorial processes around the content and its use.

The Australian Rugby Union might be holding an emergency general meeting in Sydney tomorrow to discuss a lot of issues — the fate of CEO Bill Pulver, the fate of one or two Super Rugby teams and, of course, the loss to Scotland in a one-off test on Saturday. What should be top of the agenda (but won’t be) is the damage that the incompetence, moaning and groaning of the past year is doing to fans’ support.

More people watched the inaugural grand final of the national netball competition on Nine on Saturday night than the Rugby Wallabies v Scotland test on Ten earlier in the day (it was simulcast on Fox Sports, but this comparison is for free to air TV).

Oztam ratings issued yesterday showed 447,000 people watched the netball on Nine on the network’s main and digital channels. Oddly the pre-match figure was 505,000, so nearly 60,000 people tuned out after watching the lead-up — perhaps they were off partying on a winter’s Saturday night?

But the rugby test could only manage 274,000 national viewers on Ten. That was after a pre-match audience of just 113,000. The post-match audience leapt to 450,000 — that’s a real slap at the game and the sport when more than 200,000 supporters can’t be bothered watching the game and tune in afterwards to see the size of the loss.

And the AFL can’t crow because the netball final also had more viewers than the Swans v Richmond game on Seven and 7mate on Saturday afternoon. The Saturday night AFL game had a total of 586,000 viewers, so the netball’s figures stack up nicely. — Glenn Dyer

Glenn Dyer’s TV ratings. It was Nine’s night in the in total people and the main channels and Seven’s in the regions. The Voice has lost more ground for Nine — 1.37 million nationally last night for two hours from 7pm (the final half hour making the difference between winning and second to Seven). House Rules was the second most watched program on the night nationally with 1.84 million. But it ended at 8.30 pm and viewers went to Sunday Night which managed a decent 1.31 million nationally. Ten’s MasterChef finished well behind its rivals with 1.01 million nationally. The Voice should really have done better, being the Top 10 elimination. No one qualifies as a must watch at this stage.

Didums Chris Kenny.
Alan Jones wished all the best for a fast recovery by Macca on his program on Sunday morning, so he’s got at least one ABC presenter praying for him.

Red Symons had to apologize, which is fair enough. But why didn’t Henderson have to apologize after saying that people with Muslim names and wearing Muslim clothes are treated more leniently by the legal system than middle aged white men?

Clearly Muslims are fair game, if attacked by old white men, at the ABC while Asians are treated differently if the person is, well Red Symons.

If Chris Kenny has any feelings, they are only for himself.

So has Chris Kenny.