We waited a year for this lousy Border Force footage

The Department of Immigration and Border Protection has released footage of Border Force officers testing GoPro cameras on the water.

What do you get after more than a year of waiting for Border Force to respond to a freedom of information request? Not a lot, it turns out.

In April 2016, Crikey filed an FOI request for footage taken during Border Force’s trial of GoPro cameras. As we reported at the time a “small number” of GoPro cameras were issued for specific situations where Border Force agents board vessels at sea, and a second batch of cameras were bought “to evaluate the capability and to examine associated legislative, technical, training and other issues”.

The agency took over 12 months to respond and last week provided a DVD with just one, 32MB, two-minute video with one minute of footage from the trial: 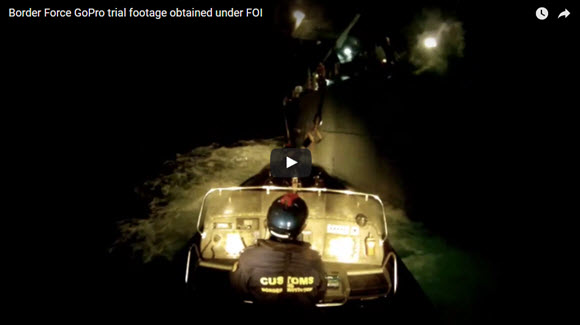 Another eight videos identified by the department were blocked from release. Four of the videos were of border patrol operations prior to the launch of Operation Sovereign Borders (OSB) but contained “tactics and operational procedures” relevant to OSB.

[What are they hiding? The widespread denial of FOI requests]

“This pertains to the national security of Australia,” the department said. “The operations of the assets captured on the video footage form part of the maintenance of the security of the Commonwealth… Australia’s national interests are threatened by any unauthorised arrival of people and the Australian Government has responsibility for the lawful and orderly entry of people into Australia, along with ensuring that only those foreign nationals who are appropriately authorised are allowed to enter and remain.”

The delay in the release of the footage is not surprising considering that as one of the most secretive agencies, the Department of Immigration and Border Protection receives more FOI requests than any other government agency, and potentially more than the other agencies combined. In 2014-15, the Office of the Australian Information Commissioner reported that DIBP, Human Services and the Department of Veteran Affairs received more than 75% of the total of FOI requests to Commonwealth agencies. Between October 2013 and February 2017, DIBP received 59,817 FOI requests. The department has just 81 full-time equivalent staff — a plainly inadequate number given the volume of requests — and an annual budget of $6.7 million to deal with all the requests.

[On-water matter or just bureaucracy? Why FOI requests are languishing]

Typical requests for information should take just 30 days, and the department recently told a Senate estimates committee that it did “attempt to meet these legislative timeframes to the extent possible within the limits of our operational and administrative capacity”. In the last financial year, of the 22,913 FOI requests finalised, 15,710 were finalised within the expected timeframe, but as of February this year 3905 of the 4059 active requests with the agency were outside the statutory timeframe for response.

These aren’t considered “overdue” because under FOI law, failure to respond in the timeframe can be treated as a refusal and then escalated for review at a higher level.

The release of the footage under FOI does show that such footage can be requested, meaning footage from other events in Immigration can be requested — such as, say, the Good Friday incident CCTV footage the government and Andrew Bolt claim backs Immigration Minister Peter Dutton’s statements about what sparked the tensions on Manus Island.

The department was still evaluating the use of GoPro cameras on Border Force officers, and said at the time last year that a wider roll-out of cameras that had both audio and video recording could be in breach of state, territory and Commonwealth privacy legislation if used onshore.

Until someone takes this type of non-compliance to the High Court it will keep happening. Look what happened with Brandis’ diary.

All pollies are peachy-keen on FoI when it opposition but, once in office, become devotees of Freedom from Information for the length of their term.