Isentia says Meltwater is taking its hard work and then passing it on to clients.

In Media Files today, media monitoring agency Isentia is trying to get a court injunction against a company it says is ripping off its newspaper clipping licences, an ABC reporter’s close shave and BuzzFeed’s new hire.

Court action over media monitoring rip-offs. Media monitoring, insight and research firm Isentia has started urgent court action against a company it says is breaching its contract. Isentia appeared in the Federal Court in Sydney yesterday accusing Meltwater Australia of subscribing to Isentia’s print monitoring services and then providing that content to its own clients, breaching it contract with Isentia and defrauding News Corp and Fairfax of their own copyright revenue. In a statement, Isentia said Meltwater was “free-riding” on Isentia’s licences and rights to distribute press clippings.

“Isentia is concerned that Meltwater’s unlawful conduct in relation to its contract with Isentia may be even more extensive than Isentia has been able to identify to date.  Evidence was filed indicating that Meltwater has connections to an organisation located in India which appears to be systematically scraping content from Isentia’s services.”

The matter will be back in court next week for a hearing on the injunctions.

You won’t believe who BuzzFeed‘s hired. In another change to its newsroom, Buzzfeed Australia has announced this morning its new indigenous affairs reporter, Amy McQuire. McQuire is a previous editor of National Indigenous Times and Tracker Magazine, has reported for NITV and has filed for New Matilda, Guardian Australia and ABC radio. She will start in July and replaces Allan Clarke, who finished up at BuzzFeed earlier this year.

BuzzFeed Australia editor-in-chief Simon Crerar said he was delighted about the hire: “I’m enormously thrilled to have Amy furthering the work we’ve done in the indigenous affairs space, where there is so much reporting to do.”

It comes during a period of change at the website. News editor Rob Stott announced yesterday he is leaving for a role as managing editor of Junkee, and politics editor Mark Di Stefano is leaving to live in London.

In the firing line. The ABC’s south-east Asia correspondent Adam Harvey has had an incredibly lucky escape while covering conflict in the Philippines city of Marawi yesterday. He was shot in the neck by a stray bullet and posted an x-ray of the lodged ammunition in his neck on Twitter, with the caption, “lucky”. 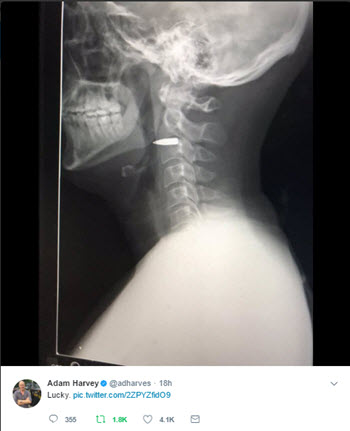 After an hour in surgery, Dr Emmanuel Ibay removed the bullet, which Harvey says was 1cm from his carotid artery.

News Corp: Bigger than Facebook! Why is News Corp so scared of Facebook? If you believe Australia’s media bosses, not least those from News Corp, Facebook is one of the biggest threat to Australia’s media. But according to the latest Emma readership data, as per the Daily Telegraph today (on page 2, no less), News Corp is “bigger than Facebook”. The data, released yesterday, reportedly shows that the News Corp papers and websites reach 16.1 million people a month — apparently more than Facebook (although it’s unclear where the Tele got that stat from — according to numbers from Vivid Social, there were 17 million active Facebook users in Australia in May). 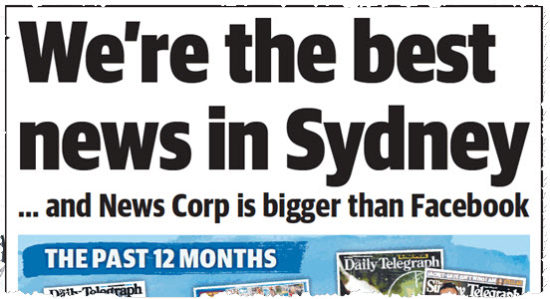 Where were the subs? Ad placement doesn’t get much worse than this. One of The West Australian‘s five pages of coverage of the horrific London tower fire — which we now know has killed at least 17 people, a number likely to rise — included an ad for a funeral parlour. The ad is for Just Cremations, promoting their “no fuss” approach to funerals — an awkward placement that surely should have been picked up before going to print. 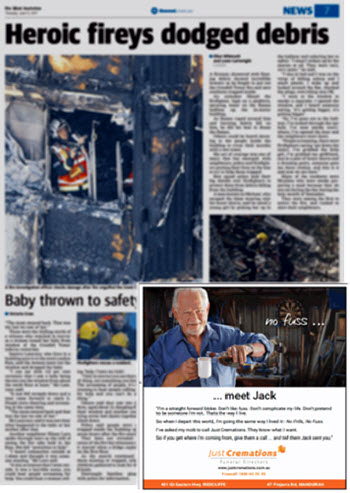 Glenn Dyer’s TV ratings. A very dull night — the AFL game between Geelong and the Weagles was the highlight for many viewers, especially in Melbourne and Perth (this of course excluded MasterChef, which was again far more interesting than episodes earlier in the week). Overall it was a big night for Seven in total people and the main channels.

The AFL game had 838,000 viewers on Seven and 7Mate, plus another 249,000 on Fox Sports, for a total national audience of 1.08 million. Masterchef starred though with 1.15 million nationally and was the most watched non-news program on the night.

Pauline Hanson ignores the media, gets plenty of coverage