We can't decide if Chloe Shorten or Julie Bishop was the best best dressed.

Deputy Prime Minister Barnaby Joyce cracked out the whip to open this year’s Midwinter Ball, the annual night the pollies, the press, staffers and corporate lobbyists dress up and get down in the Great Hall to dance the night away and raise money for charity.

The best dressed would be a tie between Foreign Minister Julie Bishop — whose dress could be best described as glorious — or Chloe Shorten, who was wearing a gown in plum, the colour of the season. For the men, it was a bit of a tougher ask, many went without the bow tie standard, instead opting for business wear. The Australian‘s James Jeffrey was a stand-out in his kilt, but sadly lacking the bagpipes we were treated to earlier in the year. 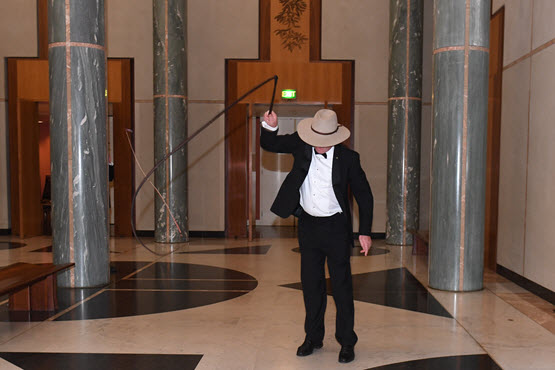 One of the more interesting aspects of the night is figuring out which corporate sponsors or news outlets put which ministers or politicians on their tables. Qantas CEO Alan Joyce was holding court with Anthony Albanese and Darren Chester. We feel as though it would have been a night of commiserating at the Fairfax table between Greg Hywood and Josh Frydenberg, while on another table, the rumours were true that Immigration Minister Peter Dutton was seated with his avowed enemy: Fairfax journalists.

As he pushes for media reforms, Mitch Fifield was seated with Foxtel. After buying up all that ad time on Sky News, Tom Snow from Australians 4 Equality was also on the Foxtel table. SBS played it fair with two Liberal and two Labor pollies: Lisa Singh and Michelle Rowland from Labor and Ken Wyatt and Trent Zimmerman from the Coalition. The ABC hosted noted critic Bridget McKenzie and Andrew Hastie. Fairfax’s Greg Hywood was, like Chloe Shorten, wearing plum, with a fetching scarf. 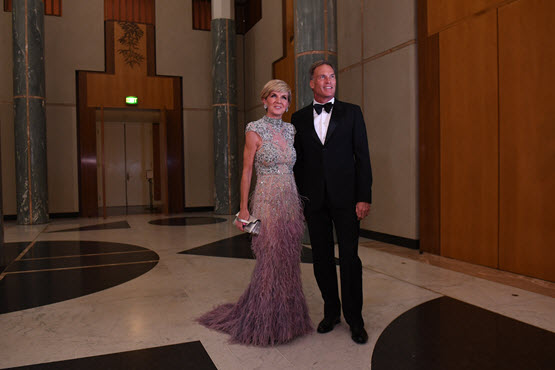 After being stuck at the back last year, One Nation Senator Pauline Hanson was placed much closer to the front of the room this year, seated at a table with her One Nation colleague Brian Burston and her chief of staff James Ashby, plus Bob Katter, Rob Mitchell, and Crikey‘s Josh Taylor. Someone in the planning committee had fun with that arrangement. 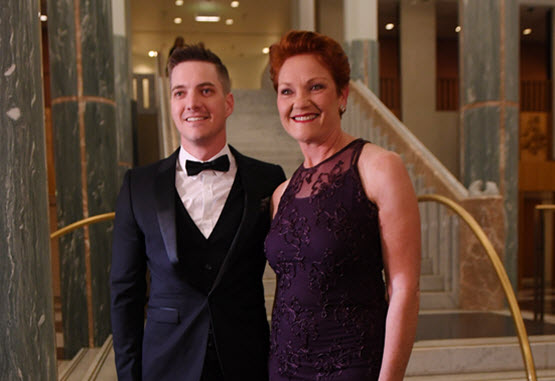 The Prime Minister’s second speech to the ball was well received, and included Malsplaining “Netflix and chill”, and an impressive Donald Trump impression — something he has clearly been working on for some time. Opposition Leader Bill Shorten’s speech missed the mark, however, with a few notable awkward silences in the room. Some jokes seemed as badly planned as Labor’s jobs ad. Rumour has it that Shorten hired a comedian known for his Turnbull impersonation to write the jokes for the speech this year, so why it failed to bring the house down remains a mystery.

Eurovision winner (in our hearts) Dami Im performed her Eurovision hit, along with a range of covers, most notably Dolly Parton’s Jolene as the crowd tore up the dance floor until well after midnight.

Although he was the butt of several jokes — including about the Liberal leadership and Craig Laundy — Tony Abbott was absent from the event, although rumours swirled he was spotted later in the evening.

Labor Senator Sam Dastyari, similarly absent, was also the focus of many jokes throughout the night. One potential reason for his absence is that Midwinter Ball could be seen as a bad omen for him. The first year he went, all the jokes were on his Killing Season acting debut, while last year it came as Dasher was in trouble for donations, the first time around. He was later spotted at Public Bar after the event wrapped up, however. Liberal Senator Dean Smith and Nationals Senator Bridget McKenzie were also spotted kicking on at Public Bar.

Several politicians who were due to attend ended up pulling out due to a cold ripping through both houses of Parliament.

Did Jethro charge us to attend this one too?

Just so against Laurie Oaks publishing the PM’s commentsat at this event.
I don’t care what he says…it was the wrong thing to do. And I vote for the other side.