Controversy equals clicks. The controversy over Mia Freedman’s car crash interview with American author Roxane Gay seems to be abating, but a tipster wonders if perhaps the storm wasn’t so unexpected over at Mamamia HQ. As reported in December, Freedman and her business partner hubby Jason Lavigne appointed KPMG to sell the business, which covers the website and a suite of podcasts. So far the Mamamia Women’s Network, as the business is called, hasn’t sold, and there are reports that the backlash against Freedman might hurt moves to expand the brand in the United States and United Kingdom. But will the controversy hurt the potential sale of the women’s media empire? The value of the business will be clocked on how many clicks the website gets and how many people are listening to the podcasts — is it too much to wonder if this will actually help, not hinder those numbers?

All that glitters is not gold. Government backbencher Andrew “Tasty” Hastie has disclosed the sale of all of his gold bullion on his interests register, less than a year after he disclosed buying the gold. The member for Canning in WA originally declared that he had bought more than $7500 of gold bullion in October last year, but he has already offloaded the asset. Hastie isn’t the only one of our country’s elected representatives to hold a significant amount of gold — One Nation’s Malcolm Roberts does as well (we think that’s down to his suspicion of the banks).

The incompetence takes your breath away — literally. On Tuesday, as part of our apparently endless Flying Heap of Crap Watch series, we reported that the F-35 fleet had been grounded by the US Navy because of the minor problem that pilots were blacking out from oxygen deprivation. So that bit you know (and we’re delighted to see other media outlets have now joined us in cataloging the faults of this piece of garbage we’re wasting billions on). But it gets worse: now US military media are reporting that the Navy has no idea what is actually causing the blackout problems. In evidence to Congress on Tuesday, Vice Admiral Paul Grosklags, commander of Naval Air Systems, said: “We’re not doing well on the diagnosis. To date, we have been unable to find any smoking gun.” We like Grosklags’ choice of metaphor; remember, the F-35’s gun doesn’t have enough bullets and pulls the plane off course when it’s fired. Not that the pilot would notice if she’s unconscious.

The market moves in mysterious ways. Take the shares in Watpac, a smallish Brisbane-based group. Suddenly, around 2.30pm yesterday, the shares jump nearly 5% to 66 cents from an opening of 63 cents. Then they turned tail and fell to a close for the day of 62 cents, a fall of 4%, to be up one cent on Tuesday’s close of 61 cents. For a small company, the moves were almost violently speculative in nature.

Then this morning the shares open 8% down at 56 cents, which is the lowest they have been since 2013. Why? Well, there was the release before trading on Thursday morning of a gloomy trading update for the year to June warning, ominously, of possible impairments in the company’s civil and mining division and a lower-than-expected underlying “broadly breakeven” result for the year to June — down from the pre-tax $8.5 million for the 2015-16 financial year.

The turnover yesterday was just over 101,000, the turnover in the first half hour of trading on Thursday morning was more than 141,000. But back last Friday, June 9, 2.054 million shares were traded, with the shares only falling from 64 cents to 63 cents on the day. That was the highest volume for six weeks. The market does move in mysteriously ways at times.

Ten stars defend bosses. In a bizarre move this morning, the stars of Channel Ten’s morning show Studio 10 called on the Labor Party, One Nation and other members of the crossbench to support changes to media ownership laws, saying that they would be required to save the network, while also saying to cheers from the studio audience that programming would continue as usual. It’s an odd look when on-air talent is spruiking the bosses’ line so obviously. 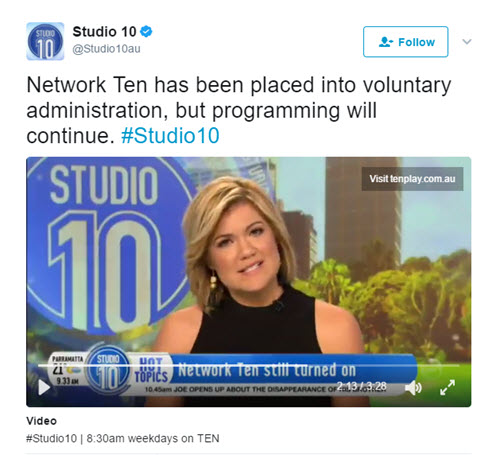 Perhaps the TEN ‘talent’ got the idea from the Drumpfster’s Cabinet doing obeisance to Great God-on-Earth?