Poll Bludger: intergenerational war is the new class conflict in the UK

It's no longer so much a matter of rich versus poor, as old versus young, as the voting patterns from the recent UK general election suggest.

Of the many remarkable features of last Thursday’s British election result, perhaps the most momentous was the supplanting of class-based voting patterns by a new cleavage between the old and the young.

According to an analysis by the Financial Times, a voting gap between the classes that stood at 72% in 1987 (a 40% lead in the Conservatives’ favour among the middle class, and a 32% lead to Labour among the working class) has now been reduced to just 15%.

Meanwhile, Labour’s advantage among those aged 18 to 24 went from the low 20s in 2015 to 50%, while those aged 65 and over went in the opposite direction, as the Conservative lead inflated from the high teens to the low 30s.

This is a confounding development for scholars of electoral behaviour, who long believed that most voters acquired life-long political loyalties at the parent’s knee.

Its impact at last week’s election could be mapped geographically as well as socially, with Labour struggling in the declining industrial areas of the north while pulling off a number of shock victories in and around London.

Most notable among the latter were Canterbury, where university students delivered Labour its first-ever win in a seat that has existed since the Middle Ages, and the plush inner-London environs of Kensington, for which an Australian equivalent would be Malcolm Turnbull losing Wentworth.

[Rundle: how Jeremy Corbyn might have saved the UK]

As our own Labor Party plods along under the determinedly centrist leadership of Bill Shorten, many will be asking if it would be possible for something similar to happen here.

Certainly the litany of grievances accumulated by young voters in Britain — which Owen Jones of The Guardian itemised as “trebling of tuition fees, the scrapping of the educational maintenance allowance, the scrapping of youth services across the country, a housing crisis that disproportionately affects them, the lack of secure jobs, a 10% fall in wages” — sound more than familiar to Australian ears.

Some insight into the state of the youth vote in both countries is offered by the chart below, which uses enrolment, population and polling data, together with a small amount of guesswork, to approximate how the 18-to-24 age bracket did and didn’t vote in the last two British elections, together with our own federal election last year. 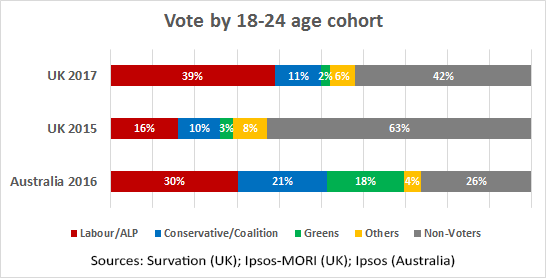 Importantly, “non-voters” is taken to encompass all those eligible to vote and not merely those on the electoral roll, who provide the basis for the published turnout figures.

In comparing the two countries, a neat symmetry is evident between the Australian results and those from the UK in 2015, with Labor, the Coalition and the combined minor parties coming in at about double the result for their British equivalents (with the important distinction that the Australian minor party vote was dominated by the Greens, whose ability to win Senate seats gives them a traction Britain’s Green Party can only dream of).

From this evidence, it might have been inferred that what’s hidden inside the chart’s grey areas is simply a mirror image of the coloured parts.

[Corbyn-bashing ‘centrist’ media like the Guardian can jog right on]

However, Jeremy Corbyn’s accomplishments last week reinforce the impression given by Bernie Sanders in the United States that the voting behaviour of the disengaged youth is heavily contingent upon what’s on offer.

If our own Millennials are anything like Britain’s, it would seem many are choosing sides at elections without much enthusiasm, and that the gap in Labor’s favour could widen fairly substantially if it gave young voters something to get excited about.

Nonetheless, the crude reality is that Australian Labor can take the youth vote for granted to an extent that British Labour cannot, thanks to compulsory voting, which makes the turnout surge seen in Britain impossible to replicate, and preferential voting, which diminishes the imperative to make an active pitch to the left.

By contrast, Labor has everything to fear from the loss of support among the old that ensured Jeremy Corbyn was only able to enjoy a moral victory, rather than a real one.

Poll Bludger: sorry, teens, no one wants to let you vote

Yes, we have compulsory voting, but the poor enrolment rates among the 18-24 age group makes it nominal for them, to some extent. Unclear whether they are disaffected or just apathetic (or both). Would a Sanders/Corbyn energetic old white male as Labor leader make a difference? Of course, even a large increase in enrolment will not necessarily help the progressive cause if it is spread too thinly among a large number of electorates?

Oi, oi, oi. It’s not just young voters who are disillusioned in Oz. Plenty of us “old farts” long ago gave up following “acquired life-long political loyalties (formed) at the parent’s knee”.

When May released the campaign manifesto for the Conservatives, a Tory MP criticised it and said words to the effect of, “the only item not in the manifesto is compulsory euthanasia for those over 70.”

And yet those above 55 still overwhelmingly voted for the Conservatives.

I have also been reading posts by Twitter user @pointlesslettrs (or Pointless Letters), which publishes comments written in the UK papers from readers. There is a huge evidence of intergenerational warfare from what I’ve read.

Did Corbyn really win the youth vote by making ‘an active pitch to the left’ though?

Polling suggests that the critical surge in youth turnout happened in large measure due to fury over the Brexit referendum (which they blamed on the Tories, not on Labour); while the Corbyn policies that really secured the youth vote (in particular, restoring free tertiary education, and abolishing existing student debt) amounted to little more than middle class welfare. Corbyn made no promise by contrast to reverse Tory welfare cuts, while his commitments to tax the rich to restore funding to the NHS and other public services could be thought of to have broad class and age group appeal (apart from to the very rich, of course).

On this view, Corbyn’s Labour didn’t so much pitch to the left as hold to the moderate centre, while the Tories lurched to the hard right with their commitment to a belligerent Brexit (i.e. one, above all, uncompromisingly anti-immigrationist, no matter how damaging). That’s not to say that Corbyn’s promise to reverse Tory austerity didn’t win Labour new supporters, but rather to suggest that the Tories, under a hapless May, did a lot more to lose the battle than Labour actually did to win it.