Comings and goings in the Australian media. And other media tidbits of the day.

In Media Files today, Fairfax is facing a defamation case in Sydney from the CEO of Sports Marketing and Management, the company that manages Olympic branding rights in Australia, and The Australian media columnist Mark Day has called it a day.

Fairfax faces defamation case. Fairfax was facing court this morning in Sydney with a defamation suit over an article written by business editor Mark Hawthorne about Olympics boss John Coates, and his relationship to the company that manages Olympic brand rights in Australia. The article, published in The Sydney Morning Herald in April, alleged that the company, Sports Marketing and Management, had close ties to Coates. The CEO Mark Bushell has lodged the action. The matter had its first case management hearing in the Federal Court in Sydney this morning.

“Enjoy it. Love it. Be curious, be sceptical, be brave — but remember, its not all about you. Your job is to report the world, not to make it spin around you.”

And while Day will still contribute with columns on media and military history from time to time, he’s already enjoying his retirement. He told Crikey via email he’d gone off the grid to go fishing in the Kimberley for a week, where he caught this Blue Bastard (aka Painted Sweetlip), which he said was very rare in the waters around Kuri Bay. 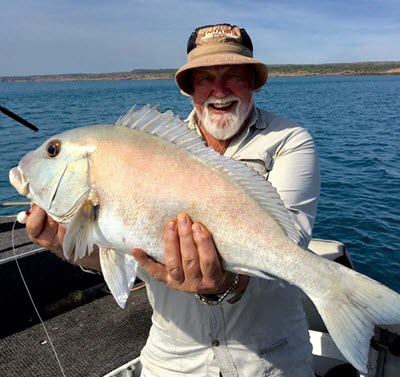 Revolving doors. Also moving on, BuzzFeed Australia political editor Mark Di Stefano has confirmed he’s leaving his job (which is now open) to move to London with his fiancee. Di Stefano has been in the role for three years, is formerly of the ABC and is a regular commentator. 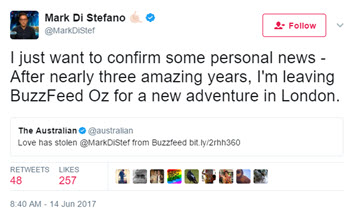 Writers reject copyright reform. Some of Australia’s leading script writers have signed a rejection of the Productivity Commission’s recommendations on copyright. The report was released in December, which found that copyright laws were skewed too far in favour of copyright holders, “to the detriment of consumers and intermediate owners”. One of the key recommendations was to introduce a fair use exemption to copyright laws.

The Copyright Agency has been critical of the report, and issued the statement yesterday, which was signed by writers including some that worked on Animal Kingdom, Strictly Ballroom, Underbelly, Offspring, Muriel’s Wedding:

“Australian writers have a right to receive fair payment for their work and to work in a thriving industry with the ability to invest in the Australian story-telling that entertains millions of people each week on stage and on screen. The changes to Australian copyright laws being pushed by the Productivity Commission, large organisations and big technology companies will threaten our jobs, the jobs of future writers, and the livelihood of our industry.”

They used the statement to ask the Parliament to rule out the recommended changes.

Hundreds of jobs go at Time. Time Inc has slashed 300 jobs in a cost-cutting drive. The company, which publishes Time, People and Sports Illustrated, will lose about 4% of its workforce under the restructure, according to the Financial Times. The company was going to sell earlier this year, before backtracking, and CEO Rich Battista told MarketWatch the company was “re-engineering our entire cost structure”. “We’re trying to be as nimble and efficient as possible, and get this process moving,” he said.

Glenn Dyer’s TV Ratings. It was Seven’s night easily in the metros and regions. Nine did poorly and Ten did OK thanks to a solid night for Masterchef (1.25 million nationally). Seven’s First Dates (790,000 nationally) and Nine’s Love Child (784,000 nationally) were very weak, verging on flop territory. Seven’s House Rules was a bit of program spakfilla with the “top 10 reveals” — it was designed to milk the audience and it worked, with 1.24 million viewers nationally.

Love those alternative names for that fine fish – one is entirely appropriate for Day, tuther not so much.