Fad toy website turns out to be spin. A tipster has got in touch with a warning about the explosion of fidget spinners among the children of Australia. The problem is not how obsessed the kids are, which is hard to miss if you have a human under the age of 15 in your life. For those blissfully unaware, fidget spinners and fidget cubes are small toys that can be held in one hand and are promoted as relieving stress and assisting concentration for kids who struggle to pay attention.

But our tipster says an online retail outfit calling itself “Fidget Australia” has disappeared with no sign of when toys that have been ordered will be delivered. The tipster says he placed an order with the site last month and was told his product would be shipped within five days. Six weeks and repeated attempts at contacting the company later, there is still no sign that anything has been put in the post, and the website has gone offline. The domain is registered to a residential address in Brisbane, but there is no corresponding business name registered with ASIC and no ABN or contact details other than an email address listed on the website.

When Crikey tried the email address to ask questions about the business, we got an auto-reply telling us our order would ship in five business days. There are many similar sites, all with variations on the theme “Fidget Spinners Australia” — similarly without contact details or information about where the business is based. Know more about how this works? Get in touch.

The Daily Prophet. The news yesterday that Australian Tax Office Deputy Commissioner Michael Cranston had resigned from his post following allegations of tax fraud against his son and charges of acting improperly wouldn’t be new to readers of the paper version of The Daily Telegraph, which oddly ran with the story last Friday in print, but nowhere else. The yarn, billed as an exclusive by Janet Fife-Yeomans and Nick Hansen, ran with the subheading “tax chief quits with kids in court over $165m scheme,” but Ms Tips and her spy couldn’t find it online anywhere, and it wasn’t followed up by other media. 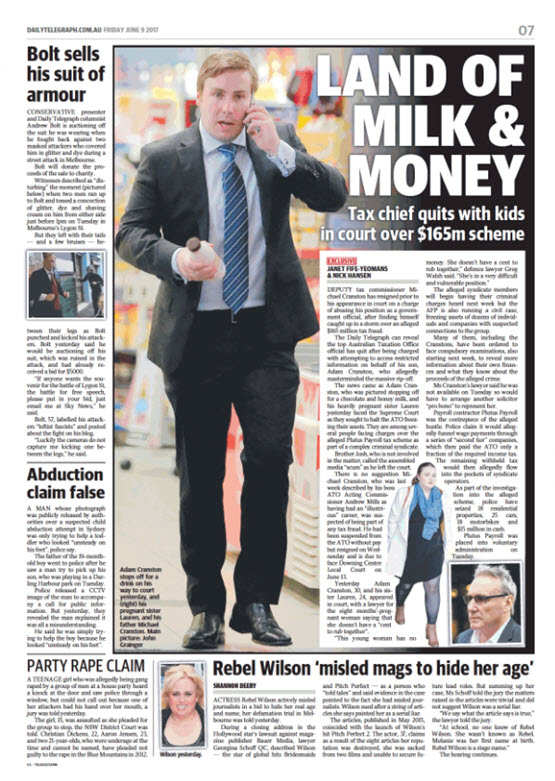 “Deputy chief commissioner Michael Cranston has resigned prior to his appearance in court on a charge of abusing his position as a government official, after finding himself caught up in a storm over an alleged $165 million tax fraud”. 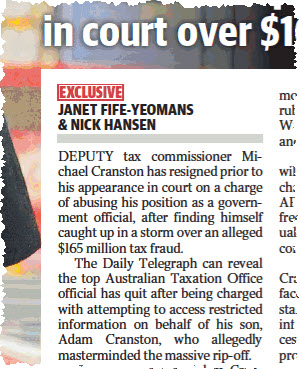 So what happened between Friday and today? Why didn’t the article go online? If you know, get in touch.

“Wonder what the Greenie keyboard warriors who like to abuse conservation hunters, who truly get out there and PROTECT wildlife by tracking down poachers and shooting them on sight, will do. Yes the penalty in Zimbabwe for poaching elephant and rhino is death, no trial, just instant justice….. should warm the heart of any animal rights dick head.” 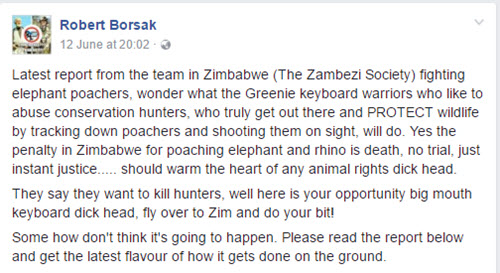 It’s one of the most twisted and illogical positions we’ve ever seen when it comes to hunting and poaching, and we just aren’t sure what to make of it.

Think Borsak is saying this
https://en.wikipedia.org/wiki/Slacktivism
But that’s not the way to do it.

I wonder if ‘conservation hunter’ is in the same rightard lexicon as ‘humanitarian bombing’ & ‘collateral damage’?

Not so much. They’re about things like wetlands preservation, rather than drainage, and things like that. Of course, there’s a motive attached.