Australia is a high-tax country with a spending problem? Not so fast …

The Coalition government has been telling us since being elected in 2013 that the government does not have a revenue problem, it has a spending problem.

Allow me to repeat that for emphasis: only 15%  of the Australian population agree with the government’s “spending problem” narrative and its solution.

What are the government services that people want more government spending on? No prizes for guessing that topping the list are health and education, with 88% and 81% respectively (note: this is a separate question, and people can advocate more spending on health or education without advocating an increase in total expenditure).

What may come as a surprise is that nearly half the respondents believed we should be spending more on social security. This is despite ongoing rhetoric about lifters and leaners, taxed and taxed-nots and seemingly never-ending efforts to squeeze more government savings out of the social security budget. 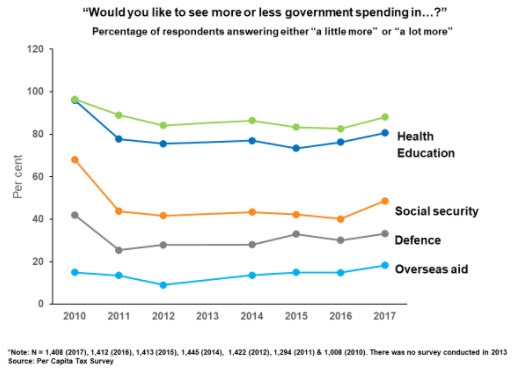 While many survey respondents indicated that they would personally be prepared to pay higher taxes for this extra expenditure, the overwhelming majority felt that big business and wealthy individuals weren’t paying enough (82% and 68% respectively).

To further investigate attitudes to tax and government spending we asked respondents whether they thought, when compared with other developed countries, Australia was: a high-taxing, big-government country; mid-range-taxing; or low-taxing, small-government country. An outright majority (51%) believed that Australia was a high-taxing country, and 38% said mid-range. Only 4% of respondents correctly identified Australia as a low-taxing, small-government country. We are the sixth-lowest taxing of the 36 OECD countries, with only Switzerland, the United States, South Korea, Chile and Mexico having lower tax-to-GDP ratios than Australia. 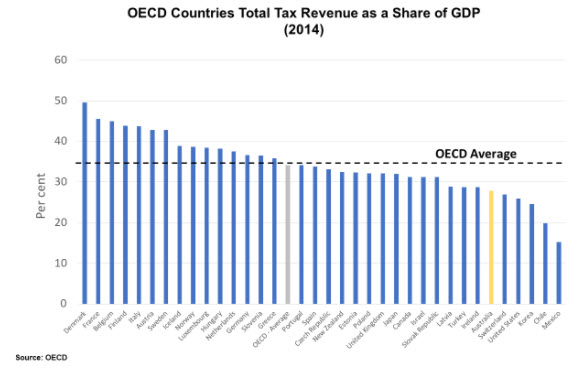 One of the very interesting things about these results is that the majority think we should be spending more on government services even though they think we are already a high- or mid-range-taxing country. Imagine what these figures would be like if they knew the truth.

* Warwick Smith is a research economist at progressive think tank Per Capita. He tweets at @RecoEco

The case for why Australians should pay even more tax

What we think of our health system

What an eminently sensible group of human beings we are. Who would have thunk it, given the air-time and decibel level that the right wing blowhards get.

Of course, most of us didn’t go to wealthy private schools and onto highly paid corporate gigs adding no value to the body politic or social, and therefore aren’t fully aware that we are here only to feed the greedy maw of business and the wealthy.

The first graph stunned me – although the number wanting more spending is rising in only one category do more people want more spent than than in 2010
Overseas Aid!
Despite concentrated denigration, deceit and relentless propaganda for the last 7 years from the usual suspects.
If true, well done Australia.