Talk about bad timing ... the plane that suffocates its pilots ... dress for success ....

There’s bad timing, and there’s ACBC timing. We have to admire the courage of the Australia China Business Council, which is charging ahead with its “premier event” in Parliament House on Thursday, a “Canberra Networking Day”. As the revelations continue from Fairfax and the ABC about links between political figures and Chinese business leaders with connections to the Butchers of Beijing, the ACBC, headed by former Victorian premier John Brumby, will host Julie Bishop, Bill Shorten and the Chinese ambassador in “a unique opportunity for Australian businesses engaged in China to exchange ideas on the future of the Australia-China relationship”. One idea they might be exchanging is the pending ban on foreign donations, designed to put an end to Chinese businesses sending six-figure donations to political parties. And perhaps the Chinese ambassador, Cheng Jingye, might want to address the small matter of Chinese government harassment of students and journalists in Australia.

Onward Christian soldiers. Last month we reported that the Australian Christians were considering joining Cory Bernardi’s Australian Conservatives party, to add to the right-wing parties Bernardi is colonising. Now the party has told its members that it will start the process to shut up shop and fold into Bernardi’s broad church:

“The State Executive’s recent meeting with Senator Cory Bernardi in Adelaide, which went for nearly three hours, was very fruitful. At the recent meeting of the AC Victorian Council, at which a report of the meeting with Senator Bernardi was presented and discussed, Councillors voted unanimously that AC Victoria should cease operations, and encourage its members and supporters to join with Australian Conservatives, which share our common values.

To allay members’ potential concern that this initiative may shift AC away from its Christian roots, it is reassuring to see on the Australian Conservatives’ website under Civil Society, one of four of “the new AC’s” guiding principles, it states: The values, customs, conventions, and norms of the Judeo-Christian tradition are the foundation for western culture and provide the appropriate framework to inform and guide a free society. Without adherence to these enduring structures and an associated rejection of moral relativism, society induces its decay.
Central to this is recognition of the importance of the natural family as the best possible institution for the nurturing and development of future generations and its role as the foundation of society.”

In last year’s federal election the Australian Christians garnered just 0.12% of the vote in the Senate in Victoria, so this most likely won’t mean we can see a Bernardi team coming from Victoria, but it does mean just one fewer column on the ballot paper.

Flying heap of crap watch. If you get a sense of deja vu reading this, don’t worry, we also get one writing it. The beleagured F-35 Joint Strike Fighters have once again been grounded by the US Air Force, this time because of five incidents where pilots “experienced symptoms of oxygen deprivation,” according to the news website Defense One. This comes after a litany of problems with the aircraft, which have led to cost and delivery blowouts, all the while we are assured everything is just fine. In March we got to see the issues up close when the two F-35s on display at the Avalon Air Show couldn’t take off due to inclement weather. The Australian government has committed to spending $17 billion on 72 of these planes.

Spotted. Labor leader Bill Shorten and Senator Derryn Hinch were spotted in business class of a Virgin flight between Melbourne and Canberra yesterday, while the ACT Chief Minister Andrew Barr was down the back in economy, a spy tells us.

Dress to impress. Speaking of Derryn Hinch, never let it be said that the man doesn’t dress for an occasion. At a press conference this morning with Bruce and Denise Morcombe, he wore a red tie, matching the colour scheme of the Morcombes’ Daniel Morcombe Foundation, named for their kidnapped and murdered son. Just an hour later at a press conference to award the press gallery’s Wallace Brown award for the young journalist of the year, Hinch was in a colourful tie. 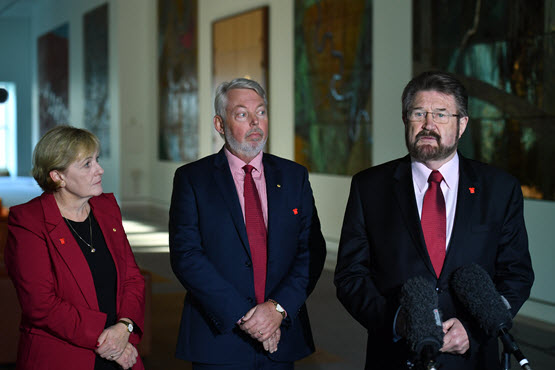 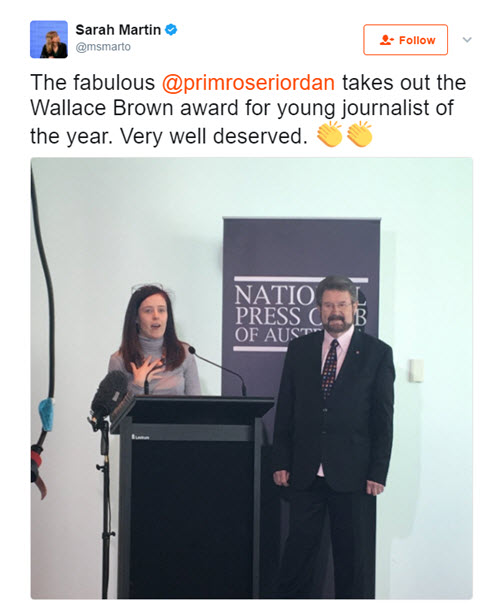 Surely in order to be grounded, a plane has to be able to fly, kinda-sorta?
The Abbottrocity was happy to be photographed in a plywood mock-up of the F(FS)35 cockpit so could we extend this wheeze to the submarines and have them built of similarly resilient material in chwissy’s electorate?
The could be waterproofed with whatever it is that keep his curls so painful looking.

One fewer column on the Senate ballot paper would be most welcome. Does this mean that electoral reforms introduced before the last federal election are having their intended effect? Make vote whispering history!