Who is robocalling against Hanson? ... the weather, with Barnaby Joyce ... love, actually ...

Mystery robocalls. One Nation Senator Pauline Hanson moved to secure an injunction against former party treasurer Ian Nelson yesterday, using the New South Wales court system to put a temporary stay on the release of any recordings he has of Hanson and her chief of staff James Ashby. The injunction also prevents the ABC from broadcasting the recordings it already holds of Hanson and Ashby, which have revealed that the pair were worried about public scrutiny of the light plane allegedly donated to the party by property developer Bill McNee. In an interesting move, Hanson lodged the injunction in the NSW Supreme Court, even though both she and Nelson are Queenslanders.

But the recordings aren’t going away any time soon, especially in Queensland. A tipster based in north Queensland received a robocall using recordings of Hanson and Ashby, saying One Nation has been “plotting to rip off taxpayers” and that Hanson “likes to keep things secret”. The robocall concludes: “Pauline Hanson’s One Nation just can’t be trusted.” The call doesn’t reveal its source, and Ms Tips thought it might be GetUp, which signalled that it would be using robocalls as part of an upcoming campaign against Hanson. We asked GetUp, but the group says the calls didn’t come from them. So who is paying for robocalls against Hanson outside of an election campaign and why? Know more? Drop us a line. You can remain anonymous if you like.

Dutton’s new friends. Immigration Minister Peter Dutton updated his register of interests yesterday to say that he had a caravan refurbished to be used as a mobile office, with the service done by Kedron Caravans — one of the local businesses Dutton campaigned from in last year’s election: 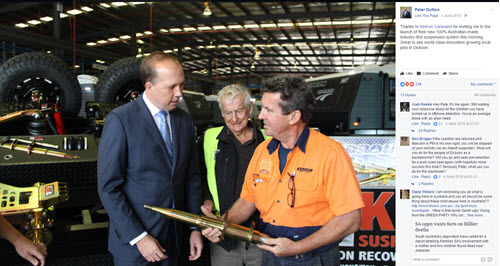 Young conservative love. The names of Daisy Cousens and Calum Thwaites have popped up in the culture wars in the past year, with both young heroes of the anti-political correctness brigade receiving inches and inches of column space in The Australian. Cousens, editorial assistant at Quadrant, has become a figurehead for young conservative women railing against feminism. This week she was featured in an article by Bettina Arndt about “honey badgers” — the name taken on by women who think they need to defend men from feminism. Thwaites was one of the QUT students sued under section 18C of the Racial Discrimination Act by university staff member Cindy Prior. Now, according to Facebook, the pair are an item. We take this news with a grain of salt though — both Cousens and Thwaites have stringent privacy settings on their profiles, and they use their middle names instead of surnames (a standard thing to do for young people in an attempt to make themselves harder to find), but going “Facebook official” is public for all to see. Perhaps we are just too cynical, but if their love for each other is as true as their love for free speech, we wish them well.

Barnaby the weatherman. Is this a new career for Deputy Prime Minister Barnaby Joyce? The member for New England has given weather presenting on the ABC a go, posting the result on Facebook. The video was to draw attention to an announcement for funding for better farm forecasting, which will, we hope, get better analysis than the “really cold” and “really warm” Joyce predicted for large swathes of the country. 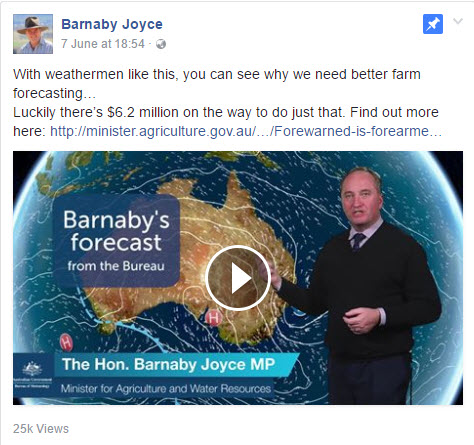 “Hi! Hi! We’re your Weather Girls. (Ah huh)
And have we got news for you. (You better listen!)
Get ready, all you miner lonelys
And leave those umbrellas at home. (Alright!……)

Temperature’s rising, Treasury’s getting low
According to all sources, The Pits is the place to go
Cause tonight for the first time
Just about nighty-night
For the first time in history
It’s gonna start raining anthracite.

God bless the I-P-A, and the Murdoch press,
They went to Uranus, just to sell our sooty mess …… “

Some of your best work Klewso and IMHO you do a lot of great work here.

Thanks MAC, but I couldn’t do it without some of the “best” politicians money can buy and a moth-balled msm.
Jethro does have an inclination to weave his rhetoric to suit his Rube du Jour.
Last week he was slagging off “(foreign) donations buying influence = traechery” – did anyone in our emasculated media remember the Minister for Gina’s “hood ornament” trip to India (with Bishop and Gambaro) for that wedding and contract signing – slugging we tax-payers for he and his wife to get home?
Her $50,000 “contribution” to his campaign fund for re-election in New England?
His using his parliamentary stationery to write to her kids to “knock it off” embarrassing her through the courts?
Not f’ing likely – he’s too much “golden egg fun” and they wouldn’t want to cruel that goose.
As for coal – what are the chances Adani does a ‘McArthur River’ – wanting to expand or walk away (leaving us to clean up); taking cheap options of “rehabilitation” rather than expensive proper ones; contaminating the environment?
Then they want to squeal over GetUp!? Because it’s foreign owned, politically partisan in it’s activities – just like Limited News : but also becoming more effective than Limited News?
But can the rest of our moth-balled media see that – not with their testicular atrophy. God forbid they’d report that news?

And I am aware of an alternate version (to my version of that The Weather Girls ditty) – where ‘sooty’ is swapped for ‘the coital verb’, and which runs
“… Absolutely soaking wet.
It’s Raining Coal! Hallelujah!
Kiss my R-sole(?)! Amen!….”

On reflection, it would be of greater benefit to Oz to have Cousin Jethro forecasting the weather than carrying out duties as an MHR let alone a deputy PM.

I just hope that we don’t lose the traditional “graziers’ warning for the SW Slopes” which I’ve always found to be oddly comforting, a reminder & reassurance that AGW is not going to fry us all in the field.